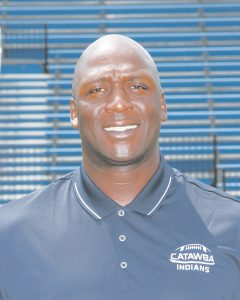 SALISBURY  — No one is panicking, but the Catawba Indians obviously are concerned with their offensive struggles in a 34-3 loss at West Georgia, which has been elevated to a No. 13 ranking in Division II.

There are 155 Division II teams. After Week 1, Catawba’s offense ranks 139th. The Indians didn’t run or throw efficiently on Saturday. They rank 132nd nationally in passing; 117th in rushing.

Saturday wasn’t pretty. Catawba had to punt 10 times and turned it over three times. Catawba was a woeful 2-for-17 on third-down conversions.

“There was a spark here and there, but we never could ignite a fire,” Catawba head coach Curtis Walker said.

Catawba’s 195 yards of offense marked the lowest production for the Indians since a weather-dominated contest at Limestone in 2015 in which Catawba completed only two passes. Catawba’s three points were the fewest it has scored since a brutal 6-0 home loss to Limestone on another day with miserable weather conditions  in 2016.

“We had an electrifying offense last season,” tight end Jourdan Osinskie said. “We lost very good players, but we’ve replaced those guys with more good players. We just need to play with confidence and with excitement.”

Osinskie, a 6-foot-3, 230-pound athlete who can fly, is critical for Catawba’s offense and probably is the team’s best prospect for the next level. He was healthy for nine games last season and accounted for 30 catches, 400 yards and three TDs.

Osinskie had four catches for 49 yards on Saturday and was named Catawba’s offensive player of the week. He was double-teamed frequently and held frequently. Several of West Georgia’s penalties were incurred trying to deal with Osinskie.

“He did a good job in a tough ballgame,” Walker said. “He got his helmet knocked off a few times, but he kept fighting. He drew a lot of attention from West Georgia’s defense.”

While Osinskie figures to be the key to Catawba’s aerial attack, Kenyatta Greene leads the ground forces.

Greene finished 2017 in phenomenal fashion against Lenoir-Rhyne — 220 all-purpose yards, including 142 rushing — so he was the other focal point of the West Georgia defense.

Catawba’s first play from scrimmage was a Greene rushing attempt for a loss of 2 yards. On the next snap, Greene was stopped for no gain to put Catawba’s offense in a difficult, third-and-12 situation.

Catawba’s second possession started with a Green run for a loss of 3. He didn’t have a positive play until his fourth carry when he got a single yard, as Catawba inched its way toward the Brackman field goal that provided the only points of the afternoon for the visitors.

Down 7-3 at the half, Catawba came out for the second half determined to get Greene more touches. He responded. He produced carries of 11 and 14 yards to move the chains and had six carries for 40 yards in the quarter.

“They did have a pretty good defense, but we were getting outside more in the second half,” Greene said. “I got loose a few times.”

The game got away from Catawba suddenly. West Georgia blew it open with three touchdowns in a five-minute span.

That’s why Greene got only one carry in the fourth quarter. He finished the opener with 17 carries for 52 yards.

“That’s very modest yardage for him, but we were in a situation where we had to throw in the fourth quarter,” Walker said. “We want to be balanced, so we’ve got to do a better job in the passing game to loosen things up for Kenyatta, to help get him going. There are things we’re still trying to put together.”

Greene, who had blinding speed, worked diligently over the summer back home in New Jersey, running and lifting. He’s gotten a little bigger (5-9, 175) and has set lofty goals for this season.

“I don’t want to do what I did last year, I want to do better,” Greene said. “But the big goal is winning. If we win, the individual things will take care of themselves.”

Catawba QBs were 13-for-40 with two interceptions on Saturday. Reid Carlton, the starter, threw a pick and had some struggles, but he still fared better than Ken Avent III who replaced him in the second half. Carlton will start Saturday’s 6 p.m. game  against Winston-Salem State at 15,000-seat Bowman-Gray Stadium.

“Reid is our starting quarterback,” Walker said. “That hasn’t changed.”

Despite the lopsided final score, linebacker L.J. Melvin was everything Walker hoped he would be. He made 10 tackles. He was Catawba’s defensive player of the week and also earned the “Catawba Chief” award, as Catawba’s best overall player.

“L.J. didn’t just lead us in tackles, he was that leader on defense that we’re looking for,” Walker said.

The heat in Georgia wore down the Indians, who aren’t as deep as West Georgia. Catawba’s top players such as Osinskie, Greene and Melvin also play on special teams.

“It was hot and humid, not a cloud in the sky,” Melvin said. “What we learned as a defensive unit is we’ve got to keep pushing for 60 minutes. But we’ll be fine. I liked our energy and our camaraderie.”

An unsung hero for Catawba (0-1) was receiver Anthony Stanley. He was special teams player of the week because of his coverage on kicks.

Saturday’s game with Winston-Salem State (1-0) could be a pivotal one for Catawba’s season.

Winston-Salem State miraculously won,  23-20, against UNC Pembroke in a game played on Sunday. Kerrion Moore grabbed a tipped pass and sprinted for his third touchdown with 30 seconds left to play.

“She’s still a Ram at heart, but she’ll be a Catawba fan this week,” Curtis said.

Like a lot of Catawba fans, the Walkers will be looking for increased offense this week. Osinskie and Greene will be keys.

“Kenyatta brings everything,” Osinskie said. “Just give him the ball and watch the magic happen.”