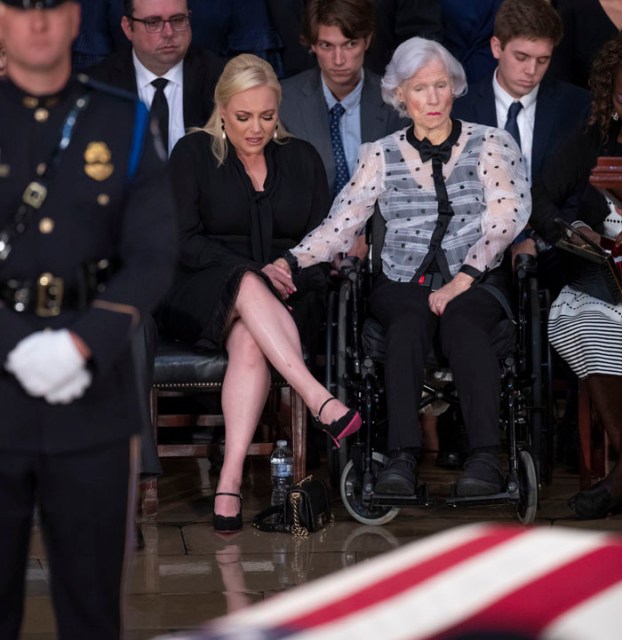 Dr. Ada Fisher: Funerals were not our finest hours

After becoming prime minister of a coalition government, Winston Churchill on June 18, 1940, delivered to the House of Commons of the United Kingdom an exaltation to that nation to remember this was their finest hour. In the past week, the nation has lost its soul with the passing of Aretha Franklin and a soldier who served honorably in one Sen. John S. McCain.

If America is to be great, then we must act accordingly, not just engage in draining the swamp or crying a river of tears. When Bishop Charles H. Ellis III at Franklin’s funeral questionably put his hands a bit high on Ariane Grande’s waist,while Bill Clinton leered at her outfit, one had to question such piggish behavior. When several eulogists during McCain’s final tributes made it about him and President Trump instead of just McCain, the behavior exhibited was not our finest hour. It grieves a nation when even in death we cannot seem to “Let It Be” as Paul McCarthy wrote in tribute to his mother.

People are taking tributes as an occasion to rewrite history to their liking, not as memorials to those beloved by many with whom we may disagree. If the racism intrinsic in the Civil War is to be extricated, how then will people recognize its misguided truths if all remembrances are torn down and such is not to be spoken? In the quest for “political correctness” what will be next?

The “Me Too” movement’s demands could very well see the same for those who have been inappropriate with the opposite sex. Cape Kennedy has lost its name. Will Kennedy Airport be next? Even J. Edgar Hoover and Martin Luther King Jr. had some questionable stuff in their files. If “moral purity” is to become our new marker, who will be left to honor?

George W. Bush was quiet during Barack Obama’s presidency, allowing him the courtesy of time to effect his plans. Only one American president can serve at a time. The chiming in on events by people of previous administrations who didn’t have the will to tackle tough issues — immigration, trade imbalances and judicial reform — during that presidency shows their cowardice in the face of demanding national priorities.

On “First Take,” guest commentator Will Cain noted that not everything being called racist is racism but rather may reflect on “tribalism” — where each group intrinsically is motivated to cling to its own and try to establish and preserve that essential part of who they are. To expect others to join in is probably ludicrous without significant buy-in based on nationalism, not individualism. Each ethnicity, sexual grouping, affiliation or other interest will try to keep its uniqueness whole even in the face of merging realities.

Such is a misunderstanding of the Trump Train whose passengers are tired of the perceived “Deep State” and cloistered relationships among the rich who are seen as exploiting them while giving to others perceived as not earning the same rights. How ironic that one of the richest is their leader. It will be interesting to see what the next move will be, but don’t count Trump out.

The poison of racism is used for a political hatchet attack. In doing so, it chops at the fabric of... read more