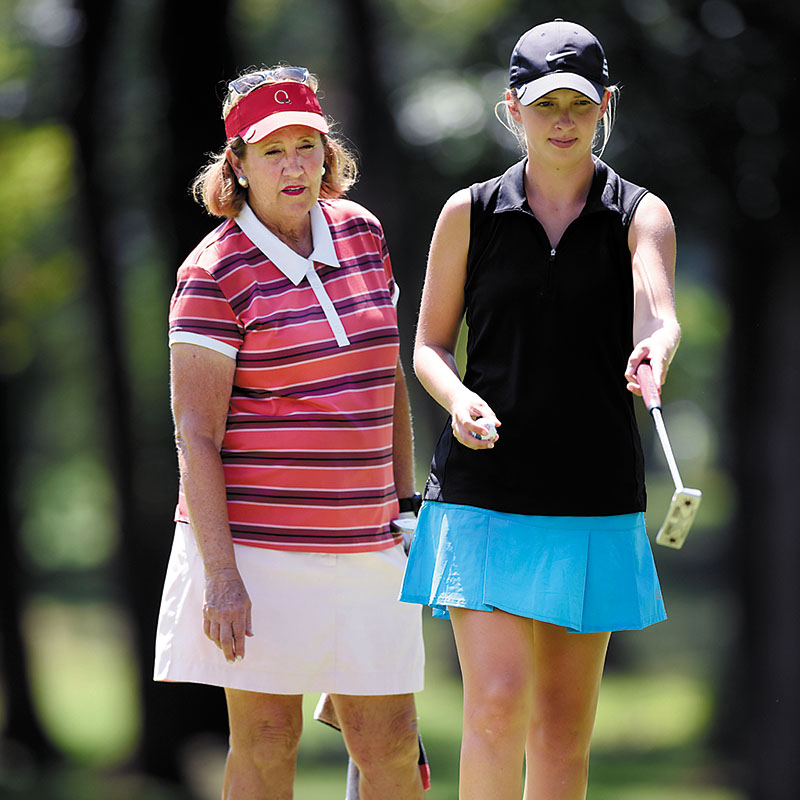 Barts scored five birdies in 13 holes, leading her team past Susan Morris and fellow Catawba player Sandra Brink, 6 and 5. Barts’ two-foot putt on the par-5 13th hole ended the match and the seven-year championship run in the event by Allison Adams.

Adams and teammate Micah Furr lost in the semifinals to Morris and Brink, 3 and 2, in a match that was suspended by darkness on Sunday and concluded Monday morning. In the other semifinal, Barts and Carlton eliminated Cindy Carmazzi and Sarah Coltrane, 4 and 3.

Adams and Furr won the title in 2016 and last year, after Adams and Grace Yatawara won five straight championships.

Barts’ torrid play was definitely the key on Monday afternoon. She was on pace for a 5-under par round, had play not stopped on No. 13.

“It feels amazing, especially with it being our first year out here,” said Barts, a junior from Apex who was second team All-South Atlantic Conference for Catawba last spring. “I didn’t really know what to expect, but we did it!”

Barts birdied the first hole in the title match, and also holes 7, 9, 11 and finally, No. 13. When she dropped in a six-footer for birdie on No. 11, even her grandfather, standing nearby, was impressed.

“She’s dialed in,” said Jim Wolverton, of his granddaughter.

That birdie gave Barts and Carlton a five-hole lead and her clutch par putt (another six-footer) on No. 12 kept the margin right there. Morris had a par on No. 13, but Brink bogeyed the hole. Barts then closed out the match.

“Today (Monday) was my best of the tournament,” said Barts. “Sunday, I had trouble with my driver but today, I hit every fairway, so that was a start. And getting dialed in with my irons makes it easier to putt. Everything just felt good. The swing felt great and I was hitting fairways and greens.”

The women’s division of the Labor Day event has struggled in the past with enough participation to complete an eight-team flight. Carlton contacted Catawba golf coach Sam Gealy with hopes of changing that trend.

“We had talked about this for three years and about a month ago, Kathy called me and asked if there was a possibility,” said Gealy. “I told her we would have four girls, but we didn’t want them to play together, but to be paired with someone else. So it worked out really well.”

The addition of the Catawba golfers actually led to nine teams for the flight, so one was eliminated after qualifying scores were in.

Carlton seemed just as excited about the bigger field as she was about winning the championship.

“I think bringing in the Catawba golfers has really ignited some interest,” said Carlton, at the trophy presentation. “I think it’s time that we had more women involved in this tournament and this was just the beginning. Next year, we hope to double what we had this year. I think there will be more interest going forward — with some new faces.”

According to Gealy, the Catawba players were eligible, since the college’s golf season has not officially started yet.

“It was a good experience and great opportunity for us, before our season starts,” added Gealy. “And Kaley played really well throughout the tournament. When she’s hitting it well, she’s like a machine. And it was good for Sandra because she just got here from Sweden.”

Brink is from Stockholm and a junior transfer from West Virginia Wesleyan. She is just getting settled in Salisbury.

“I had a lot of fun,” said Brink. “I played well. I could have made more putts, but I did alright, I think. I really enjoyed playing with Susan, and really, playing with everyone here.”

Morris, a veteran of several championship matches, was not down about the loss.

“It was great to have Sandra and we played good,” said Morris “We played better on Saturday with eight birdies, but today was just not a birdie day for us. We did the best we could, but they were just better today.

“More participation is what we’ve been striving for and we’re so appreciative of Coach Gealy for working with us,” continued Morris. “I give Kathy Carlton a lot of credit for working with the Catawba coach and getting more players out. We’re just excited that maybe more people will see what a great time we had and more women will participate because it’s about fun and camaraderie.”

Adams was there, one of the first to congratulate the new champs, as well as the runners-up. She admitted it felt a little strange, not playing in the title match.

“I’m at the pool … I haven’t had a Labor Day off in seven years,” joked Adams, a local teacher, wife and mom. Her husband is Frank Adams III, a professional golfer. Furr, Adams’ teammate, is a student at N.C. State.

“Micah and I played as well as we could, but every time we made a move, either Susan or Sandra would make a putt,” Adams said, of their semifinal match. “Down three holes on No. 9, I made a 40-footer from off the green for birdie but then Susan made one from about 25 feet, right behind me, to halve the hole. Stuff like that made it tough. Susan and Sandra played great.”

NOTE: Adams’ father, Ed Dupree, who died last November, was a former Salisbury Post sports writer, runner, youth track coach and avid golfer. Adams’ husband had Ed’s driver cut down and re-gripped for her, and she used it during the tournament. But it was tough for Adams, playing without her No. 1 fan following along.

“I felt dad behind me,” said Adams, her voice cracking with emotion. “When we made the turn on Sunday down three, and it’s either do or die, I got a little boost, thinking about him. His driver is now the best club in my bag.”

The competitive Adams, a former East Rowan High and Catawba student athlete, added that she’ll work at trying to start a new streak.

“It’s great to have more teams than a flight will hold and it’s give us something to shoot for,” she said. “Micah and I will be back next year … we’re going to play for sure. That was decided about five minutes after we finished — don’t think it was ever a doubt.”