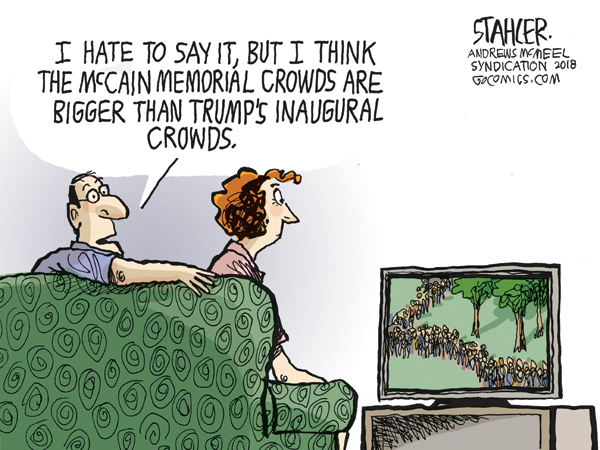 When dictators took over countries such as Germany, Italy, Russia, Argentina and Venezuela, the body politic had usually already been weakened by war, depression or chronic misrule – and often all three. Today, the United States faces a threat from a would-be despot of its own: a president who incessantly undermines his own Justice Department, calls for his political opponents to be investigated and locked up, denounces the press as the “enemy of the people,” and lies incessantly while telling his followers that they must trust whatever he now says over what the media report or even over what he himself was previously recorded as saying on video.

Our big advantage – what sets us apart from countries that have succumbed to authoritarianism in the past – is that the American body politic is relatively healthy. We have a 229-year-old tradition of the rule of law, the economy is strong, and robust checks and balances continue to operate. The most notable check and balance is, of course, special counsel Robert Mueller III, who continues quietly racking up indictments and convictions.

President Donald Trump has tried with all his might to undermine what he calls a “Rigged Witch Hunt,” but to judge by the evidence of the latest Washington Post-ABC News poll, he is failing: Only 36 percent of those surveyed approve of the president, while 49 percent support his impeachment and 63 percent back the Mueller investigation. Assuming the poll is not simply an outlier, it suggests that the body politic is rejecting the Trumpist infection.

Further evidence of that rejection came Saturday with the moving funeral of Sen. John McCain, R.-Ariz., at Washington National Cathedral. The entire political world, Democrat and Republican alike, came together to honor an American hero. Two former presidents spoke; a third sat in the front row. Conspicuously absent was the current president. He was not welcome – and not missed.

Every eulogy for McCain was also, implicitly, a rebuke of the president who denied that McCain was a hero. When former Sen. Joe Lieberman, I-Conn., extolled McCain for exemplifying values at odds with “the tribal partisanship and personal-attack politics that have recently characterized our life,” when former President George W. Bush praised McCain for his reminding us that “We are better than this, America is better than this,” when former President Barack Obama noted that “so much of our politics, our public life, our public discourse, can seem small and mean and petty, trafficking in bombast and insult and phony controversies and manufactured outrage” – there was no doubt who the speakers or the audience were thinking of. They had in mind a president who spent the morning not honoring McCain from afar, but giving vent to his pathologies on Twitter before hitting the golf course.

Subtext became text when the senator’s daughter, Meghan McCain, delivered the most powerful and passionate eulogy I have ever heard. “We gather here to mourn the passing of American greatness – the real thing, not cheap rhetoric from men who will never come near the sacrifice he gave so willingly, nor the opportunistic appropriation of those who lived lives of comfort and privilege while he suffered and served,” she said. When she added that “The America of John McCain has no need to be made great again, because America was always great,” the entire assembly, more than 4,000-strong, erupted in thunderous applause of the kind I have never seen before at a funeral.

I was sitting there, and it was an electric moment. This represented a collective rejection by America’s entire political class of the dishonorable, dishonest and divisive politics represented by Trump – and a yearning for the ennobling and principled leadership represented by McCain. When everyone stood near the end of the service and we all sang the final stanza of “America the Beautiful” (“O beautiful for patriot dream …”), I am sure I was not alone in seeing it as a symbolic rejection of the ugliness of the Trump years. Maybe I was imagining things, but I think not. It tells you something when simply extolling the virtues of America can seem like a criticism of its president.

I have come to feel pessimistic lately about the future of America – demoralized because so many of my fellow citizens have endorsed a demagogue who threatens our democracy. But the McCain funeral offered a welcome moment of hope and grace – a promise of deliverance – at a dark time in our nation’s history. It affirmed what McCain himself said in his farewell statement when he affirmed his “heartfelt faith in Americans.” “Do not despair of our present difficulties but believe always in the promise and greatness of America, because nothing is inevitable here,” McCain counseled. “Americans never quit. We never surrender. We never hide from history. We make history.”

I despair today a little less after the uplifting spectacle of the McCain funeral. I left feeling, as no doubt the funeral’s architect and honoree intended, re-energized in my desire to fight for the principles that he dedicated his life to. I hope others feel the same way. Together we can restore the tarnished beauty of America.

Max Boot, a Washington Post columnist, is the Jeane J. Kirkpatrick senior fellow for national security studies at the Council on Foreign Relations and a global affairs analyst for CNN. He is the author of the forthcoming “The Corrosion of Conservatism: Why I Left the Right.”

Labor Day was the saddest day of the year when I was young. It signaled the official end of summer... read more