Pray Rowan: Residents come together to pray for county 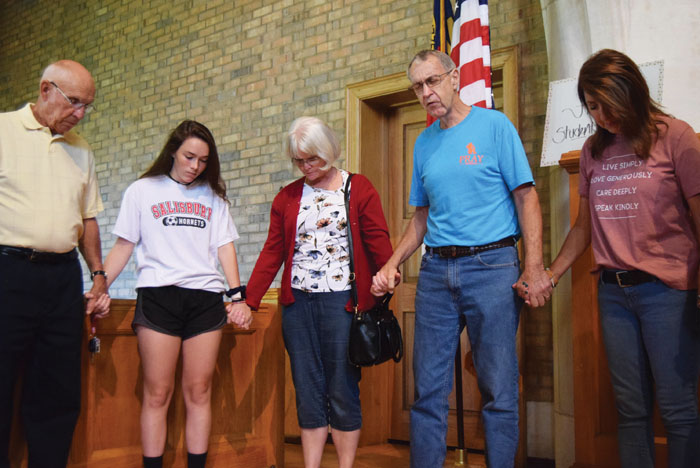 Community members gathered Saturday to pray for the county and for each other. Rebecca Rider/Salisbury Post

SALISBURY — Rowan County residents gathered Saturday to prove that anything is possible through the power of prayer.

It was the second major gathering of Pray Rowan, a local group that met for the first time last October in response to rising local and national tensions. Nearly 500 people attended that first meeting, held on the courtyard steps in downtown Salisbury. Saturday’s gathering may have been smaller, but it was no less sincere.

“We hope to see healing and restoration happen in our community,” said Tonya Skelly, a Pray Rowan organizer.

Saturday’s gathering was held in Omwake-Dearborn Chapel at Catawba College and featured music and speakers from the school’s student body.

In the past year, Skelly and others have met monthly for prayer meetings. It’s a record that surprises her even today.

“I thought (Pray Rowan) was a one-time event,” Skelly said. “I thought it was for a rally, but it’s so much more than that.”

Organizers and those who frequently attend Pray Rowan meetings are firm believers that God hears and responds to prayer.

During larger gatherings like Saturday’s and the original rally, organizers and speakers choose to remain anonymous.

“We don’t use our names,” Skelly said. “We don’t say who we are; we don’t say what church we go to. … We really just want to make it about Jesus.”

Two Catawba students, Abraham Sagaon-Lozada and Henderson Lentz, shared how their struggles with medical problems or close brushes with death brought them closer to God.

Lentz, a sophomore, suffered a cardiac arrest during a basketball game in high school. He was medically dead for 11 minutes before being resuscitated.

“The whole gym just started praying,” he said of his experience.

He credits prayer for his recovery, and he says it has only made his faith stronger.

“God is willing and able to answer any request that we have,” he said.

Sagaon-Lozada, also a Catawba sophomore, talked about his struggles with hemophilia as an athlete. In high school, he almost had to have his leg amputated because of an injury. Just this year, he was forced to retire as an athlete because of a shoulder injury. Through it all, Sagaon-Lozada struggled with doubt and faith.

But in the end, he said, the experience made him stronger. He now plans to pursue a career as a pastor.

“I believe that in order to understand God, you have to truly surrender to him,” he said Saturday.