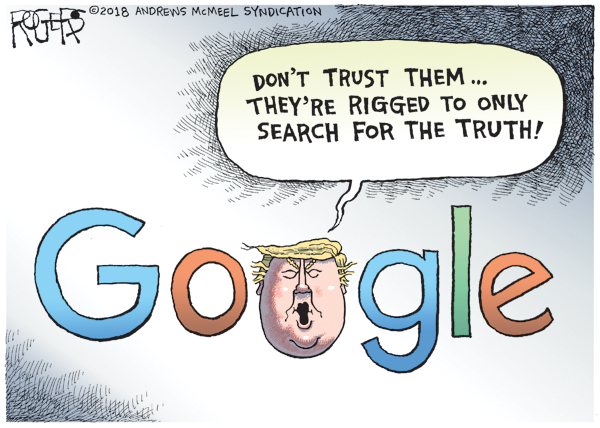 Other Voices: President should stop Googling himself

President Trump fired off an angry Twitter broadside against Google before the sun rose Tuesday, accusing the search company of skewing its results in favor of “fake news” outlets at the expense of conservative ones. Relying on reporting from the right-of-center PJ Media site, Trump asserted that Google had “rigged” its search results to “shut out” stories about him from conservative and “fair media” outlets.

He went on to broaden his accusation: “Google & others are suppressing voices of Conservatives and hiding information and news that is good. They are controlling what we can & cannot see. This is a very serious situation-will be addressed!”

It doesn’t take much of a look to recognize what’s going on here. Famously thin-skinned, Trump doesn’t like the barrage of criticism he’s getting online, much of it delivered in the form of news and opinion pieces from the country’s mainstream media. So in addition to trying to discredit those outlets as “fake news,” he’s now trying to sow distrust in the search engine that leads people to them — and, worse yet, threatening to take action against them.

Yet Trump has company on this issue. It’s become an article of faith in some conservative circles that tech companies are warping their products and services to discriminate against conservatives. Among other pieces of evidence, these critics point to incidents on Facebook, YouTube and Twitter that, they argue, show companies disproportionately downgrading or blocking content from conservatives. …

For its part, Google insists that its only goal is to deliver relevant search results, and that its engineers “never rank search results to manipulate political sentiment.” The company won’t say exactly how its continually updated search technology does work, however — that’s a closely guarded trade secret.

Still, there’s an easy way to judge whether Google has, in fact, cleverly rigged its search engine to elevate bad news about the president over the hosannas of a grateful nation. Search for Trump news on another site — Microsoft’s Bing, say, or DuckDuckGo — and compare the results with Google’s. There will be differences on the margins, but the thrust will be the same. Most of the results will come from mainstream news outlets with large audiences.

Users have to dig a little deeper to unearth links to smaller or more specialized sites. But will they bother? That’s one of the things that critics of the tech platforms assert: The vast majority of internet users rely on the shortcuts that these platforms provide, and won’t bother to hunt for the stories and tweets — conservative, liberal or otherwise — that don’t get promoted.

Research bears that out, at least for Google, where 95% of users don’t look past the first page of links. Don’t blame Google for that. If anything, it’s a sign of a worrisome lack of curiosity among internet users and an apparent disinterest in diverse information sources.

Admittedly, Google’s search algorithm doesn’t rank sites purely on the basis of popularity and authenticity. European regulators fined the company more than $2.8 billion last year for favoring its own shopping service over competing comparison-shopping sites. But the company doesn’t claim to be neutral — it claims to offer results that are relevant, which tells users that it’s doing some kind of filtering.

Some conservatives are calling on the government to use antitrust law against Google and other tech giants that dominate their markets. But Trump seems to be calling for something different: Using the power of government to change how Google’s technology works. Such a big-government solution, turning Washington into a manipulator of search results, would be worse than the supposed problem it purports to solve. The president should stop Googling himself and pay more attention to the duties of his office.

Labor Day was the saddest day of the year when I was young. It signaled the official end of summer... read more