In the Trenches: For golf course crew leader, it’s Man vs. Nature 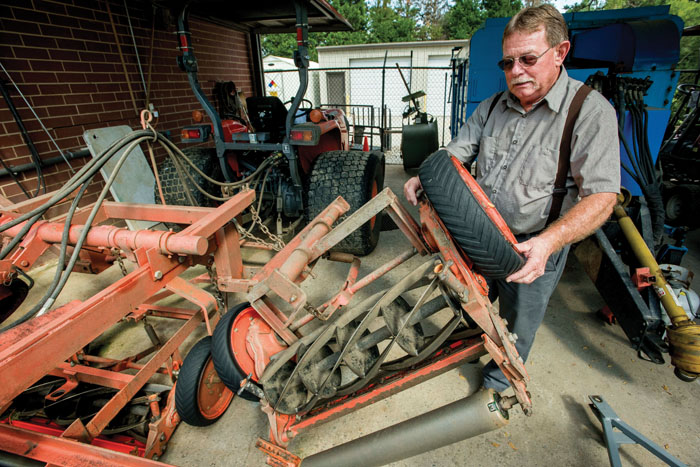 JON C. LAKEY / SALISBURY POST Mike Neely has been a longtime employee of Country Club of Salisbury. Neely maintains and does mechanical work on the most of the equipment used by the grounds crews. Just keeping the blades sharped on the specialized mowers is frequent occurrence. The rotary mowers that cut the tee boxes and putting greens require sharp blades to trim the grass to below 1/8th of an inch. on 8/17/18 at in Salisbury, NC,.

SALISBURY — Mike Neely was literally in the trenches when he realized what he wanted to do with his life.

He attended community college as a young man to learn forestry and did a forestry gig for a short while. Then he worked on cars.

In 1990, he was working in water and sewer, standing in a 16-foot trench in the pouring rain, when he remembered a promise from Ron Bivens: “When I get my degree and get a golf course, I want you to come work with me.”

Amazingly, he bumped into Bivens at Walmart a short time later. Bivens offered Neely the job, and he’s worked at that golf course ever since, a total of 28 years. He maintains the fleet of vehicles that manicure the greens at Salisbury Country Club.

If the mowers notice a change in the color of the grass, they alert Neely that something’s off and he works on the blades.

The golf course, at 100 acres, is mowed every day. Every. Single. Day. In rain and shine, hot and cold.

When it rains hard, the staff uses mechanized rakes to push the sand back into the sand traps. Each vehicle — and there are lots — must have the oil changed every 100 hours of use.

Greens are dressed with sand after maintenance, and sand is hard on the blades. The reel mowers cut grass like a pair of scissors, with a horizontal cylinder of blades spinning against a bed knife. The blades as well as the bed knife have to be sharpened often.

To sharpen the blades, Neely uses a large and loud machine with grinders in it. Nearby is the bed knife machine, a $50,000 piece of equipment that serves just one task: sharpening that immobile striker the blades spin against.

He also maintains and repairs all the engines on mowers, tractors, blowers and golf carts.

The greens staff at Salisbury Country Club is relatively small. The seven men compare to 40 or 50 at a typical large Charlotte club.

In addition to mowing 100 acres every day, the staff trims bushes, pretties up the grounds at the club building and tennis courts, fertilizes, kills weeds, and pushes sand back where it belongs.

It’s a seven-day-a-week war of Man versus Nature, and Neely makes sure everyone has the tools to fight with. They’re a close bunch, he says, sitting at a break table with three kinds of hot sauce in the middle.

“We enjoy one another, joke and carry on. So many of us have worked together so long. We all know each other’s idiosyncrasies and habits. And we take advantage of them. It’s all fun, and we also know where not to go.”

“One guy came in and wore the purple ones,” he smiles, “and everyone called him Barney.”

Maintaining the golf course is a yearlong cycle, mostly centered on the Labor Day Classic.

“End of the summer, we start getting ready for Labor Day. We’ve got practice rounds, qualifying and the tournament. We’ve got to have everything looking pretty good. Then, whew, summer is over.

“Next, ready for leaf season. We maintain the courses in winter, too, and then get ready for spring. Once spring starts, you’ve got a whole mowing season starting back up. Then you’re back to summer getting ready for Labor Day.”

His work at the club came to a screeching halt in 2011 when he was diagnosed with pancreatic cancer.

“I was probably out a year and a half to two years. I had a big surgery on Aug. 25, Whipple surgery. They removed my gallbladder, part of my stomach, the bile duct head of my pancreas, and did reconstruction. I lost 50 pounds or more.”

The Mayo Clinic says of this surgery, “The Whipple procedure is a difficult and demanding operation and can have serious risks. However, this surgery is often lifesaving, particularly for people with cancer.”

“I came home with a feeding tube for a month and had to go back five months later to repair what they call an incisional hernia,” Neely says. “I was hopeful the new incision would be shorter than the first — it runs from my chest to lower abdomen — but they cut it just as long the second time.”

He was a little less sore the second time, he says, but it “set me back a few more months.”

Before the surgery, he underwent chemotherapy every other week.

“I’d come in and work on the weeks in between,” he says. “It helped keep me busy, kept my mind off of it. If you sit and dwell on this stuff too much, it can overwhelm you a little. I’m just fortunate to have made through those times.”

The survival rate for pancreatic cancer is low, with just 5 percent of patients surviving five years or more.

“We caught it, had surgery and good doctors. It’s a bump in the road of life; we just pick up and go from there. There are lots of memories there, but you keep going. There’ll be something else as we get older.”

Neely has been with his girlfriend for 25 years and says she was a great caregiver. She’s also understanding about a job that requires work on weekends and holidays.

“If your significant other needs too much attention, it can affect your work. I’ve only been off for Labor Day twice. If Ron is shorthanded for a weekend, (going to work) is just what you do.”

The club was supportive during the ordeal, Neely says.

“When I was diagnosed, during the treatments between April and August, Ron and the people in the main office put together a Celebration of Life benefit for me. It was a fundraiser, and they invited the members of the club. Lots of people I didn’t know came, and some people who knew me but I didn’t know them.

“It was a big deal for them to come out and donate time and money to help out. It was a lot of work for Ron to organize, and the office staff. The wait staff came in and worked it. You become pretty humble when all that stuff starts happening.”

After surgery, co-workers often made calls to check on him and show him they cared. Today, Neely works part time at the club and then works at home, sharpening blades for school systems and colleges. His health today is good — pretty remarkable for a pancreatic cancer survivor.

“We’ve danced through a pretty tough deal where a lot of people don’t make it. There are so many folks worse off than I was. Some folks dealing with treatments for life. I came out somewhat unscathed.”

Neely says since the illness, his perspective on things has changed.

“Actually my health has become my job. Ron and I talked early on, shed tears: ‘Do you want me to hold your job? What do you want?’ … And this became just a job. It’s the least of my problems. If I’m not here, life will go on. I have to focus on what I’m doing to maintain my health.

“My job was so important to me for so many years. Now it’s not. If Ron needs me, I’ll be here; if the guys need me, I’ll come help. Take care of Connie and the dogs.

“Until you visit death, you never realize how short life is. You revisit the things you really need to do.”

Mike is 67 and not sure he wants to retire.

“We’re not travelers. I’m not sure we’re a 24/7 couple — and she would agree. I don’t think I will ever retire. I think I’ll always be doing something. When I reach 70, I think I’ll still work. But the thought process may change. I find the older I get, I get tired easier.

“Things aren’t as important or pushed as they once were. Maybe I’ll retire when Ron retires. I want to always have something to do. A lot of it is getting out and being involved with people. You can volunteer, things like that, but I like to feel like I’m producing something.

“At this point, I’m taking a day at a time. Taking the near future, but not the distant future.”