US Open tennis getting interesting 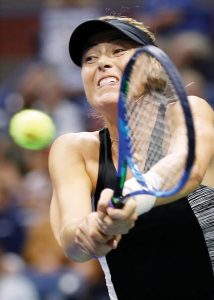 Maria Sharapova, of Russia, returns a shot to Jelena Ostapenko, of Latvia, during the third round of the U.S. Open tennis tournament, Saturday, Sept. 1, 2018, in New York. (AP Photo/Adam Hunger)

NEW YORK (AP) — The most pivotal part of Roger Federer’s U.S. Open victory over Nick Kyrgios, both men agreed, came all of 17 minutes in, when the 20-time major champion was serving at 3-all, love-40 and got out of the jam.

The most spectacular part? That came, anyone who saw it surely would agree, much later. It was the on-a-full-sprint, drop-shot-retrieving, flick-from-a-few-inches-off-the-ground, forehand-around-the-net-post, jaw-dropping winner that Federer conjured up a few games from the conclusion of the 6-4, 6-1, 7-5 tour de force in the third round Saturday.

“A special one, no doubt about it,” declared Federer, who put it up there among his greatest hits, which, considering who we’re talking about, is certainly saying something.

There’s no rule mandating that the ball travel over the net for a shot to count, but Federer pointed out that this was not the sort of thing he can try in practice, mainly because there isn’t as much room to run wide of the court as in a big arena like Arthur Ashe Stadium, so “you will be running into a fence.”

Much was made of Kyrgios’ previous match, in which chair umpire Mohamed Lahyani climbed out of his seat to have a chat with the 23-year-old player about whether he was giving his best effort while trailing by a set and a break. Kyrgios went on to win; Lahyani was chastised by the U.S. Tennis Association for breaching “protocol” but allowed to continue officiating at the tournament.

This time, of course, Kyrgios received no sort of counsel during the match other than all the muttering, at various volumes, he directed at himself. He doesn’t have a coach and wondered aloud, during the latest in a long line of news conferences that sound more like therapy sessions, whether he should add one — or perhaps someone who could help with the mental aspect of the game.

Federer alluded to one particularly questionable choice Kyrgios made at 5-all, 40-15 in the final set, when he went for a drop shot that found the net instead of simply hitting a normal forehand into the open court.

“Clearly,” Federer said, “when you play that way and you lose, it’s always, like, you feel like he’s so much to blame. But that’s just how he plays.”

The contrast between Kyrgios’ mindset and Federer’s was not lost on the talented, if temperamental, Australian.

“We’re two very different characters. Just the way he goes about things, I could take a leaf out of his book. The way he behaves on court. His demeanor,” the 30th-seeded Kyrgios said. “I don’t want to change myself too much, but I could definitely take away things he does in certain situations. He’s the ultimate role model to anyone who wants to play.”

The No. 2-seeded Federer moved into the fourth round at Flushing Meadows for the 17th consecutive appearance. He’s won five titles at the U.S Open, although the last arrived a decade ago.

While he keeps on keeping on, there are all sorts of seeds tumbling from both singles draws.

It’s most pronounced in the women’s field, where 10 of the top 13 seeds already are gone as Week 1 comes to an end. No. 4 Angelique Kerber and No. 5 Petra Kvitova — owners of a combined five Grand Slam titles — exited Saturday, both at Louis Armstrong Stadium, the same new arena where No. 1 Simona Halep and No. 2 Caroline Wozniacki were beaten earlier in the tournament.

Djokovic could meet Federer in the quarterfinals.

First, though, Federer gets what shapes up as a mismatch against 55th-ranked John Millman, who never before has made it this far at any Grand Slam tournament.

“He’s the best that’s played the game, in my opinion,” said Millman, who practiced with Federer ahead of the grass-court portion of this season. “I’ve got a lot of respect for Roger.”

The outcome of Federer vs. Kyrgios might very well have been decided in the very early going, long before Federer’s “How did he do that?!” trick shot in the third set.

In the match’s seventh game, Federer faced a total of four break points. On the first three, Kyrgios missed a shot. On the fourth, Federer snapped off a forehand winner. The game then continued through five additional deuces and Federer held. Turned out Kyrgios would not muster another break chance.

“He loosened up straightaway after that. He started playing some shots that we all know he can make. All the pressure was off him. He’s an unbelievable front-runner,” Kyrgios said. “When he gets in front, there’s not much you can do.”