‘Once in a lifetime:’ Visitors take steam engine for a spin 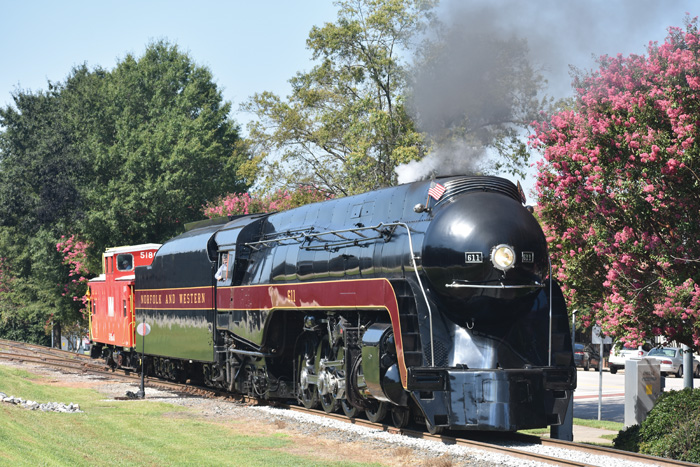 SPENCER — On Saturday, rail fans got to experience the power of steam up close and personal. The North Carolina Transportation Museum is hosting the visiting 611 steam engine for the month of September, and on select weekends visitors can put the engine through its paces.

“At the Throttle” is a special event partnership between the North Carolina and Virginia transportation museums, which allows a small number of train enthusiasts to run the 611 — under the watchful eye of a licensed engineer, of course. The event has been a museum staple since the 611 was restored nearly four years ago. While the engine is housed in Roanoke, Virginia, it still visits Spencer once a year for maintenance and to allow visitors a chance to sit in the driver’s seat.

“It gives them a chance to give it a test run, and it also gives people a chance to do a bucket list item,” said Marcus Neubacher, museum director of administration.

“It’s great. It’s a thrill to show people the power of steam,” he said.

The 611, originally built in Roanoke in 1950, is one of the largest surviving steam engines in the country. And even with technological advancements, the 611 is still up to snuff when compared with more modern engines. Its workings are just as intricate, and its power just as strong. Fed with fire, water and coal, steam power used to run the nation. Now that most businesses have switched over to diesel, electric or other power sources, pieces of machinery like the 611 have been mostly retired from their fields — but they still inspired the dreams of many.

Bill Davies still remembers the trains that used to run through his town as a child — that’s when he fell in love with trains and with steam.

Davies now lives in Asheville with his wife, Jannine, but the couple has a habit of running into the 611. The two have twice ridden on trains the engine pulled, but Saturday was the first chance Bill said he’s had to drive it — or any train.

“This is like the chance of a lifetime,” he said.

While Bill was “pretty pumped” to take the engine for a whirl, Johnny and Andy Weeks were just finishing up their own experience.

Johnny, 62, said he’s always wanted to drive a train engine. He’s always loved trains, and even worked for CSX Transportation. However, he never got a chance to operate an engine.

For Johnny, that day was Saturday. He shared his experience with son, Andy, who is also a rail fan. Andy said the experience was more educational than he was expecting. For example, he didn’t realize how close the fire that powered the engine would be to the engineer’s area.

“I didn’t think the fire was going to be so big or so powerful,” he said.

Johnny added that they could only take the engine up to 10 mph on museum property, which left him wanting more.

Still, it’s another item off his bucket list — one of the last.

While most “At the Throttle” seats are sold out — according to Neubacher there are just a few left for Sunday, Sept. 23 — rail fans can still opt to ride in the engine, or buy tickets to help stoke the fire. Caboose seats are also available for Sept. 22 and 23. Interested guests can also purchase tickets to ride on a train pulled by the 611 — that event will be held Monday. Those rides begin at 10:30 a.m., and end at 2:30 p.m. All ticket proceeds for 611 events will be split between the North Carolina and Virginia transportation museums to help maintain museum pieces and to promote the rich history of transportation in America.

For more information, or to purchase tickets, visit the museum’s website at www.nctrans.org.