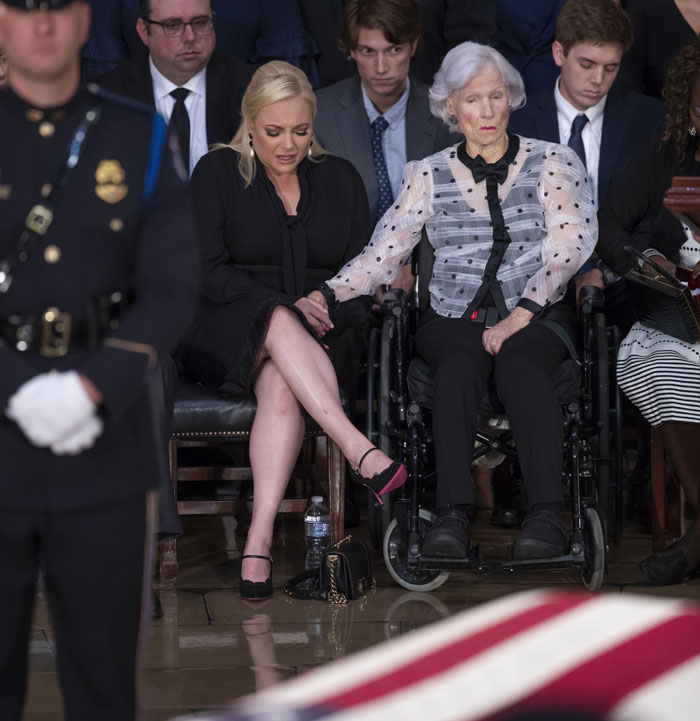 WASHINGTON — When Sen. John McCain died last weekend at 81, the tributes were quick to mention his family’s prestigious lineage within the American military. McCain’s father and grandfather — both of whom shared his name — were the first father and son in Navy history to become full admirals.

But often overlooked is the influence McCain’s mother, Roberta, had on his upbringing and political life. Now, at 106, she has outlived the child she still calls “Johnny,” whose death she faced once before when he was shot down over Vietnam and presumed lost.

Roberta, who lives in Washington, spent years crisscrossing the globe, often alongside her identical twin sister, Rowena, eager for whatever spontaneous adventure came next. She has ridden through the Jordanian desert in the dark of night, hopped a ferry to Macau and trekked through Europe on less than $5 per day.

Roberta and Rowena grew up traveling the country with their father, a successful oil wildcatter who retired young to raise his children. The family would travel for weeks, sometimes along the California coast or by the banks of the Great Lakes.

Those trips would later serve as the blueprints for what Sen. McCain described as his mother’s “mobile classroom” — one that could show her children the world’s wonders in ways a four-walled classroom could not.

“My mother grew to be an extroverted and irrepressible woman,” the Arizona Republican wrote in his memoir, “Faith of My Fathers.”

Roberta met her future husband, John S. McCain Jr., as a 19-year-old student at the University of Southern California. McCain Jr., known as Jack, was a young Navy ensign serving on the battleship USS Oklahoma, whose home port at the time was in Long Beach, California. Another ensign, who’d taken Roberta out a few times before, brought her onto the Oklahoma for a visit when she crossed paths with Jack.

Roberta and Jack fell in love, but Roberta’s mother was so unhappy that her daughter could end up with a sailor that she banished Jack from her family home, Sen. McCain wrote. That did not deter Roberta. Instead, she and Jack eloped one weekend in Tijuana, Mexico, in 1933. The following Monday, she went back to USC to finish her exams.

Travel was a given for the wife of a naval officer, and Roberta and her children moved repeatedly, “always in the middle of a school term,” she said in a 2008 C-SPAN interview. (A roving childhood would come to define Sen. McCain’s first run for Congress in the early 1980s. When accused of setting down artificial roots in Arizona during a candidate forum, McCain shot back by saying that the place he had lived the longest in his life was Hanoi.)

To round out her children’s irregular schooling, Roberta planned road trips to educational destinations. In his memoir, McCain wrote that the attractions included art galleries, museums, buildings designed by famous architects, natural wonders and the homes of famous figures. He had particularly fond memories of the Grand Canyon; Carlsbad Caverns; Natchez, Mississippi; and Mount Vernon in Virginia, to name a few.

On one of those trips, Roberta drove her family to Juarez, Mexico, so she could show her children a cathedral that her own father had taken her to when she was young. The trip did not go as planned. The family got lost and wandered into a rough part of town, at which point Roberta “sensibly called off the search and beat a hasty retreat for the border,” McCain wrote.

In 1967, the McCains were in London when they received a call that their son’s plane had been shot down over Vietnam. Roberta believed Johnny was dead.

Instead, he’d ejected and been captured by the North Vietnamese.

“Can you believe that’s the best news I ever heard in my life?” Roberta told C-SPAN.

The next 5½ years were agonizing for his parents and brutal for McCain, who was imprisoned, bayoneted, beaten and tortured by the Vietnamese. When McCain was finally released in 1973, he was broken, but alive.

For all her doting on her children and husband, Roberta took the reins of her own life too. In 2007, she described to The New York Times how she and her sister would drive through the world’s open roads, always with Roberta riding shotgun as the navigator.

Roberta’s simple request was that her hotel rooms have hot water and light. When her husband was stationed abroad, Roberta would travel ahead to meet his ship in Genoa or Barcelona. Often, she and Rowena, who died in 2011, would settle into their latest destination and pick up a gin rummy game that had gone on literally for decades.

Once, when traveling through France in her 90s, Roberta was told she was too old to rent a car. So instead, she bought one. Afterward she shipped the car to the East Coast, where she picked it up and drove to San Francisco, she told the Times.

In his memoir, McCain wrote that he “became my mother’s son,” often by “emulating and exaggerating” her characteristics. For example, she was exuberant, so he was rowdy.

“She taught me to find so much pleasure in life that misfortune could not rob me of the joy of living,” he wrote.

It was that bond that followed Roberta on the campaign trail for McCain. During her 2008 C-SPAN interview, talk turned to why Roberta felt her son should be elected president. Roberta was then 95; her son, 71.

McCain had been criticized for being too old for the Oval Office, the reporter noted. But he always responded by pointing to his mother’s longevity.

“Well, of course,” Roberta said with a shrug and smile. “He’s glad to put me up as what he hopes his life span will be.”

On Friday, Roberta McCain was sitting in a wheelchair as they carried her son’s casket into the Capitol Rotunda. She held granddaughter Meghan McCain’s hand and lifted a handkerchief to dab her eyes.

Wearing lipstick, pink blush and a polka dot white blouse, she sat silently as congressional leaders and Vice President Mike Pence lauded her son. When the tributes were over, Roberta was the last member of the family to touch his flag-draped casket. She crossed herself afterward.

Rowan County Board of Commissioners to meet Tuesday