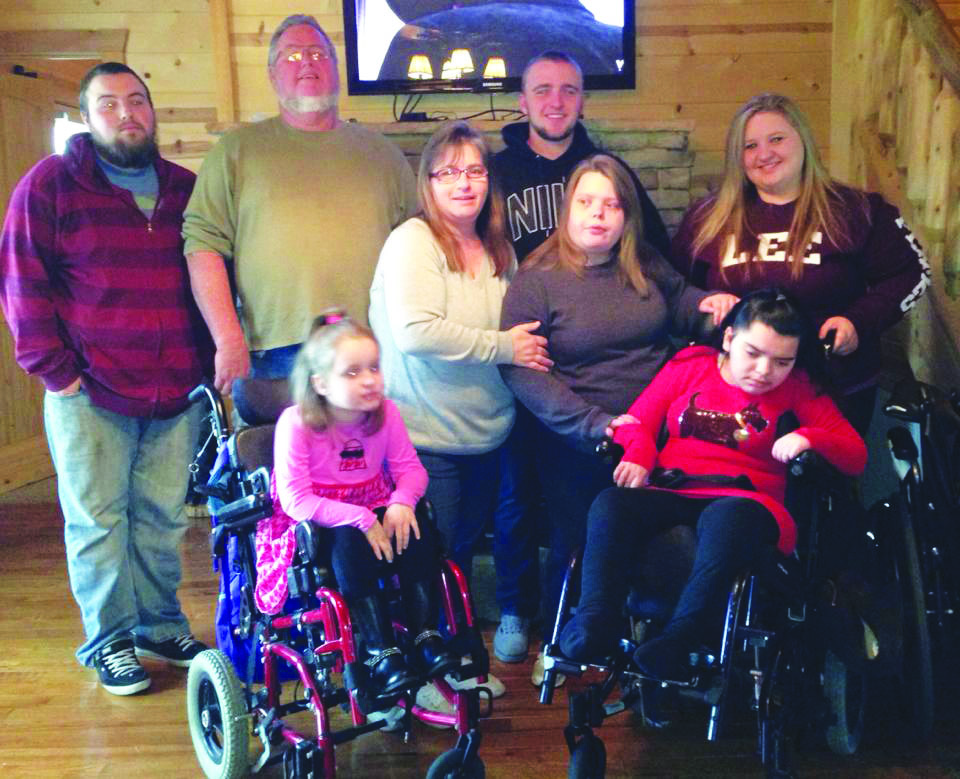 The entire Threadgill family poses together for what turned out to be the last time. In wheelchairs are Brooke and Delaina. In the middle are mom Nancy and oldest daughter Jessica, who died of natural causes earlier this year. Others, left to right, are Josh, dad Ken, Caleb and Sarah. Josh died of an overdose in 2014.

Nancy Threadgill prays that a rally taking place this coming weekend in Kannapolis will offer other families something hers was not able to find in time: Hope Over Heroin.

That’s the name of an event, but it’s also what’s missing in the lives of thousands who watch loved ones spiral out of control, pulled down by a drug they cannot escape.

Heroin. You may have read about the epidemic of opioid addiction that has swept the country. Nancy and Ken Threadgill have lived it. Their 24-year-old son, Josh, died of a heroin overdose on Nov. 22, 2014. And they don’t want the drug to rob any other families of a loved one.

Growing up, Josh was very quiet and smart, Nancy says, and “a very funny kid.” She home-schooled their children and saw that, even as a teen, Josh loved learning and loved people.

Things started to turn around age 17, as Josh was finishing school. He started smoking pot with friends, Nancy says. “We got into conversations. … I wasn’t very happy about it.”

Josh soon knew he was in trouble. He couldn’t stay away from the drug.

He went through detox and rehab repeatedly. He said he wanted to become a counselor and help other addicts recover.

“It was his heart’s desire,” Nancy says. “But he had no control.”

The experience was frustrating and hurtful, she says. Josh made promises. “I’m done, I’m done.”

He must have detoxed a dozen times, she says, until finally last year they thought he had broken free. He went through a rehab program in Winston-Salem in October and came home. The next month, he went on a 10-day vacation with the family. But he was not completely at ease.

“I could tell he was missing something,” Nancy said. They came home.

“He tried heroin one more time — and it took him.”

They believe Josh used the same amount as he had been using before rehab, but this time it killed him.

“He just was in a mental state of sadness and depression. He just couldn’t fight it any more.”

They were devastated. “I thought our love for him was enough. But it didn’t keep him here. We feel cheated.”

The Threadgills had five other children. The oldest, 31-year-old daughter Jessica, died this past spring of a seizure, and two younger daughters the couple adopted have a similar condition, Rett Syndrome.

The other children, Caleb and Sarah, now 21 and 23, took Josh’s death hard. “They grieved deeper because they didn’t have time to fix things,” Nancy says. “They needed to have another conversation and let him know how much they loved him.”

Nancy says the family kept Josh’s struggle to themselves for a long time.

“It didn’t represent what we wanted our family to be. We thought, ‘We’ll handle this internally.’”

They were never ashamed of Josh, but heroin was not who he was.

“We miss him terribly. We miss the future we were supposed to have.”

Nancy wants to take what she’s learned about addiction and try to help other families. She and Ken have been active in helping to plan the Hope Over Heroin rally that will be held for Rowan and Cabarrus counties this Friday and Saturday in Village Park. The event starts with a memorial march at 6 p.m. Friday and will include live music and testimonials both nights.

Most important, there will be a 32-tent City of Resources, representing agencies and services available to help families struggling with heroin, including detox and rehab — and they’re not just there for show and tell.

“We know who has beds available that night,”  Nancy says. “Something will be available for anyone in need.”

The free event was initiated by their pastor at River of Life Church, but people of all faiths — or no faith — are welcome. “We’ll be feeding thousands,” Nancy says. And there’s no charge for any of it.

They expect to see people from all walks of life — people struggling with heroin, whether it’s their own addiction or someone else’s, as well as grieving families looking for answers.

“It’s a very unusual event,” Nancy says, “an event that’s going to start some healing — and, gosh, we need it.”

For more information, go to hopeoverheroin.com/rowan-cabarrus/