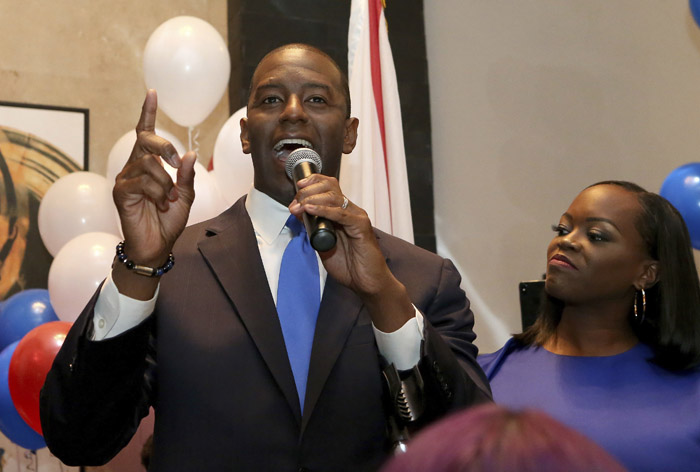 Last Tuesday’s primary results offered some surprises, some clarity and some good results for the president.

In Florida, voters will head to the polls in November and choose between the Bernie Sanders candidate — Tallahassee Mayor Andrew Gillum — and the Trump candidate — Rep. Ron DeSantis. The differences between Gillum and DeSantis are revealing in that each candidate represents the current emotional and ideological wings of their respective parties.

Gillum is a progressive, left-wing mayor who has adopted all the fashionable liberal positions, including abolishing Immigration and Customs Enforcement and adopting Medicare for All. His campaign was backed enthusiastically by leftist billionaires George Soros and Tom Steyer.

DeSantis is an experienced and popular congressman who attended both Yale University and Harvard Law School, earned the rank of lieutenant commander as a Navy JAG officer and received an enthusiastic endorsement from President Trump.

The left has everything they’ve been clamoring for with Gillum in a state they would have you believe is destined to be a part of the Blue Wave. But any statewide race in Florida requires going big, and I hope Soros and Steyer pour their riches into this race rather than spend them elsewhere.

Florida is a must-win for the Republicans in 2020, and by nominating Gillum it looks like the Democrats just made it easier for Trump to keep that state in his column two years from now.

Mercifully, it looks like the Sheriff Joe Show has finally come to a close as the former sheriff finished a distant third. And Ward, a serial candidate and delusional John-McCain-hater, could not get even a third of the vote.

Republicans have a sensible, appealing and eminently credentialed candidate for Senate in McSally — exactly what we need to fill the void created by Sen. Jeff Flake’s retirement.

As is the case in Florida, the contrast for voters in Arizona could not be more stark. This vivid dichotomy was made plain in a McSally campaign advertisement highlighting McSally standing in combat gear in front of a fighter jet side-by-side with the Democratic nominee, Rep. Kyrsten Sinema, wearing a tutu at a protest.

So, Arizona and Florida offered a double dose of good news for Republicans. All this happened as consumer confidence reached an 18-year high, NBC/Wall Street Journal polling showed Trump’s approval as “remarkably stable,” and the latest gross domestic product report revised second-quarter economic growth up to 4.2 percent, the best in four years.

With numbers like that, I guess you can tweet like a madman, insult an American icon, and pull the rug out from underneath members of your own Cabinet and still manage to stay in the game politically.

Thankfully, even as Trump blunders, the economy and the hapless Democrats are making life easier for Republicans.