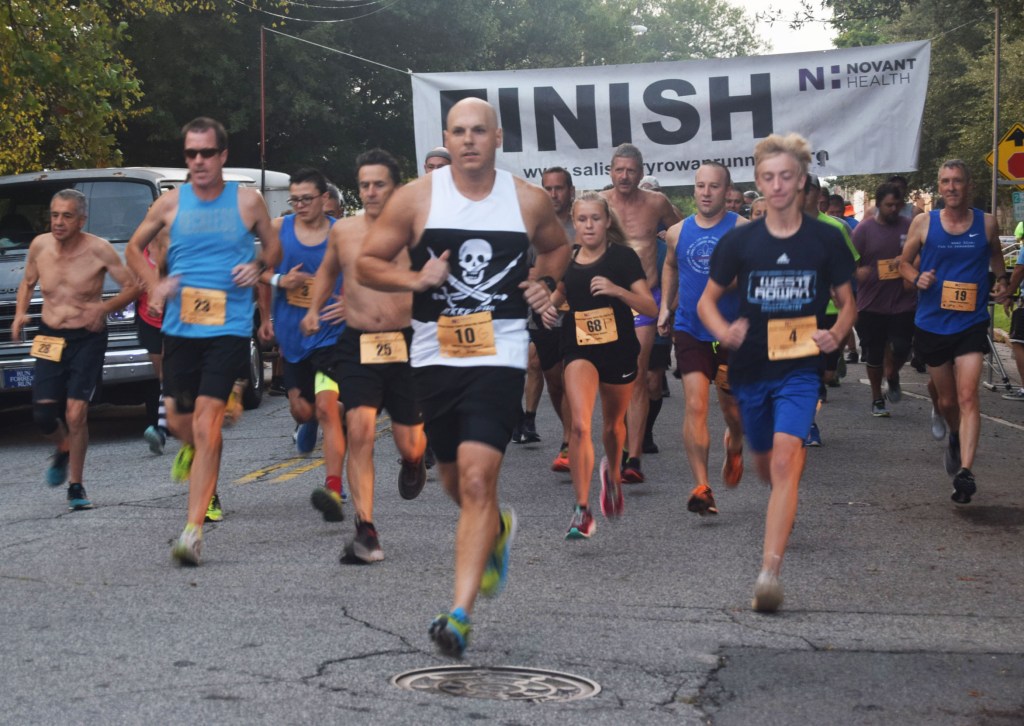 SALISBURY — It’s still dark as people start making their way towards the front of the Rowan Public Library; even the birds are still asleep — but the runners are awake.

“There’s nothing like getting up at the crack of dawn to run a race,” said Bill Burgin, board chair of the Rowan County United Way.

Saturday’s “Sunrise 5k” put a newer twist on an old Salisbury tradition. According to David Freeze, organizer and local athlete, a race to benefit the United Way is held in Salisbury just before Labor Day. Though, traditionally, it hasn’t been at dawn.

But after a few years of bad weather and hasty rescheduling, organizers decided to move the event to the early morning in hopes of avoiding evening thunderstorms. In doing so, the race set itself apart.

“It’s unique to Rowan County to have (a race) this early,” Freeze said.

The start of the 5K was timed to roughly coincide with sunrise and just a few minutes after 7 a.m. the runners took off.

Among them was David Gullet, 80.

Gullet said he started running just this year, after his wife passed away in January. His daughter and son-in-law both run, and invited him to join them. It’s just nine months into the year, but Saturday was Gullet’s 11th event. Gullet alternates between walking and running, but said he likes the camaraderie of races.

“I enjoy it and it gives me something to do,” he said.

Also running was Mary Burridge — and her 16-month-old, Gunner. Burridge said she planned to run the whole way pushing Gunner in his stroller. Also joining her was 7-year-old daughter, Greenleigh.

Burrage, too, is new to running.

“I just started,” she confessed.

She signed up for a weight loss and wellness class in January, and has pushed through running. This is her fourth event.

“I don’t necessarily race to win, I race to finish,” she said with a laugh.

According to Burgin, that’s the spirit of local runs.

“It’s more about the community to have fun together,” he said.

But Saturday’s 5K also had an important goal — to raise money for the United Way’s annual campaign. The campaign won’t officially kick off until later in September, but Burgin and campaign chair John Struzick said they wanted to keep the fundraiser, and the United Way, in people’s minds.

“We’re all in for the United Way,” Struzick said.

Struzick and his employer, Innospec, sponsored the race.

This year the United Way has a $1.6 million campaign goal — higher than last year’s.

“We’ve got a pretty good goal,” he said.

It’s an important one, too. The Rowan County United Way and its member agencies serve more than 70,000 county residents — roughly half the population.