A statement in the yard 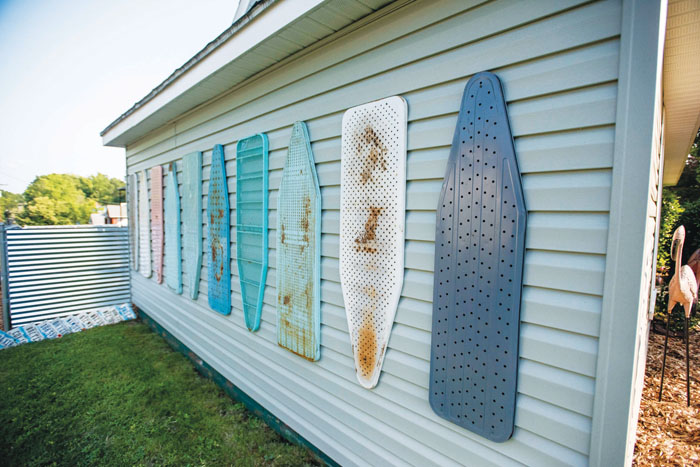 Jeffery Motes and his wife Noelle Loebe home is a head turner for motorists slowing down for the intersection of West Henderson St and Fulton. The garage boasts a series of colored ironing boards. JON C. LAKEY / SALISBURY POST

By Maggie Blackwell
If you know Jeff Motes and Noelle Loebe, you’re not at all surprised that she asked him, “What if we hang ten ironing boards on the side of the house?” 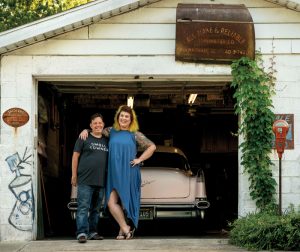 Noelle says of her husband,”We have similar tastes. We both like a retro flavor to things.”
JON C. LAKEY / SALISBURY POST

The married couple has lived on the corner of N. Fulton and Henderson for 12 years, and over time they’ve garnered quite a collection of unusual art, both inside and outside the home.
Most noticeably, perhaps, is the galvanized fence surrounding their back yard. “I always call the city before I start something outside,” Jeff says. “Basically their only requirement was that I not encroach the sidewalk.”
So he installed a chain link fence and faced it with corrugated metal. It caused lots of questions — from his neighborhood all the way to City Hall — but he had checked beforehand, and all was legal.
“It helps the dogs not to see every car and pedestrian that go by,” he says.
Loebe was working in Wisconsin at the time and had no idea he was building a fence. It was a happy surprise, she says. “We have similar tastes. We both like a retro flavor to things. I think Jeff wanted the garage graffiti. The license plates were my idea, and the ironing boards.”
Motes is a nurse by profession, but he proudly wields a torch when he has to. He’s from West Virginia and says he was raised to learn as many skills as he could. Many of his welding projects adorn the home, from the fence to the 1960s Coke sign that serves as an awning to his workshop, to the roofs for his carport and patio.
Another metal project of Motes’ is the border to the herb garden, made from Iowa license plates. It was Loebe’s idea, and she wanted a particular sawtooth effect across the top. So he found 400 license plates on Ebay, —“Got a great deal!”— and bolted them all together so as to achieve that sawtooth effect.
Not all the art is metal-based. Years ago the couple contracted an artist from Spencer to paint graffiti on their garage. The design reflects Motes, Loebe and one of their dogs. Loebe, who is also a nurse, was formerly a cake decorator. Motes’ nickname was “Cookie” in high school. Their dog was named Olive, and voila! Graffiti on their garage with Olive cupcake cookies.
“The reaction was immediate,” Loebe says. “People stopped by to ask, look or complain. Someone stopped by just yesterday wanting similar art for a banner for their wedding.”
Hanging above the garage door is a car door with a light. The door is from a 1950s era Goliath, a car manufactured in Germany. There’s painting on the door advertising a typewriter repair company along with a five-digit phone number.
The most recent addition is a large red Tiki guy who guards the front yard. They plan to plant around him next spring. He shares the yard with a flock of pink flamingos, gifted to the Motes-Loebe’s by a friend who retired to Chapel Hill. Many of the flamingos are vintage from the 70s, not reproductions. 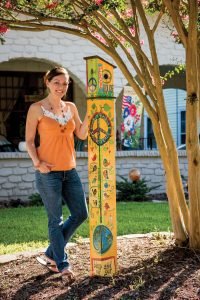 Amy Donaghy stands next to her Peace Pole that includes a built-in birdhouse located in the front yard of her home on Wiley Ave.
JON C. LAKEY / SALISBURY POST

Across town lives Amy Donaghy (DON-a-hee), who moved into her 1927 Spanish-style bungalow just a few months ago. Donaghy grew up in Asheville and recently lived in Charlotte. She moved to Salisbury because it afforded her the opportunity to buy the vintage house she wanted for a reasonable price.
Donaghy has already made a statement in her yard with the installation of a peace pole by Seattle artist Stephanie Burgess. “Her work really stands for — it’s very Asheville. When someone sees that piece, they know the person who lives here is friendly and peaceful. It’s a birdhouse, and who can be sad when the birds are singing?”
Donaghy, the self-proclaimed “queen of Craigslist,” saw the peace pole online and, having had several Burgess pieces before, recognized it.
She met with the owner and started the bargaining process. The two women talked and realized they were in similar phases of life. The other woman surprised Donaghy by saying, “You know what? I believe in karma. You can just have it.”
When Donaghy moved in she tried to install the piece in the ground herself. Three times in the ensuing weeks it fell over. Finally her next-door neighbor knocked on the door if he and his son could install it for her. Now it’s in for good.
Also hiding in her yard is a collection of Tom Clark gnomes from her mom’s collection. “See that lemon rind used for a wheel? Who can not love that?”
Right now she is planning her yard. Because of the Spanish flavor of the house, “Part of me wants to do banana trees, bouganvilla and tropical irises. But the southern girl in me wants hydrangeas, sweet potato vine, lantana and gardenias!” — and she looks forward to collecting more art to complement her yard.