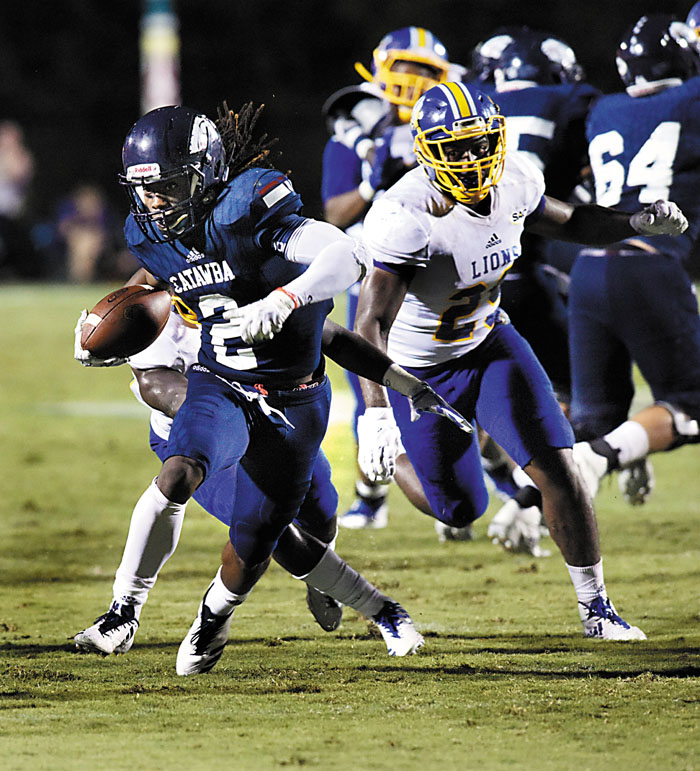 Catawba was humbled by 19th-ranked West Georgia, 34-3, on Saturday afternoon at University Stadium to open the football season. It was more competitive than than it sounds —  7-3 with a minute left in the third quarter— but that wasn’t much consolation for the disappointed Indians.

“I never would have dreamed we’d lose by 30,” Walker said. “But I’m not worried. We’ll regroup and we’ll be OK. Three years ago we lost to West Georgia, 44-13, to start the season and we still made the playoffs.”

Catawba had a dismal outing in the passing game.  QBs Reid Carlton and Ken Avent III were a combined 13-for-40 for 109 yards, with three sacks and two interceptions. The Indians managed only 86 rushing yards. They lost the turnover battle, 3-1, and were awful on third-down conversions, moving the chains just twice in 17 tries.

Defensively, Catawba played really well for three quarters before finally wilting on a steamy day. Most of the West Georgia points came from capitalizing on short fields.

“You never expect your defense to be on the field for 17 series,” Walker said. “We had the ball 18 times. We needed to do a lot more with 18 chances than three points.”

Catawba had plenty of possibilities in the first quarter to make it a different game.

Catawba’s defense got a stop to start after the kickoff, and the Indians had the first scoring opportunity with first-and-goal at the West Georgia 5 after a Carlton pass completion. But a first-down run was stacked up at the 4, and a disastrous run for a loss of 7 and a penalty pushed the Indians back. Lee Brackman’s 33-yard field goal gave Catawba a 3-0 lead and its only points of the afternoon.

The Indians should have added to their lead after lineman Cameron Davis intercepted a pass and lugged it to the West Georgia 26, but Carlton was intercepted. That was the turning point.

Catawba’s defense shut out penalty-plagued West Georgia until the 6:47 mark in the second quarter, but a 21-yard punt combined with an unsportsmanlike conduct flag gave the Wolves a short field to work with at the Catawba 30. Quarterback Willie Candler hit Malik Henry for an 18-yard touchdown and a 7-3 lead that would stand up for a long time.

Catawba made a quarterback switch after Carlton was sacked and lost a fumble in the third quarter, and Avent experienced initial success by handing off to Demonte Good, who spearheaded a drive that stalled at the West Georgia 21. Brackman missed on a 38-yard field goal try.

Then the Wolves drove 79 yards, a six-minute march, to take control. They converted on a fourth-and-3 at the Catawba 24 and finally made it 13-3 on an 8-yard run by Devontae Jackson with 20 seconds left in the third quarter.

Catawba collapsed after that. Avent threw an interception that led to a quick touchdown for a 20-3 disadvantage.

With Catawba backed up to its 5, Caleb Berry launched a 57-yard punt, but the Indians couldn’t cover it. K.J. Parmer returned it all the way, and it was 27-3. That made it three West Georgia touchdowns in five minutes.

West Georgia tacked on another touchdown in the final minute.

“The effort was there, but not the execution,” Walker said.  “Our defense was good for three quarters, but we’ve got to play 60 minutes.”

West Georgia totaled 362 yards, while Catawba had 195. First downs were even at 16, but Catawba got five on West Georgia penalties.

Kenyatta Greene had 52 rushing yards, 42 after halftime. Good managed 43 yards, with 31 coming on that one third-quarter drive. Tight end Jourdan Osinskie had four catches for 49 yards.

Linebacker L.J. Melvin made 10 tackles to lead Catawba’s defense. Ryan Watts had the only sack of Candler. Trey Murray (2) and Cris Page had breakups.

“We had our brights spots,” Walker said. “But we’ve got a lot work to do.”

NOTES: Eric Gibson (North Rowan) started at linebacker and made four stops, one for loss. DB Brenden Westbrook (Carson) and DL Steven Thurston (North), redshirt freshmen, made their college debuts for the Indians. Westbrook came close to blocking two punts. DL Joshua Moses (East Rowan) has  come back from last year’s season-ending injury and was credited with one tackle. … Catawba plays Winston-Salem State at Bowman-Gray Stadium next Saturday at 6 p.m. The game will be televised by WAXN Channel 64 in Charlotte and broadcast by WSAT 1280 radio.