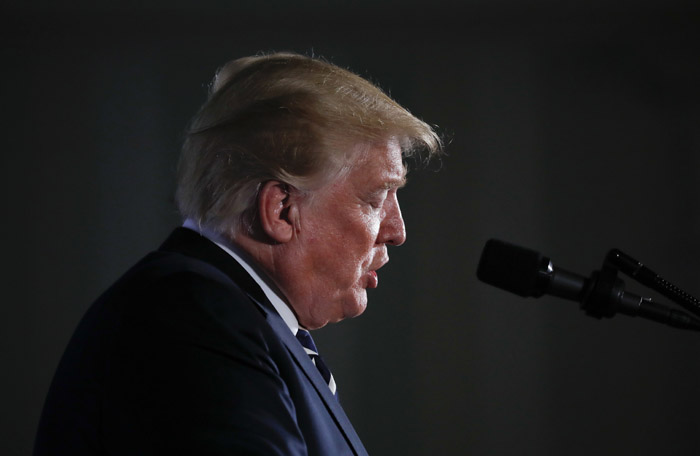 President Donald Trump speaking at a Republican fundraiser at the Carmel Country Club in in Charlotte on Friday. Pablo Martinez Monsivais/Associated Press

A small but significant line was crossed recently when The Washington Post’s fact-checker, Glenn Kessler, called President Donald Trump a liar for the first time.

He’s cited the president for about 4,300 “false or misleading claims” since the inauguration, but as Kessler notes, “In many of those cases, it’s not possible to tell whether Trump was intentionally fibbing or simply careless or wrong.”

That all changed, writes Kessler, when Trump Michael Cohen pled guilty in federal court and provided “indisputable evidence that Trump lied” about his role in silencing two former girlfriends during the 2016 campaign.

“There’s no question Trump lied — repeatedly, intentionally, over more than a year, enlisting top aides and advisers to further the deception,” concluded the fact-checker.

Some ardent anti-Trumpers will tell Kessler, “What took you so long?” After all, as presidential historian Douglas Brinkley told the Toronto Star, “We’ve had presidents that have lied or misled the country, but we’ve never had a serial liar before. And that’s what we’re dealing with here.”

Even Trump’s own lawyers admit Brinkley’s right, since they openly fear that if he talks to Special Counsel Robert Mueller, he’ll lie under oath and commit perjury. Moreover, many respected news outlets started using the L-word about Trump a long time ago.

But Kessler is so careful and cautious that his shift marks another milestone in the increasingly determined and aggressive effort by the mainstream media to push back against the president and hold him accountable for his serial trashing of the truth.

As Marty Baron, Kessler’s boss as editor of the Post, put it, “I think the public is looking for a press that stands for something, that stands for telling the truth, and will do it regardless of the pressures, and the people will support that.”

That’s an essential mission, but a very difficult one in the Age of Trump — whose own lawyer, Rudy Giuliani, recently proclaimed on NBC’s “Meet the Press” that “Truth isn’t truth.”

Trump’s incessant attacks on the media as the “enemy of the people” are deliberately designed to undercut the ability of fact-checkers like Kessler to correct and counter the president. And those attacks work. Gallup reports that 62 percent of Americans think the news they get is “biased.”

CBS correspondent Lesley Stahl recalls asking Trump why he assails the press so vociferously: “And he said, ‘You want to know why I do it? I do it to discredit you all and demean you all so that when you write negative stories about me, no one will believe you.’”

Trump doesn’t just demean and discredit the mainstream press; he also simply goes around it, broadcasting his own bombastic broadsides — at any hour, with no filter — on what can only be called TBN, the Trump Broadcasting Network. He boasts at having more than 100 million followers on various social media platforms.

Even if that’s an exaggeration, he was correct when he told Stahl right after the election that social media gives him “a tremendous forum. … I have a method of fighting back.”

What makes Trump even more dangerous is that he’s a very good liar. He never corrects himself, never apologizes, and keeps repeating the same fabrications over and over again.

Scientists who study human cognition know Trump is on to something. Writing in Politico, Maria Konnikova summarizes the research in the field: “When we are in an environment headed by someone who lies so often, something frightening happens: We stop reacting to the liar as a liar. His lying becomes normalized. We might even become likely to lie ourselves.”

Wait, it gets worse. “Here’s the really bad news for all those fact-checkers and publications hoping to counter Trump’s false claims,” she writes. “Repetition of any kind, even to refute the statement in question … perversely reinforces the very claim it means to debunk.”

So should folks like Kessler and Baron give up? Should they abandon their mission of telling the truth? Absolutely not. They have to be fair to Trump, and meticulously accurate. The L-word should never be used carelessly, but only when there’s “indisputable evidence” that the president is deliberately deceiving people.

But Giuliani is wrong. Truth is truth. Facts are facts. Lies are lies. And the public needs and deserves journalists who will help them understand that.