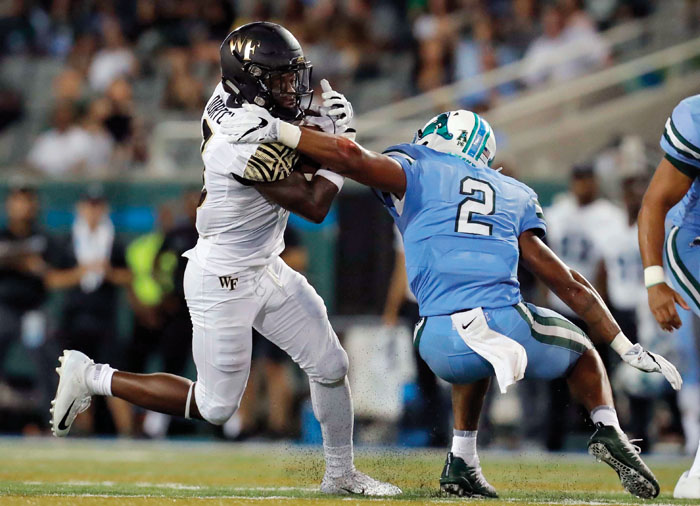 By BRETT MARTEL, AP Sports Writer
NEW ORLEANS (AP) — Wake Forest true freshman quarterback Sam Hartman wasn’t entirely immune to the type of blunders that plague young players and drive coaches crazy.
Still, he was prolific enough to get away with it in what was roundly reviewed as a promising collegiate debut.
Hartman passed for 378 yards and two touchdowns, Cade Carney powered in for a short TD in overtime, and the Demon Deacons escaped their season-opening visit to Tulane with a 23-17 victory Thursday night.
“Sam was so poised,” Carney said. “He made some rookie mistakes, like you do, but the way he played overall — super proud of him.
“They were going to dare him to throw the ball, and he threw some dimes.”
Hartman’s yardage total ranked 10th in program history for a single game and was the most in a maiden start by any Wake Forest quarterback of any age.
Jonathan Banks connected with Terren Encalade for touchdown passes of 52 and 74 yards for Tulane, which had the ball on the edge of game-winning field goal range in the last minute of regulation before stalling after a false-start penalty.
Tulane’s Peter Woullard was flagged for a personal foul when the Green Wave began overtime with the ball. Tulane turned the ball over on downs soon after.
“This one stings, no doubt about it. But it’s the first of a 12-game season,” third-year Tulane coach Willie Fritz said. “We had some momentum going in the second half, but we shot ourselves in the foot with a couple of penalties.”
Alex Bachman caught both of Hartman’s touchdown passes, which went for 10 and 19 yards. Freshman receiver Sage Surrratt had 11 catches for 150 yards. Greg Dortch caught 12 passes for 149 yards.
“This was going to be a hard game. I knew it,” Wake Forest coach Dave Clawson said. “You’re going on the road, starting a freshman quarterback. You almost anticipate they’ll probably make a play or two. … I didn’t know if we would be able to overcome it. We almost didn’t.
“That was guts and effort and heart, and our players, just when they looked dead in the water, man, we found ways.”
FRESHMAN FOIBLES
Hartman was starting the opener because projected starter Kendall Hinton was suspended three games for an unspecified violation of team rules.
Hartman finished 31 of 51 and his 20 misses included two interceptions, the second of which could have cost Wake Forest the game.
The Demon Deacons were threatening to take a two-score lead in the fourth quarter when Hartman attempted an underhanded flip in an effort to avoid being sacked by Tulane’s Tirise Barge on second down at Tulane’s 19. The ball went straight into linebacker Larry Graham’s arms.
Clawson said he told Hartman, “Don’t ever, ever do that again.
“It was just an unnecessary — really, not a smart play,” Clawson continued. “Really, a foolish, foolish play. But we’ve got to coach that out of him.”
Clawson generally does not let freshman speak with reporters and maintained that policy.
UPSET BID
Banks scrambled twice for first downs during the game-tying drive in the fourth quarter, once up the middle for 17 yards on third-and-5 and later scrambling 15 yards on fourth-and-11 from the Wake Forest 37.
That set up Merek Glover’s career-long 39-yard field goal to tie it at 17 with 3:53 left.
Banks finished 18 of 37 for 281 yards, but constantly found himself spinning and scrambling away from pressure. He was sacked three times and often had to throw the ball away. Even his first TD pass to Encalade came after he was forced to scramble to his right.
“I feel like I can make plays outside the pocket, just keeping my eyes downfield,” Banks said. “Sometimes I got out of there a little early due to pressure.”
MISSED OPPORTUNITIES
The Green Wave repeatedly squandered good field position. Tulane punted seven times from Wake Forest territory.
But Tulane also never ran a play from inside the Wake Forest 22.
THE TAKEAWAY
Wake Forest: The Demon Deacons saw that Hartman can play well with protection. Now they just have to work on his composure when his blocking breaks down.
Tulane: The Green Wave can be encouraged by its ability to compete in the American Athletic Conference and vie for a bowl bid after taking a power-conference team to overtime in its opener.
UP NEXT
Wake Forest: Hosts Towson of the second-tier FCS in its home opener on Sept. 8.
Tulane: Hosts FCS program Nicholls State on Sept. 8.
___
More AP college football: https://apnews.com/tag/Collegefootball and https://twitter.com/AP_Top25