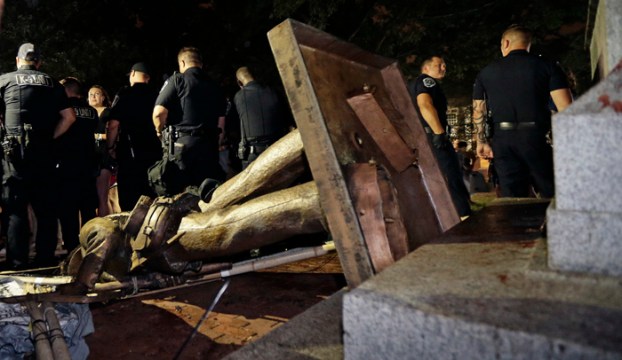 Police stand guard after the Confederate statue known as Silent Sam was toppled by protesters on campus at the University of North Carolina at Chapel Hill. Gerry Broome/Associated Press file photo

RALEIGH — The chancellor of the University of North Carolina at Chapel Hill strongly indicated Friday that the school won’t return a torn-down Confederate statue to the main quad where it used to stand, but she stopped short of confirming its former spot has been ruled out.

In a campus-wide statement, Chancellor Carol Folt said she is working with the school’s trustees to find an “alternative location” for the statue that was torn down during a protest on Aug. 20.

“Silent Sam has a place in our history and on our campus where its history can be taught, but not at the front door of a safe, welcoming, proudly public research university,” she said.

McCorkle Place, where it stood, is often called the university’s “front door.”

Still, during a conference call with reporters Friday, Folt wouldn’t confirm the quad has been ruled out.

Folt is working with trustees to develop a plan for the statue by a Nov. 15 deadline, when it will be submitted for approval to the Board of Governors that oversees the statewide university system.

Folt said Friday that she and the Chapel Hill trustees will take recommendations in the coming weeks from students, faculty, alumni and others.

Silent Sam had stood in McCorkle since 1913 until it was torn down during a gathering of several hundred demonstrators, who called it a racist symbol. Protesters used banners to conceal efforts to tie the rope they used to bring it down. Four protesters face misdemeanor charges of helping topple the statue.

Tensions remain high more than a week after the bronze statue was taken down. About a dozen people have been arrested in follow-up demonstrations and counter-protests since the statue’s toppling, including three on Thursday night.

KANNAPOLIS — Salaries for Kannapolis city employees have been found wanting, according to a preliminary study by city human resource... read more