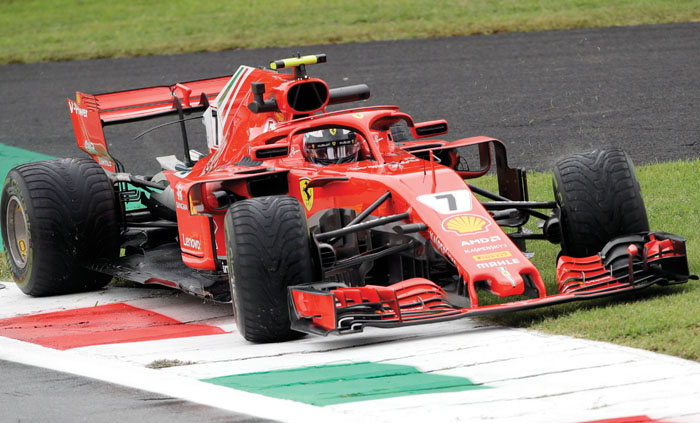 Ferrari driver Kimi Raikkonen of Finland takes a tour on the grass during practice at the Monza racetrack, in Monza, Italy , Friday, Aug. 31, 2018. The Formula one race will be held on Sunday. (AP Photo/Luca Bruno)

By DANIELLA MATAR, Associated Press
MONZA, Italy (AP) — Texas Motor Speedway President Eddie Gossage lambasted Formula One bosses for their “infamous indifference” toward fans after the draft calendar for 2019 was revealed on Friday.
The schedule would flip the traditional autumn pairing of the races in Austin and Mexico City, putting the Mexican Grand Prix first for the first time.
Pushing the U.S. Grand Prix back a week to Nov. 3 would conflict with NASCAR’s playoff race on the same day at Texas Motor Speedway, about a three-hour drive north of the Circuit of the Americas. A similar scenario happened in 2014.
“Shame on Formula One for doing this to the fans,” Gossage said.
“Fans have recognized this as the NASCAR date on this weekend since its inception long before Circuit of the Americas was built.
“I would think a lot of fans — myself included — would enjoy going to both races. Now Formula One is making fans choose only one. Yet another bad call by Formula One showing their infamous indifference toward the fans.”
Circuit of the Americas President Bobby Epstein did not immediately respond to a request for comment.
Mexico City race organizers’ are also likely to be unhappy as the Mexican GP would be on Oct. 27, several days ahead of the national Dia de los Muertos holiday celebrations, despite their desire to link the two events.
The 21-race draft calendar is subject to approval by the FIA World Motor Sport Council when it meets on Oct. 12.
The order of races is otherwise very similar apart from the Chinese GP effectively swapping places with Bahrain and becoming the third destination on the circuit rather than the second. The race in Shanghai will be the 1,000th grand prix since F1’s inception in 1950.
The season will begin with the Australian GP in Melbourne on March 17. Brazil (Nov. 17) and Abu Dhabi (Dec. 1) will be the last two races.
The calendar also includes races in Germany and Japan.
The German GP was scrapped in 2017 but was reintroduced this year.
F1 also renewed its agreement with the promoter of the Japanese GP for a further three years, until 2021.
___
More AP auto racing: https://apnews.com/tag/apf-AutoRacing and https://twitter.com/AP_Sports
___
AP Sports Writer Jim Vertuno contributed from Austin, Texas.