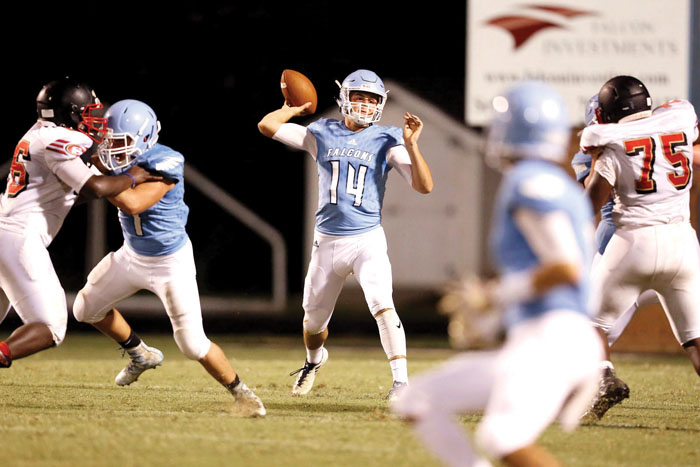 MOUNT ULLA — The next pass senior Payne Stolsworth tosses for West Rowan will be his 500th, and there’s no substitute for experience.

Stolsworth became West’s starting quarterback the third game of his sophomore season. When he led the Falcons’ dramatic rally against North Rowan for a 20-14 victory on Friday, he was making his 26th start.

“That’s why he can stay even-keel in pressure situations,” West head coach Joe Nixon said. “He’s been in a lot of big games and he’s prepared himself to play well in those games.”

Stolsworth has thrown for 4,540 yards, which ranks eighth on the county’s all-time list. He should pass North’s Carvie Kepley (4,582) for seventh when the Falcons return to action against Davie County after their open week.

You don’t put up the sort of numbers that Stolsworth has without exceptional receivers. He had Kortez Weeks (Elon) his sophomore year and now he has Jalen Houston.

Houston, a junior who already has 68 catches for 1,382 yards and 16 touchdowns, is well on his way to one of the great receiving careers in school and county history.

“In middle school, Jalen was a running back and he was fast enough to just run by everybody,” Nixon said. “He’s worked hard at becoming a good receiver. He learned a lot about work ethic from his older brother (Juwan, who plays at Guilford) and from Korty Weeks. He’s become a precise route runner. He’s not just a speed guy.”

Even with Houston and Stolsworth, West’s season started shakily. Stolsworth suffered a shoulder injury in a 21-7 loss to Mooresville, and Houston was shut out for the first time since he was a freshman.

“It just wasn’t a very good night for Payne or me,” Houston said. “Mooresville did a good job of sticking with me.”

But Week 2 at North Rowan brought vastly different results: Stolsworth was 12-for-19 for 239 yards passing and added key scrambles. Houston produced a long punt return and his five receptions accounted for 151 yards.

“The most important thing was forgetting about Mooresville, just moving past it,” Stolsworth said. “We also ran the ball better against North than we did against Moorsaville, and that helped open up our passing game. That was the plan — run the ball first — and we stuck to it.”

North led late in the third quarter, 14-7, and 0-2 was looking like a real possibility for the Falcons. But that’s when Stolsworth and Houston connected. It was like old times — 68 yards, touchdown, 14-all.

Nixon said the Falcons were “dying for a big play.” They got it.

A play-action fake attracted the attention of the North safety in the middle of the field.  Houston got a clean release off the line of scrimmage and suddenly was running free on a deep post route. Stolsworth delivered a strike.

“That was the crucial play because we were down and we really needed something to happen,” Houston said. “As soon as I lined up, I could see we had a chance for a good play.”

Houston almost had a second TD,  hauling in a 60-yard completion.

“Jalen kind of got tangled up with (safety Jaharion) Graham on that one, and Xzavier Davis was able to take a good angle and make the tackle,” Nixon said. “He kept him out of the end zone.”

It was still 14-all when West got the ball for the drive that proved decisive.

“We were on our 40, and when I looked up at the clock, there was 3:08 left,” Stolsworth said. “That’s plenty of time, but not enough time to pound the ball every play. I knew we’d need to hit some passes.”

Stolsworth isn’t known  for his wheels — he has minus career rushing yards — but he scrambled out of the pocket for a huge first down near the North 20. Flushed from the pocket again, he managed to hit Davis Tadlock, the golfer who has become a good receiver — for a near touchdown. Tadlock made a dive for the end zone and was ruled down near the goal line. From there, Stolsworth got the winning TD on a sneak with just 8 seconds left.

“We had some bad calls, had some bad plays, had a lot of adversity to fight through,” Nixon said. “But in the end, we got it done.”

Stolsworth and Houston work extra every day to keep getting it done. They have chemistry as well as timing and they believe in each other.

“Before practice, after practice, even on Sundays we come up to the field to work,” Houston said. “I always work on running those routes crisp and clean.”

Nixon said Houston, the reigning county track champ in the 100 meters and 110 hurdles, is learning and adjusting. He’s a magnet now for multiple defenders on every obvious passing down, one underneath, one over the top.

So far this season, teams also are trying to be physical with him at the line of scrimmage, getting hands on him, trying hard to disrupt his route.

“What we’ve told Jalen is he can’t be a robot, he just has to keep working to get open,” Nixon said. “He’s a huge asset even when he’s not making a lot of catches. When he sells that vertical route, he’s probably taking two defenders with him. That should give us opportunities to run the ball or throw to our other receivers.”

Friday’s game marked the fourth time in his career that Houston has reached 150 receiving yards in a game. It was the ninth time Stolsworth has fired for more than 200 yards for a run-first program. He threw for a school-record 358 yards  in last season’s loss to South Iredell, with Houston latching on to nine aerials for 170 yards and two scores.

But records don’t mean much when you lose.  These two guys are all about winning.

“Winning football games means a lot to both of us,” Houston said. “We want to help West Rowan get back where it needs to be.”