Prep Football: Rowan schools haven’t had much success against Wonders 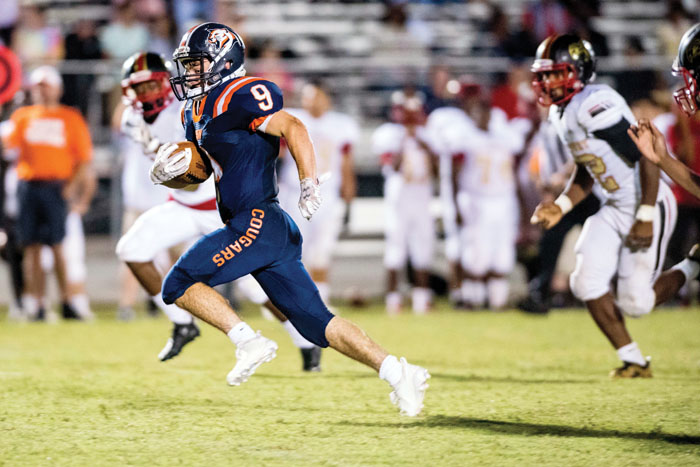 Despite the records, history says it won’t be any fun for the Cougars, although they are in better position than they were in 2017 when they limped out of this game with a 50-0, running-clock setback.

A.L. Brown led 34-o by halftime last year. The Wonders scored on the ground, through the air, on a punt return and on an interception return. They even kicked a field goal with a minute left to make it 50-0. Carson coaches probably weren’t thrilled with that.

A.L. Brown’s football history is staggering. Every area fan is aware of the most amazing stat — no losing seasons since 1977. The Wonders were just 3-7  in 1977, but they still went 1-0 against Rowan County, taking a 19-14 verdict against South Rowan.

South Rowan, of course, is a handful of miles from Kannapolis and owns much of Rowan’s history against the Wonders.

The schools played 56 straight seasons from the time South opened in 1961 through 2016. The teams tied twice. A.L. Brown won 46. South won eight. Each of those eight South victories triggered celebrations of earthquake proportions. Some caused the printing of commemorative T-shirts that are now collector’s items. In the early 1980s, when both programs were both extremely good,  the rivalry peaked with a stretch of amazing games in front of packed stadiums. South’s last triumph in the series came in 2009, a monumental, 21-19 win on South’s field by South’s last winning team.

Given South’s current modest enrollment and membership in a 10-team conference, it’s unlikely the Raiders will have the Wonders back on the schedule in the foreseeable future.

When South bowed out of the series, Carson, by far the biggest school in Rowan with 1,300-plus students, stepped into it as the new southern Rowan representative and played A.L. Brown for the first time in football. Last year didn’t go well, but Carson is a lot better in every way this year, much deeper and faster, although still not nearly as fast or deep as the Wonders traditionally are.

Actually, Carson may not be on the Wonders’ schedule long. When the under-construction West Cabarrus school opens, it may be a logical replacement for Carson.

West Rowan is a program that likes challenges and it had schedule openings when realignment placed the Falcons in the six-team North Piedmont Conference last year. West Rowan renewed its rivalry with A.L. Brown last fall and will be making its first trip to Kannapolis in more than a decade on Sept. 14.

While West has dominated Rowan and has a nice record against just about everybody the last 20 years, it is 1-15 all-time against A.L. Brown. That lone success was a wild one, 25-22, in Mount Ulla in 2000. Current North Rowan coach Ben Hampton was one of the heroes.

Speaking of North Rowan, it’s the only Rowan school that can brag about playoff wins against the Wonders. North won memorable postseason meetings in 1982 and 1992, but is still only 5-16 against the Wonders all-time. North is 1A now, so future meetings with the Wonders are unlikely. The schools haven’t met in football since 2004. The last time the Cavaliers beat A.L. Brown was 20-19 in 2001.

East Rowan is the only Rowan school that can say that it owns a winning streak against A.L. Brown. That winning streak is one game. East won the last meeting of the schools in 2004, a fairly incredible victory (21-20) that made a legend of Tank Allen and made Will Orbin, whose team went 5-7, the Rowan County Coach of the Year. All-time, East is 4-16 against the Wonders, including a victory against the 1997 Wonders, who were 15-1 and 3A state champions. The victory by W.A. Cline’s 1994 Mustangs against A.L. Brown  probably was equally astounding.

There were some pretty awesome games in that series in the 1960s and 1970s, but Salisbury and A.L. Brown haven’t tangled since 1992. The most recent win by the Hornets was in 1975 when the Wonders went 4-6 and the Hornets were 8-1-1. That Salisbury team, by the way, still didn’t make the playoffs, a reminder of just how much times have changed.

In the old days, China Grove, Landis, Spencer and even Rockwell took their shots against Kannapolis teams, but with limited success.

Look for a pretty good game tonight at A.L. Brown’s Memorial Stadium. Just don’t expect any miracles from the guys in blue and orange.

It’s a very limited slate for a football Friday. North Rowan played Thursday, while West Rowan, Salisbury and South Rowan are off this week.

The picks were 5-1 last week. Didn’t see Davie’s upset of North Davidson coming. The picks are 9-3 for the season.

I’m sold on East Rowan and I believe the Mustangs (2-0) will roll again tonight at East Chapel Hill (0-1), which didn’t have a varsity team last season and fell last week, 48-6.

Davie (1-1) at Mooresville (1-0)  is a tough call because Davie is as unpredictable as it gets. The War Eagles had close to zero offense in their opener but had crazy offense last week. Mooresville was stupendous against the run against West Rowan, but Davie doesn’t appear to have much interest in running, putting it in the air 45 times last week.