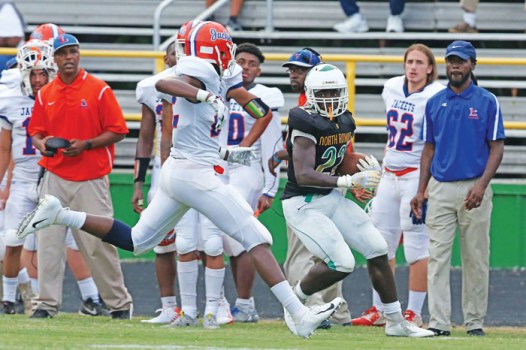 Malcom Wilson #22 for North Rowan picks up 28 yards on Northís first play from scrimmage. James Sipes for the Salisbury Post 8/30/2018 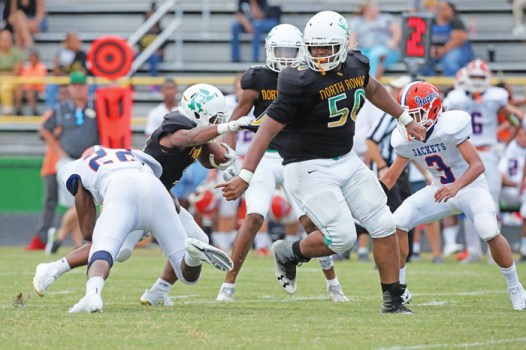 North Rowanís #9 David Broadus hangs on to #50 Tyquan Young and followed him through a hole in the Lexington defense. James Sipes for the Salisbury Post 8/30/2018 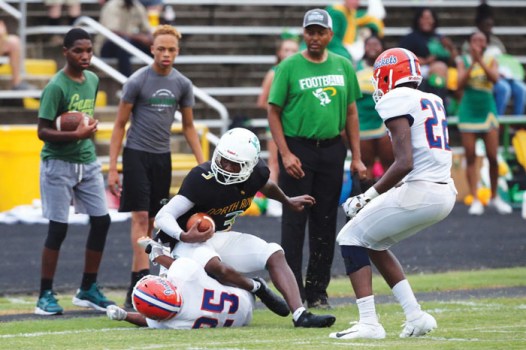 Taking over for injured QB Willis Mitchell, #3 Quintous Smith,Jr picks up 20 yards on a QB keeper. James Sipes for the Salisbury Post 8/30/2018 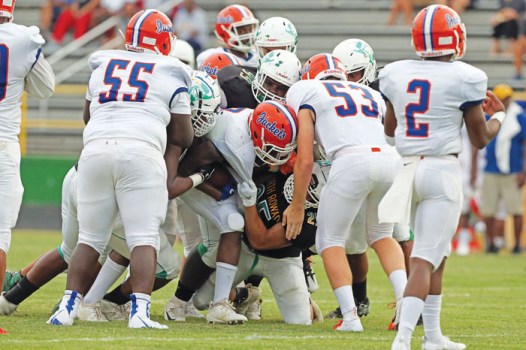 Lexingtonís Stephon Fortune with the ball is tackled by multiple Cavaliers during Thursday nightís game. James Sipes for the Salisbury Post 8/30/2018 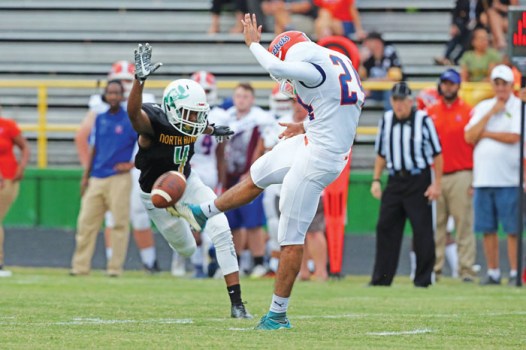 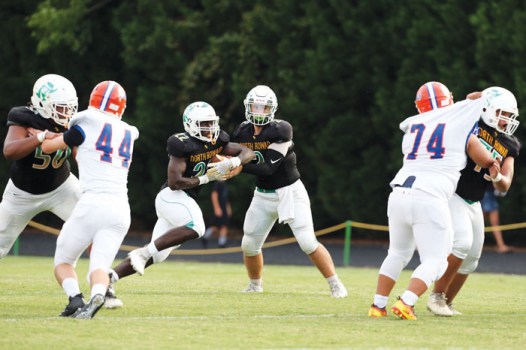 North Rowan QB #2 Willis Mitchell hands off to #22 Malcolm Wilson for a 28 yard pickup to start the game. James Sipes for the Salisbury Post 8/30/2018 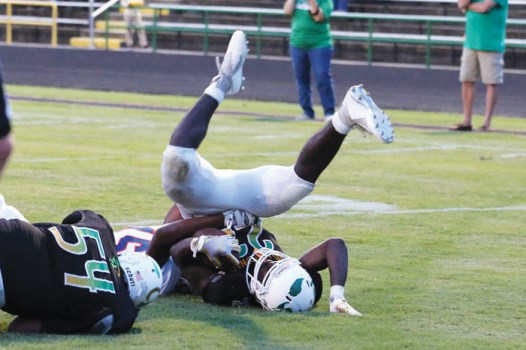 North Rowanís Malcom Wilson picks up his second Cavalier toudown of the game. James Sipes for the Salisbury Post 8/30/2018 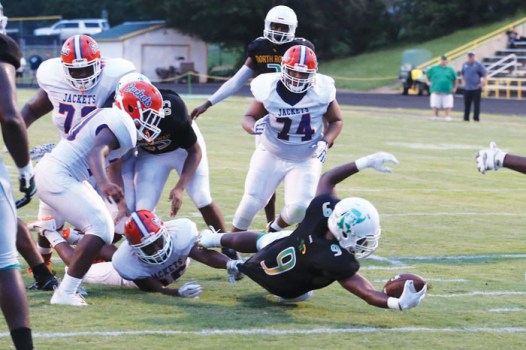 North Rowanís #9 David Broadus reaches out to the goal line but officials ruled his knee was down before the ball crossed the goal line. James Sipes for the Salisbury Post 8/30/2018 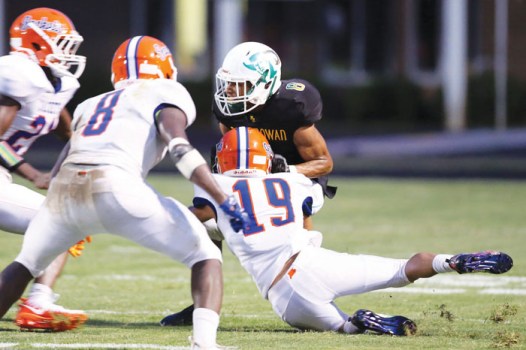 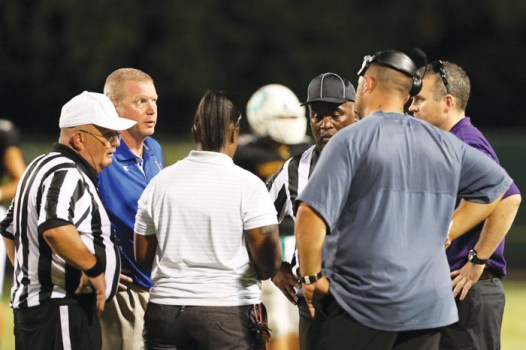 Coaches and officials view the weather after seeing lighting after half time. The game would be called with 11:49 to go with North Rowan claiming a 17-0 victory. James Sipes for the Salisbury Post 8/30/2018 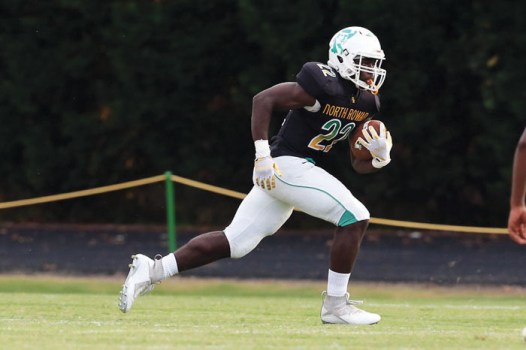 Malcom Wilson #22 picks up 9 yards off a screen pass from QB Willis Mitchell. James Sipes for the Salisbury Post 8/30/2018 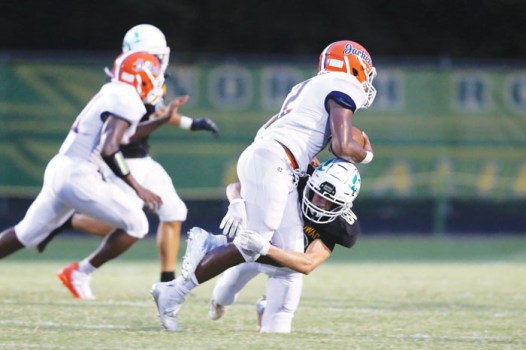 North Rowanís #80 Spencer Everhart stops Lexingtonís receiver from getting to the end zone. James Sipes for the Salisbury Post 8/30/2018

The Cavaliers won 17-0 over Lexington in a non-conference game that was halted early by serious lightning at the end of the third quarter.

After a sweltering but dry first half, there also was a 48-minute weather delay as the teams were preparing for the second-half kickoff.

“The game was moved up to Thursday because of weather worries,” North linebacker Tyzai Lyles said. “So we knew we might be facing a night  like this. We’d made up our minds to stay positive no matter what happened.”

Lyles made a lot of plays, including a huge interception and return. Acrobatic sophomore DBS Xzavier Davis and Jaharion Graham made plays. Safety Spencer Everhart made plays. In the box, players such as Malachi Turner, Nautica Patterson and Jordan Goodine made plays, destroying Lexington’s running game right from the outset.

“We got physical against the run,” Lyles said. “After that, they couldn’t do that much.”

North was better when it didn’t have the ball, but running back Malcolm Wilson did his tackle-shredding thing. He scored twice. He had a 23-yard TD run on which he pin-balled off five or six defenders. He managed 18 hard-earned yards in the third quarter to get past 100 in the abbreviated game. He finished with 103.

North played most of the game without starting quarterback Willis Mitchell. He exited the game when he hurt his shoulder on a sack, but the Cavaliers are optimistic it’s a short-term absence. North’s leading receiver Quintous Smith filled in at quarterback and did an admirable job. He didn’t complete any passes, but he had a 19-yard run and did enough to finish off the win.

“Quintous can throw it, but he hasn’t had many reps at quarterback,” North head coach Ben Hampton said. “We weren’t able to keep the offense balanced up, and they were able to make it harder for us to run the ball, but Quintous did a good job of managing the game.”

North began the game with a solid, balanced drive that included completions by Mitchell to Wilson, Russell Bacon and Logan Stoner. North reached the Lexington 13 before the drive stalled. JD Weaver punched through a 30-yard field goal.

Patterson made a crunching hit on the kickoff at the Lexington 24, and the Yellow Jackets (1-1) went three-and-out. Davis lost a fumble on the punt return, but North quickly stopped Lexington again.

Lexington had no positive plays on its first two possessions.

Late in the first quarter, Wilson made his remarkable touchdown run to make it 10-0, turning the left corner when it looked like he had nothing, and then spinning and fighting his way through a series of would-be tacklers.

“Everyone was putting their heads down, but I just kept going,” Wilson said.

Lyles picked off a second-quarter pass by Lexington’s Rahmel Ewart and rumbled down the right sideline almost to the Lexington 5. Wilson got his second TD on a short run right after that, and Weaver’s PAT made it 17-0.

Lexington made a switch to sophomore quarterback Tedric Jenkins, and his strong left arm provided hope for the Yellow Jackets. He got their offense moving some, but Graham picked off a ball that ricocheted off a receiver to turn the Yellow Jackets away late in the first half.

It was more circus than football after that, with 12 minutes of soggy,third-quarter action and lots of flags squeezed in between the weather delay and a genuine storm.

North successfully punched away at the clock in the third quarter, for the most part, but did lose one wet snap.

“We’ve faced a ton of adversity already this season — injuries, weather, penalties,” Hampton said. “Fortunately our defense was lights-out again and our offense did enough early in the game to get us a win.”

NOTES: North plays at Carson on Sept. 7, and then has its open week. The Cavaliers won’t be back home until they host Albemarle on Oct. 5.  … North beat Lexington for the sixth straight season. … Weaver had a perfectly placed punt early that Everhart downed on the Lexington 1.