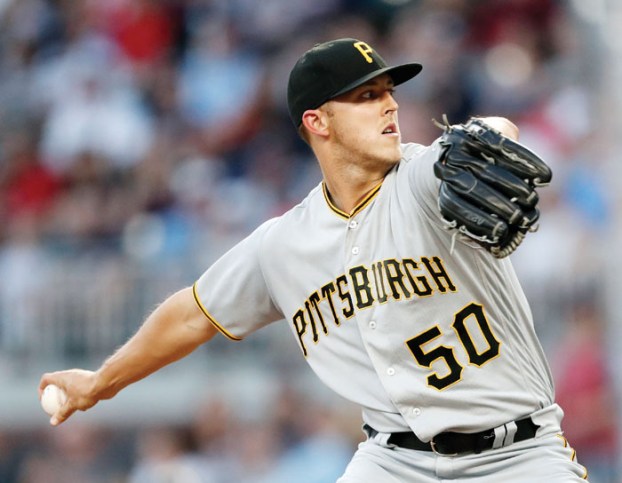 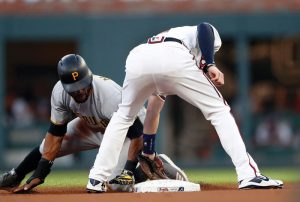 Pittsburgh Pirates’ Starling Marte (6) is tagged out by Atlanta Braves shortstop Dansby Swanson as he tried to steal second base during the first inning of a baseball game Friday, Aug. 31, 2018, in Atlanta. (AP Photo/John Bazemore)

By CHARLES ODUM, AP Sports Writer
ATLANTA (AP) — Jameson Taillon extended the Atlanta Braves’ home struggles, leaving the NL East tight entering the final month of the season.
Gregory Polanco’s eighth-inning single drove in Adam Frazier with the tiebreaking run, Taillon allowed only two runs and the Pittsburgh Pirates recovered after blowing a two-run lead to beat the Braves 3-2 on Friday night.
The first-place Braves, who have lost five of their last seven, saw their NL East lead shrink to two games over Philadelphia entering September.
“There are definitely some difficult and intense situations, but I think our mindset is to continue to have fun,” third baseman Johan Camargo said through a translator.
Ronald Acuna Jr. and Camargo and hit home runs in the sixth and seventh innings, respectively, for a 2-2 tie before the Pirates reclaimed the lead in the eighth.
The Braves have lost seven of their last eight home games.
Manager Brian Snitker said his young players, including 20-year-old Acuna, 21-year-old Ozzie Albies and 24-year-old Camargo, will gain valuable experience in the final month.
“It’s going to be interesting. It’s going to be a great experience for them,” Snitker said. “You can’t simulate that anywhere.”
Taillon (11-9) gave up two runs on five hits in seven innings.
“Tonight was one of those nights that was really fun,” Taillon said, adding he had a good chemistry with catchers Elias Diaz and Francisco Cervelli. “It seemed like everything they were putting down I already had gripped and already had in my mind and I was able to execute.”
Felipe Vazquez pitched out of trouble in the ninth for his 29th save in 33 opportunities. Camargo hit a one-out single up the middle, past a diving Josh Harrison, and advanced to second on Kurt Suzuki’s single to right. Camargo was forced out at third on a fielder’s choice before Vazquez struck out Dansby Swanson to end the game.
Frazier, pinch-hitting for Taillon, led off the eighth with a walk from Brad Brach (2-4) and moved to second when Albies bobbled Starling Marte’s grounder at second base for an error. Frazier scored the unearned run on Polanco’s single up the middle.
Corey Dickerson led off the second with a double down the right-field line and scored on a single up the middle by Diaz. Anibal Sanchez ended the second with three straight strikeouts to begin a stretch of retiring 12 consecutive batters.
Sanchez allowed two runs, one earned, on five hits in 5 1/3 innings.
TRAINER’S ROOM
Pirates: Diaz left the game in the seventh with a sore right hamstring. He was limping after running to first on his groundout to shortstop.
Braves: RHP Peter Moylan aggravated his right forearm strain, ending his rehab assignment and hopes of returning this season. He was transferred to the 60-day disabled list. … RHP Arodys Vizcaino (right shoulder inflammation) threw live batting practice and is ready to begin a rehab assignment with Triple-A Gwinnett on Sunday. … RHP Brandon McCarthy (knee) allowed two runs on four hits in two innings in his rehab outing with Gwinnett.
CONSISTENT TAILLON
Taillon became one of only three pitches in the majors with at least 17 consecutive starts allowing no more than three earned runs.
BIG MONTH
Acuna capped a productive August. The rookie led the NL with 39 hits and 25 runs and tied for the league lead with 11 homers, giving him 22. The Braves said Acuna is the first NL rookie over the last 110 seasons with at least 39 hits and 11 homers in a month.
GREAT CATCH
Braves center fielder Ender Inciarte made a leaping catch of a drive hit by David Freese to end the first inning. Watching the catch from the mound, Sanchez pumped his right fist in approval.
REINFORCEMENTS
Snitker said catcher Rene Rivera, obtained off waivers from the Angels on Wednesday, will be among four or five players promoted to the Atlanta roster on Saturday. Snitker said more players may join Atlanta after Gwinnett’s season ends on Monday.
UP NEXT
Pirates: RHP Chris Archer (4-7, 4.72) has a 6.45 ERA in five starts with Pittsburgh since being acquired from Tampa Bay on July 31. He allowed one run in four innings in a 1-0 loss to the Braves on Aug. 20.
Braves: RHP Kevin Gausman (9-9, 3.89) will face the Pirates for the second time since his trade to the Braves. Gausman threw eight scoreless innings, allowing four hits, in a 6-1 win at Pittsburgh on Aug. 21.
___
More AP MLB: https://apnews.com/tag/MLB and https://twitter.com/AP_Sports

When weather turns cold, where do Rowan County wildlife go?