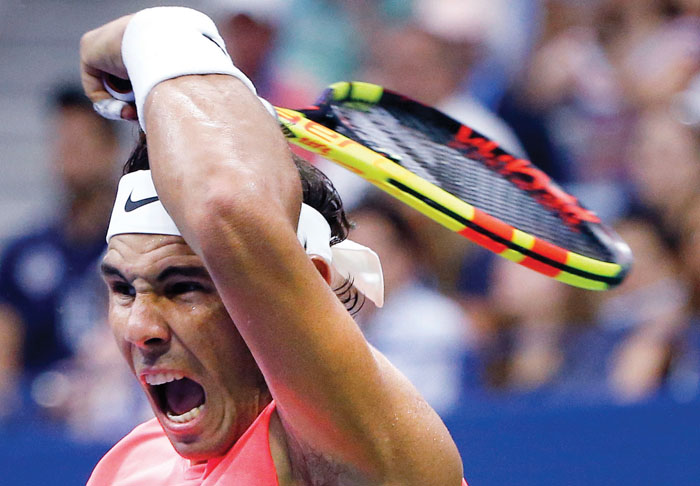 Rafael Nadal, of Spain, returns a shot to Karen Khachanov, of Russia, during the third round of the U.S. Open tennis tournament, Friday, Aug. 31, 2018, in New York. (AP Photo/Jason DeCrow)

By HOWARD FENDRICH, AP Tennis Writer
NEW YORK (AP) — Rafael Nadal’s knee was bothering him. His decade-younger, barrel-chested U.S. Open foe was bashing the ball.
The defending champion was two points away from falling into a two-set hole. Then he was two points away from dropping the third set. And then he was one point from losing the fourth set and being pushed to a fifth.
As all of those key moments presented themselves, he managed to come through. The No. 1-ranked Nadal overcame a shaky start Friday and used his customary relentless style to wear down No. 27 seed Karen Khachanov physically and mentally, eventually getting to the fourth round with an entertaining and back-and-forth 5-7, 7-5, 7-6 (7), 7-6 (3) victory that took 4 hours, 23 minutes.
“I escaped a very tough situation,” Nadal said, “so it’s a great thing.”
The man he beat in last year’s final at Flushing Meadows, No. 5 Kevin Anderson, got through his own tough test against an up-and-coming opponent, edging No. 28 Denis Shapovalov 3-6, 6-4, 6-4, 4-6, 6-4.
After Nadal ceded the opening set, he had a trainer put tape under his right knee, which has caused problems off-and-on for the Spaniard over the years. Nadal later got more wrapping there during a 10-minute break at 5-all in the second set while the retractable roof at Arthur Ashe Stadium was shut because of light rain.
Just prior to the delay, Khachanov had served for that set at 5-4, and three times was two points away from taking it. But he couldn’t get closer than that. Nadal broke for 5-all and, after the delay, broke again to even it at a set apiece, aided by two double-faults from Khachanov. When Nadal earned that set with a passing shot that drew an errant volley, he crouched and yelled. Folks sitting in his guest box rose. A chunk of the crowd gave a standing ovation. Khachanov swatted a ball in disgust.
Nadal said the brief break was just what he needed.
“I just trying to calm myself for a moment. He was playing well,” Nadal said. “But for me, the most important thing is have the right tempo when I am playing. For some moments I felt things were going too fast in my mind. I didn’t take the time to do the right steps, to go to the ball with the right decision, with the right determination, with the right timing.”
The end of the third set was similar: Khachanov twice was two points from owning it and couldn’t get across the line, helping Nadal with three double-faults in the tiebreaker. And while Nadal kept letting set points slip away, four in all, he made No. 5 count, and how. It was a quintessential Nadal point, too: a 40-stroke exchange — yes, 40! — that featured so much defense from Nadal until Khachanov netted a backhand, then tossed his racket on the sideline.
“I needed that set, of course,” Nadal said.
He had one more pivotal part to get through: Khachanov’s set point in the fourth while ahead 6-5 as Nadal served at 30-40. But Khachanov put a forehand in the net there, and after a thrilling point that featured a drop shot, a lob, a leaping ‘tweener by Khachanov and a volley winner by Nadal, they headed to another tiebreaker.
This one was pretty much all Nadal.
In sum, he handled the particularly crucial points better than Khachanov did. Which, really, should come as no surprise given the disparity in age, experience and success. One man, the 32-year-old Nadal, owns 17 Grand Slam titles, three at Flushing Meadows. The other, the 22-year-old Khachanov, has never been past the fourth round at a major tournament.
The sort of big hitting the 6-foot-6, 192-pound Russian displayed Friday, including 22 aces and booming groundstrokes, bodes well for his future.
“That just shows that I’m really close to this high level against top guys. Hopefully it will be soon on my side,” Khachanov said.
Perhaps, but Nadal is still at the top of the game.
After they finished, Ashe was the site for Serena Williams vs. Venus Williams, Part 30. It’s their earliest meeting at a Grand Slam tournament in 20 years.
Earlier, 2017 champion Sloane Stephens betrayed a lot more emotion on that court than she usually shows anywhere, all of the double fist pumps making perfectly clear just how tight and tense things had been during her 6-3, 6-4 win against two-time runner-up Victoria Azarenka.
Stephens, the No. 3 seed, grabbed the last three games after returning from a brief break while the Ashe roof was shut (it was then reopened before Nadal vs. Khachanov).
Stephens went from up a set and 3-1 in the second to down 4-3 when Azarenka took three games in a row. That’s when rain came.
“The man upstairs,” Stephens said, “was looking out for me.”
___
More AP tennis coverage: https://apnews.com/tag/apf-Tennis and https://twitter.com/AP_Sports