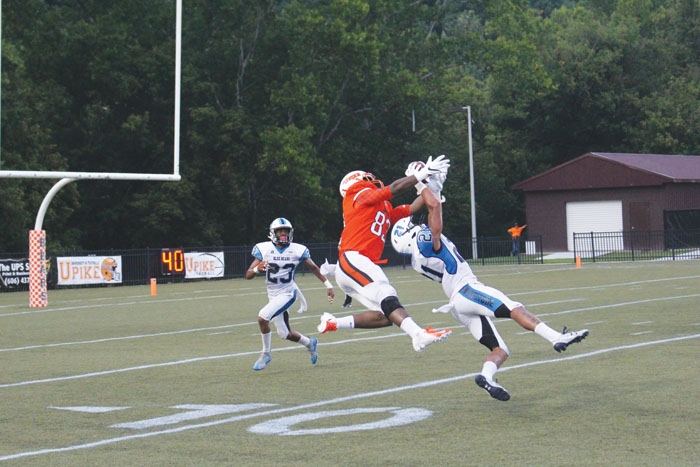 Pikeville got on the score board first with a 27-yard touchdown pass from Bowen Smith to Arties Clark.

After marching down the field, Livingstone freshman quarterback Miles Hayes threw to senior wide receiver Everett Ransom in the end zone, but despite being interfered with, Ransom pulled down the pass with one hand. Antoine Akundu’s point-after made the score 7-7 with 5:54 to play in the second quarter.

Pikeville quickly answered the Blue Bears, scoring a touchdown right before the half, giving UPike a seven-point lead.

As the second quarter winding down, the Blue Bears threatened in the red zone, however a 44-yard field goal from Akundu, as time expired, cut into UPike’s lead, 14-10.

In the third quarter, LC took the lead for the first time on a 4-yard touchdown pass from Hayes to new 6-7 receiver Corey Hall, giving the Blue Bears a 17-14 lead.

However, UPike switched quarterbacks and went on a 21-point run, taking a commanding, 35-17 over the Blue Bears. The Blue Bears scored in the fourth on a 3-yard run from Justin Ruffin, cutting the deficit to 42-23.

UPike (1-1) scored on a 31-yard touchdown run from quarterback Trevon Wofford to extend the Bears lead 49-23, and added a field goal with less than a minute left in the game.

As a team, Livingstone struggled to run the football, netting just 33 yards on 38 attempts. The Blue Bears also had issues stopping the run on defense, as UPike rushed for 267 yards and three scores.

The Blue Bears are on the road next Saturday, taking on Allen University in Columbia, S.C.

Prep Football: Rowan schools haven’t had much success against…