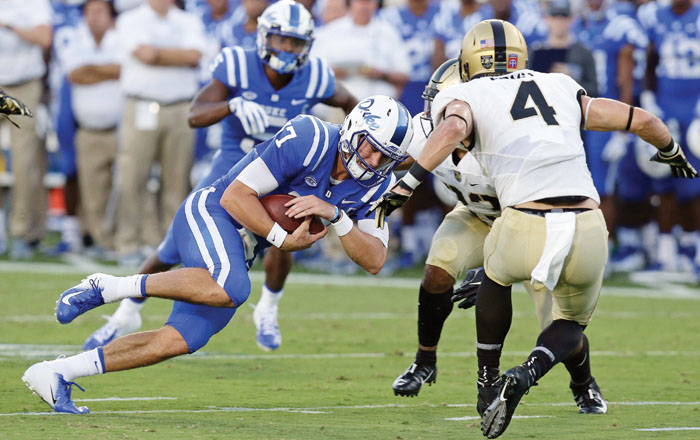 Duke quarterback Daniel Jones (17) runs the ball while Army's Max Regan (4) looks for the tackle during the first half of an NCAA college football game in Durham, N.C., Friday, Aug. 31, 2018. (AP Photo/Gerry Broome)

By JOEDY McCREARY, AP Sports Writer
DURHAM, N.C. (AP) — Daniel Jones was a more efficient passer than Army’s quarterback — and that’s more impressive than it might seem.
Jones threw for one touchdown and rushed for another score, helping Duke open with a 34-14 victory over Army on Friday night.
Jones was 13 of 17 for 197 yards with a 1-yard touchdown run and a 25-yard scoring pass to Aaron Young.
“It started with a strong running game. … The offensive line and their ability to impose their will and open up lanes for the running backs was big,” Jones said. “Only 17 pass attempts but when we did, we were efficient with it, and it was good to see.”
The biggest surprise of the night was how well his counterpart — Kelvin Hopkins Jr., a junior making his first career start — threw the ball. The passing game has largely been an afterthought at Army, which for years has been known for a triple-option offense that led the nation in rushing last year.
Hopkins also threw for 197 yards — on 10-of-21 passing — with a 45-yard touchdown pass to Cam Harrison. It was the most yards passing for Army since 2015.
“No, we did not” expect 21 passes from Army, linebacker Joe Giles-Harris said. “It’s hard to prepare for something like that from an option team, but at the same time, we did our best. And you’ve got to be ready for stuff like that. When you go up, you can’t run the ball forever. … All summer, we kind of prepared for a couple of different passes and they ran them today.”
Brittain Brown had a 12-yard touchdown run, backup Deon Jackson added a 7-yard score and Collin Wareham kicked two field goals for the Blue Devils, who responded to both Army touchdowns by scoring TDs of their own to win their opener for the seventh straight year and atone for their most recent loss — a 21-16 defeat at Army last November.
“Being able to push the ball down the field and keep the defense on their heels has been an emphasis of ours,” Jones said.
Hopkins also had a short rushing touchdown before his long scoring pass in the final minute of the third quarter pulled the Black Knights to 24-14. Jones followed with his TD to Young that restored Duke’s 17-point lead, and Ben Humphreys effectively ended it by blocking Landon Salyers’ 45-yard field goal attempt with less than 7 minutes left.
THE TAKEAWAY
Army: The Black Knights, who led the Bowl Subdivision last season at 362.3 yards rushing per game but are replacing four starting offensive linemen from that team, were more willing to air it out with Hopkins. He threw more passes in the first half (five) than Army did in seven of its games in 2017, and finished with the academy’s most yards passing since its 208-yard day against rival Navy three years ago.
“The things we wanted to do didn’t turn out how we wanted to,” Hopkins said. “They were moving fast laterally, couldn’t get them reach-blocked and things like that. But our pass game was working, O-line was killing it, they were giving us time and things like that. So we just kind of went with what was hot at the moment.”
Duke: The good news for Duke’s defense: the Blue Devils recovered two fumbles from an Army team that lost just five of them during its 10-win season in 2017. Now, the bad: Duke’s secondary was at times lit up by the option-oriented Black Knights, who have pretty much ignored the forward pass over the years.
GREAT BRITTAIN
Brown finished with 75 yards on 11 carries and for most of the night appeared headed for his third career 100-yard performance. He hurt his right knee while going down in the third quarter, then came back but didn’t carry the ball in the fourth quarter. Coach David Cutcliffe said Brown’s knee was stable but expected it to be sore Saturday. Duke improved to 6-0 in Brown’s career when he has more than 10 carries.
KEY STATS
Young finished with 114 yards on four catches. . Duke has not allowed a point in the fourth quarter of six consecutive games. . Army was 4 for 4 on fourth downs.
UP NEXT
Army: The Black Knights play their home opener against the newest FBS addition, Liberty, on Sept. 8.
Duke: The Blue Devils play the first of two straight nonconference road games against Power Five teams when they visit Northwestern on Sept. 8.
___
More AP college football: https://apnews.com/tag/Collegefootball and https://twitter.com/AP_Top25