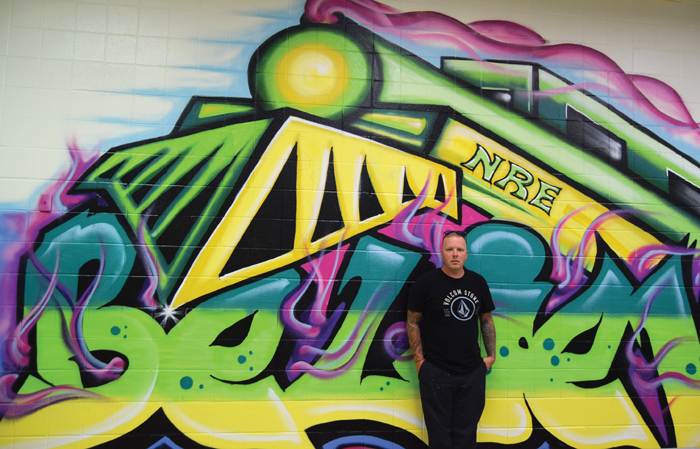 Artist Shane Pierce stands in front of a street art style mural he donated to North Rowan Elementary. The piece encourages students to believe in themselves. Rebecca Rider/Salisbury Post

SPENCER — When students at North Rowan Elementary School walk into the cafeteria this year, they’ll get a little extra boost. A new mural — donated by Shane Pierce, the artist behind Abstract Dissent — features a steam engine chugging away and encourages students to believe in themselves.

Principal Katherine Bryant said that since classes resumed Monday, students and teachers alike have fallen in love with the colorful piece of street art.

But more than the message, students are also touched by the artist and the story behind the work.

“(He) gave it to us, and that’s something they’re not used to,” Bryant said.

Pierce is a Charlotte-based artist who works in several mediums, but he’s become known around Salisbury for his vibrant street art and giving nature. His work decorates the walls of local businesses and organizations like the Pedal Factory and Grievous Gallery. Most of what he paints in the area is done free of charge.

“I think half my work is donated,” Pierce said.

The artwork at North Rowan Elementary stands out in more ways than one. Pierce said he knows what it’s like to have a rough start in life. He grew up in a single-parent household and was dependent on welfare as a child. It’s something that many students at the school — where more than 90 percent of students qualify for free and reduced-price lunch — can relate to.

“I normally don’t look back,” Pierce said, “but this makes me look back.”

In addition to providing art for the school, Pierce hopes that students will be inspired to believe in themselves and to carve out a positive future despite the struggles they’ve faced.

“I hope that they see that they have as good a chance as anyone else,” he said.

School administrators and local residents are impressed not just by the work but by the feeling behind it.

“Not only did Shane leave his art for the kids, he left his heart on this wall,” said Cybil Jones, founder of the nonprofit group Engage North Rowan.

Jones is the one who arranged for Pierce to paint the mural, after seeing his work in the Pedal Factory.

“It made that warehouse come alive,” she said.

Originally, the school mural was supposed to feature the word “community,” but the design changed at the last minute — something that Pierce and school leaders are pleased with.

While Pierce works in other mediums, his street art is in high demand in Rowan County.

“The community is bringing me back; the community wants the art,” he said. “I’ve never experienced anything like it.”

Bryant and Jones said they hope the mural will continue to inspire kids for years to come. There also are plans to create a plaque featuring a social media post Pierce made about the mural and the message behind it.

To learn more about Shane Pierce and his artwork, visit https://abstractdissent.com or search Abstract Dissent on social media.