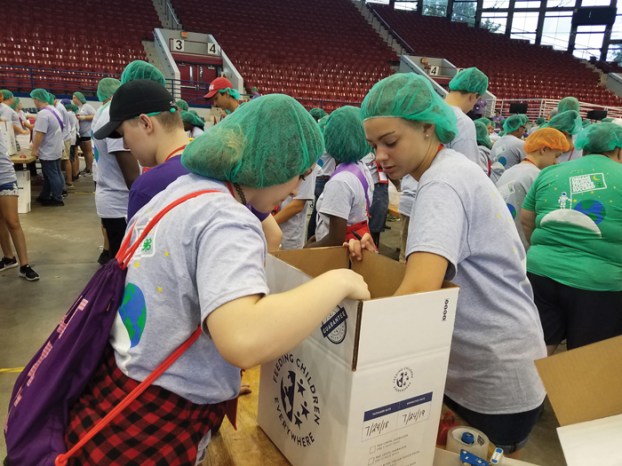 Kayleigh Hill, left, and Emily Barlow work to package and box meals as part of the Feeding Children Everywhere event held during the 2018 NC 4H Congress. 4Hers packed 50,000 meals during this service activity. Submitted photo

SALISBURY — Summer has been a busy time for Rowan County 4H. Club members have been recognized for their achievements and participation in Citizenship Focus, district-level project record books and presentations, the state 4H horse show and poultry judging.

Now, it’s time to recognize 4H youths for additional achievements during the summer.

In the last week of June, Rowan County 4Her Sam Oster competed in the National 4H Shooting Sports competition held in Grand Island, Nebraska. Sam was part of the North Carolina 4H air pistol team. He shot his best score ever in slow fire and represented Rowan County and North Carolina well.

On July 10-12, 4Hers Sam Oster and Nathan Gobble attended the 71st 4H Electric Congress held at UNC-Wilmington. Since 1947, Duke Energy and Dominion Energy have sponsored the annual congress to emphasize electrical energy concepts, energy conservation and safety working with electricity. Electric Congress is held for county-winning 4Hers who participate in the electric program.

There are lots of presentation categories that 4Hers can compete in. This is a great way to get youths involved in learning and practicing their public speaking skills.

4H Congress was also held at N.C. State University on July 21-24. This annual event focuses on leadership, citizenship, personal development and award recognition of 4Hers from across North Carolina. Emily Barlow, Kayleigh Hill and Holly Wallace represented Rowan County and participated in many workshops, listened to guest speakers, participated in the democratic process, explored Raleigh and met new 4H friends from across North Carolina.

These 4Hers also participated in the 4H Candlelighting Ceremony and helped package 50,000 meals to be donated to families both locally and abroad.

The most prestigious honor that a North Carolina 4Her can receive is being inducted into the N.C. 4H Honor Club. Membership  is bestowed on those 4Hers who have exhibited outstanding 4H citizenship and leadership throughout their 4H career.

An honor club member continues to provide leadership and service to the total 4H program throughout life. To be eligible, a 4Her must have completed three or more years of 4H club work and be between 16 and 20 on Jan. 1 of the year of their application. This year, two Rowan County 4Hers were inducted into the honor club during 4H Congress — Hannah Barringer and Sam Oster.

On Aug. 11, 4H volunteer Charles Nettles along with 4Her Sam Oster conducted an electric workshop for 10 local youths and their parents. These youths gained an introduction to electricity, learned about house wiring and were able to put together an electric kit.

Recently, 4Her Kayleigh Hill was recognized for her beautiful photography in the N.C. 4H photo contest. She submitted a photo in the nature’s beauty senior division category and won third place.

As summer comes to an end, the 4H year continues. If your children are not already involved in 4H, this is a great time to get started.

There are currently nine 4H clubs in the county, with two additional clubs this fall. These clubs meet once a month for a business meeting and provide learning opportunities for ages 5 to 18. There are other 4H opportunities available as well, including project record books, presentations, awards and recognition, workshops, winter enrichment, teen retreats and more.

For more information on 4H, contact Laura Allen at 704-216-8970 or laura_allen@ncsu.edu. You can also visit https://rowan.ces.ncsu.edu/ or the Rowan County 4H Program Facebook page, or come by the Rowan County Cooperative Extension office.

SALISBURY — Things have changed a lot in the past 20 years at Partners in Learning. The center opened a second... read more