Last summer’s solar eclipse, designated by NASA as the “Eclipse Across America,” generated unprecedented interest in a celestial event. A survey by the University of Michigan found that 216 million people – about 88 percent of the adult population – watched the eclipse as it unfolded on Aug. 21, 2017.

By comparison, a 1999 Gallup poll showed that only 70 percent of Americans over the age of 5 watched the Apollo 11 landing and first steps on the moon.

A group of science instructors from Rowan-Cabarrus Community College viewed the eclipse from Pisgah Astronomical Research Institute in the mountains near Brevard. As a member of the NASA media contact team, I covered the eclipse from Greenville, South Carolina.

Having seen this impressive total solar eclipse, several of these instructors are planning to travel to Chile in 2019 or 2020 to view another total eclipse that will pass over that country.

Chile is uniquely situated for astronomy. A long, narrow country on the Pacific coast of South America, Chile stretches more than 2,600 miles from north to south, yet it is never more than 220 miles wide. The towering Andes to the east and the cool Humboldt current of the Pacific to the west keep the skies of northern Chile clear most of the year.

This region, particularly the high Atacama Desert, is home to some of the most advanced observatories in the world. Five of the world’s 14 largest telescopes are found there. The Atacama Large Millimeter/submillimeter Array (ALMA) of radio telescopes, the most accurate telescope in the world, is on the eastern slopes of the desert near San Pedro.

More than 20 nations now participate collaboratively in these observatories.

Most international flights to Chile arrive in Santiago, the capital. Nestled in a central valley, Santiago is home to 7 million people, about 40 percent of the country’s population.

About the same distance from the equator as Atlanta, the city and its surroundings enjoy a temperate climate.

While in the Santiago area, first-time visitors will find much to do. The observation deck at Sky Costanera offers a 360-degree view from 1,000 feet above the city. The Museo Interactivo Mirador has a number of interactive exhibits on science and astronomy.

Near the city, a funicular takes riders to the top of San Cristobal mountain. Also nearby is the Observatorio Astronómico Andino, a spectacular facility that is part of Chile’s growing astrotourism industry.

The 90-minute drive to Valparaiso on the coast will take you past some of the vineyards and wineries for which the region is famous. (If you stop in for tastings, a designated driver would be a good idea.)

Route 68 from Santiago to Valparaiso is a four-lane highway comparable to interstates in the U.S.

Despite its low population density – only 18 million people, in a country reaching so far north and south – Chile has a well-maintained system of roads connecting most cities and towns. Domestic air travel on LATAM is frequently aboard modern Airbus A320 and A321 aircraft. 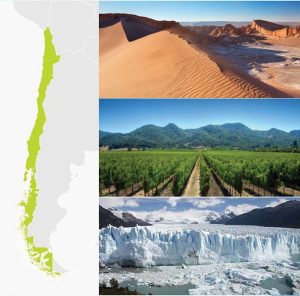 Traveling around the country, visitors quickly come to appreciate that Chile is one of the most economically and politically stable countries in Latin America. While Chile enjoys a stable exchange rate, its currency takes a day or two to get used to. Withdrawing 100,000 Chilean pesos (CLP) from an ATM feels like you are draining your checking account. However, you have only debited your account about 150 U.S. dollars.

At the airport, a bottled drink might seem exorbitantly priced at $2,000 CLP, but that’s only $3 in U.S. currency.

The paths of totality for the next two total solar eclipses will cross Chile and Argentina. On July 2, 2019, the eclipse will pass over the coastal resort of La Serena late in the afternoon. This area is home to many of Chile’s observatories, including facilities specifically for tourists, like the Cerro Mayu Observatory and Pangue Observatory.

Although this is winter in the southern hemisphere, the July date is favorable for summer travel from the U.S.

The next total eclipse will pass over southern Chile on Dec. 14, 2020. This eclipse will occur early in the afternoon during the southern summer season, giving better chances for favorable viewing. Cities in the path of totality include Temuco and Villarrica.

Information on both eclipses can be found online on the NASA Solar Eclipse Page at https://eclipse.gsfc.nasa.gov/solar.html.

Jack Howard teaches astronomy at Rowan-Cabarrus Community College and serves as an educational outreach volunteer with the NASA Solar System Ambassador program. He is one of 12 educators nationwide selected as a 2018 ambassador for the Astronomy in Chile Educator Ambassador Program (ACEAP). Contact him at jack.howard@rccc.edu.