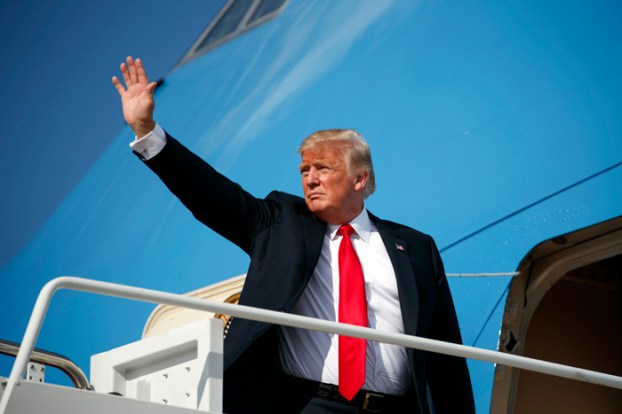 President Donald Trump waves as he boards Air Force One to travel to a campaign rally in Evansville, Ind., Thursday. Evan Vucci/Associated Press

RALEIGH — President Donald Trump will travel Friday to Charlotte to raise campaign funds for Rep. Ted Budd, R-13, and another U.S. House candidate, a planned visit coming amid uncertainty about whether North Carolina’s congressional districts might be redrawn under court order even before the fall vote.

The Republican president will have one public appearance to sign an executive order after he headlines a private fundraiser in Charlotte for Budd and candidate Mark Harris. Both Republicans lag significantly behind their Democratic opponents in cash on hand in districts observers say are the most competitive in the state.

National donors have already spent millions on races in those districts as Democrats attempt to flip control of the House to their party in November. They need just 23 seats.

The visit comes amid doubts about the future of North Carolina’s House districts. This week, a three-judge panel ruled the districts were illegal partisan gerrymanders. The judges found the GOP-controlled legislature redrew district lines in 2016 to mix and match Democratic voters to ensure Republicans could retain 10 of the state’s 13 congressional seats.

It’s not the first court ruling throwing out GOP-drawn congressional maps this year. The Pennsylvania Supreme Court in January found that state’s map to be unfairly drawn in favor of Republicans. The U.S. Supreme Court declined to hear an appeal from state Republicans and the new districts stood.

If the federal panel’s ruling in North Carolina is ultimately upheld and elections are held under new maps this year, the benefit for Democrats could be striking.

In Monday’s ruling, the court singled out a proposed map offered by the plaintiffs that could result in six Democratic-majority districts — double the party’s current number of seats.

While a decision on whether the maps must be redrawn is pending, the candidates are pushing forward as normal with their campaigns. For Budd in the 13th District and Harris in the 9th, that means addressing the immediate issue of securing more cash.

The last campaign finance reports released in July show Harris has less than $300,000 in campaign funds. His Democratic opponent, Dan McCready, has $1.8 million.

Trump’s stop in Charlotte to raise money for their campaigns signals the GOP is interceding for Harris and Budd, says John Dinan, a political science professor at Wake Forest University.

“In each of those cases, the Republican Party has presumably identified these races as ones that need shoring up financially,” Dinan said.

A fundraiser lunch will help Harris and Budd get donations from wealthy Mecklenburg County Republicans. A photo and a spot at a roundtable with Trump will go for $25,000, according to the invitation. A picture with the president is $10,000; just attending the reception is $1,000.

The 9th District has favored Republicans for decades, but it was redrawn in 2016 to span the eastern Charlotte suburbs, then along the South Carolina line toward Fayetteville.

The 13th District, which includes parts of Rowan County and suburban areas near Greensboro in the Piedmont Triad region, supported Trump over Hillary Clinton by 9 percentage points in the 2016 presidential election.

But in the face of a midterm backlash against the party in power, Democrats have a good shot at taking the seats. Harris, a Baptist minister, narrowly won an expensive, bitter primary campaign against 9th District GOP incumbent Robert Pittenger in the spring, but it drained his campaign cash.

“After 9/11, Dan McCready was called to serve his country,” the ad says. “In Iraq, he found another calling and was baptized in the Euphrates River.”

Budd is a first-term incumbent representing the 13th District. The gun store owner won the seat in 2016 in part after a crowded Republican primary with 16 other candidates.

The Democrats have selected candidates well suited to their districts, but if this week’s redistricting decision is enforced, it may not work to their immediate advantage in the highly competitive races.

Catawba College political science Professor Michael Bitzer points out candidates this year have been closely matched to districts. If the 9th District suddenly included liberal parts of Charlotte, it may hurt McCready.

“If you take the long view for Democrats, they would like this opinion,” says Bitzer. “They just wouldn’t like it this close and this short before November’s election.”

By Jack Howard Special to the Salisbury Post Last summer’s solar eclipse, designated by NASA as the “Eclipse Across America,”... read more