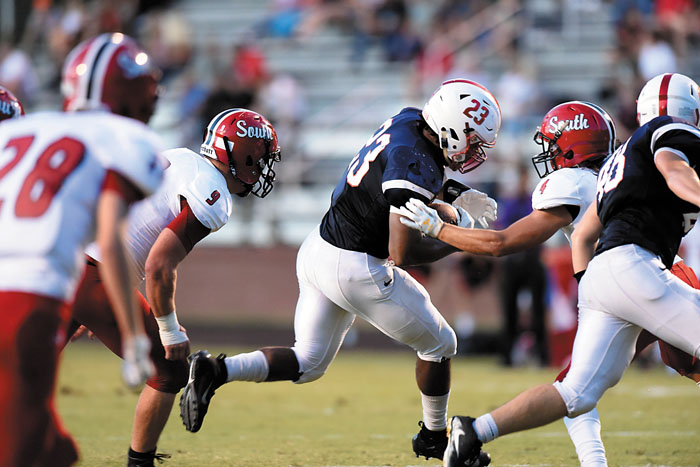 A key for Carson in Friday’s 28-7 win against Salisbury was  limiting the impact of sprinter Tyrone Johnson on kickoffs, punts and receptions.

Eric Turnbull, who was 4-for-4 on PATS for the Cougars (2-0), kept the ball away from Johnson on Carson’s five kickoffs.

“I think the Johnson kid only touched it once,” Carson head coach Joe Pinyan said.

Robert Barringer shared special teams player of the week honors with Turnbull because of his excellent coverage on kicks.

This is only the third 2-0 start for Carson in 13 seasons.

Pinyan’s 2015 club roared out of the gate 2-0 before losing a close one to Central Cabarrus in its third game. That team went 7-6.

The 2010  Cougars also started 2-0. Coached by Mark Woody, that was the best team in school history, winning its first five games before losing to Statesville. That team finished 10-3.

Carson squared its all-time record against Salisbury at 6-6.

Carson has a winning record against South Rowan and East Rowan. The Cougars are 5-6 against North Rowan and will have a chance to square that series on Sept. 7.

Carson has not fared well against West Rowan and is 1-12 against the Falcons, including an overtime playoff loss in 2015.

“Cipres blocked well, in addition to picking up some crucial yards,” Pinyan said.

Pyle’s long return on the second half kickoff was the turning point in the game.

Carson QBs Josh Lee and Justin Smith aren’t making much of an impact on the county’s statistical leaderboard, but Pinyan is happy with both of them.

“They continue to be a two-headed monster, and they’re providing leadership, as needed,” Pinyan said.

DB Steven Shuping was Carson’s defensive player of the week. He had six tackles, plus three assists. He had two hits for loss and forced a fumble.

Carson is scheduled to play at A.L. Brown on Friday. The Wonders romped, 50-0, last season in the first meeting of the schools in football.

Pinyan’s daughter, Amie, an East Rowan graduate, is getting married to former Salisbury High tight end Riley Gallagher on Saturday, so there will be pre-wedding activities on Friday. The coach indicated via text on Tuesday that his status for Friday was still “TBD.”

The win against Salisbury was the 127th of Pinyan’s head coaching career. Legendary Boyden coach Bill Ludwig is third on the county’s all-time list with 129.

Under second-year coach John Fitz, East is off to its first 2-0 start since 2007. That was a Brian Hinson-coached team that won its first four outings and finished 7-5.

The 1970 Mustangs also won their first two on the field, but had to forfeit one of those wins to South Rowan.

So this is, officially, just the fourth 2-0 start for East in 60 years of football.

East had winning teams in the 1996-99 era under coach Jeff Safrit, but all those teams lost to North Rowan the second week of the season.

East has had nine different head coaches since Safrit. Will Orbin, Hinson, Danny Misenheimer and Kenneth McClamrock all experienced some success, but no one since Safrit (33-25-1) finished his tenure with a winning career record.

W.A. Cline, the head coach of East’s exciting teams in the 1968-70 glory days, made a visit to East press box at halftime of Friday’s 42-0 win against South Rowan.

Rowan’s golf coach of the year Rhett Teems handles PA duties at East and provided entertainment worth the price of admission. He was at least as fired up as the Mustangs.

The stat sheet says the Mustangs can. They lead the eight area teams (six Rowan schools, plus Davie and A.L. Brown) in both offense and defense.

East has a small roster and has kill guys playing both ways.

Gabe Hinceman was a force on both sides of the ball on Friday and also found time to kick six PATs. Joe Plemmons caught a 14-yard pass from Logan Forbis and also recovered the fumble that led to East’s second TD.

Forbis didn’t have a big game Friday, as East didn’t have to throw very often. He did fire his fourth TD pass of the season to Hinceman. He leads the county in that department.

East is scheduled to play at East Chapel Hill, an unfamiliar opponent, on Friday.

East Chapel Hill had schedule openings because it didn’t field a varsity team at all  in 2017 due to a low turnout.

East Chapel Hill returned to the field this season  with great fanfare but was mauled by Carrboro last week. While East Rowan faces an unusually long road trip for a regular season game, it has a good chance to improve to 3-0.

East Chapel Hill junior Matthew Kupec, who is listed as a quarterback, receiver and cornerback, is the son of former UNC QB Matt Kupec, who starred for the Tar Heels from 1976-79. Kupec was MVP of the Liberty and Gator bowls.

Nothing went right for South (0-2) on either side of the ball in the lopsided loss to East Rowan. It was 14-0 after five minutes and only got worse. It was 35-0 at halftime and it became a running-clock game midway through the third quarter.

East was supposed to win, but no one on either sideline expected, 42-0. South had displayed promising offense in its first game against Carson, including 222 passing yards.

But South completed just two passes against the Mustangs, and both were behind the line of scrimmage.

After that train wreck, South’s open week comes at a perfect time

“We just didn’t have a good performance at all against East,” South coach Daniel Yow said. “Now we’ve got to regroup and get ready for our nine conference games.”

Bryson Bebber picked off a pass. Demarcus Blackwell managed 64 rushing yards, 47 in the first half, but there weren’t many holes for him after halftime. Blackwell also hauled a screen pass 22 yards for the Raiders’ lone positive pass play.

South will be at home on Sept. 7 against East Davidson when it returns to action. The Golden Eagles beat South, 49-21, last season.

The Cavaliers (1-1) dropped a tough one against West Rowan, 20-14, despite doing a lot of things right.

North didn’t turn it over, did a solid job against West’s running game and got another 100-yard effort from junior Malcolm Wilson, the county’s leading rusher with 43 carries for 279 yards.

North had some concerns about its kicking game, with four-year starter Jacob Young graduating.

But JD Weaver has come through, He turned in an excellent game on Friday.

Head coach Ben Hampton was pleased with an offensive line that went into the season with four new starters.

“Our o-line played well as a unit against West,” Hampton said. “We lost our starting center (Kendall Reid), but that group still didn’t miss a beat.”

Justin Hughes moved from right tackle to center to replace Reid, with Jaheem Marshall stepping in at right tackle.

North is taking on old rival Lexington tonight at 7 p.m. at Eagle Stadium in Spencer. The game was moved up due to weather concerns.

This is an endowment game, so only NCHSAA passes will be honored.

North has dropped 10 straight against West Rowan (the Cavaliers’ last win was in 2001) but still leads the all-time series 28-24-2.

North holds a 25-15 edge against Lexington and has beaten the Yellow Jackets in five straight meetings, including a miraculous 44-37 victory in 2017. Lexington’s last win over the Cavaliers came in 2010.

The loss to Carson handed the Hornets their first 0-2 start since the 2014 season.

Salisbury has scored two TDs in two games and is off to its shakiest offensive start since 2013 when it managed just nine points the first two weeks.

This is Salisbury’s open week. Next will be nine straight Central Carolina Conference games, starting with a road trip to take on an improved Thomasville team on Sept. 7.

Dating back to the 2017 season, Salisbury had held four straight teams under 100 passing yards, a rarity in a pass-happy era.

While TDs have been hard to come by, sophomore QB Mike McLean shows promise. He has 91 rushing yards and 210 passing yards to rank third in the county in total offense.

One of the more amazing stats in county football history is that West Rowan was 147-240-12 all-time when the late Scott Young was hired as  head coach prior to the 1998 season.

Nixon is 12-0 in county games as West’s head coach.

Back Jaden Perry turned in a solid game against North and surpassed 900 career rushing yards.

Receiver Davis Tadlock has been a pleasant surprise for the Falcons (1-1). He’s made seven catches and is third in the county with 105 receiving yards.

“He’s made a big leap, is really helping us out,” West QB Payne Stolsworth said.

Tadlock produced two huge catches against North, one on the sideline for a fourth-down conversion and one late in the game on which he got the ball inside the North 1 to set up the winning touchdown.

“He made a dive for the end zone and we really thought he got in,” Stolsworth said.

Nixon praised the Falcons’ secondary for their work against North.

“They did a really good job of keeping things in front of them,” Nixon said.

This is West’s open week. The Falcons took Monday off, but then went right back to work in the heat.

“We’ve been able to focus on us this week, instead of preparing for another team,” Stolsworth said. “We’ve gotten better.”

Davie’s 21-14 upset of North Davidson, a team that returned 11 defensive starters from a 13-2 team, required some virtuoso performances.

A real rarity, a three-pick outing, was turned in by Kristian Lyons, a running back whom the War Eagles have converted into a cornerback. Lyons clinched the win with an interception in the final minute.

Nate Hampton hit Jack Reynolds with three touchdown passes. Both are sophomores, so Davie is going to be throwing it around for a while.

He was sacked only once by a fierce defense, so the War Eagles’ offensive line did an amazing job.

Davie (1-1) plays a relentless schedule and takes on Mooresville on Friday. Davie leads the series 15-13-1 and won last year’s matchup with the Blue Devils, 34-13. Mooresville has had two weeks to prepare for Davie, since handling West Rowan on opening night.

The Wonders (1-1) suffered a rare shutout in a a 24-0 loss at Marvin Ridge on Friday. They’ve only been shut out three times in the last 15 seasons.

It wasn’t much consolation but rival Concord was shut out by Pine Forest. It was the first time the Wonders and Spiders had been shut out on the same night since 1976. Concord historian David Stancil researched that bit of information.

Offensively, there wasn’t much to shout about.

After two games, Jordan Medley has thrown for 305 yards, but only one TD.

As expected, 230-pound back Jaron Cooper has been hard to  handle. He’s rushed for 176 yards and averages almost 8 yards per carry.

While the Wonders are expected to win comfortably, it figures to be more entertaining than last season when the Wonders romped 50-0 over a depleted Carson squad.