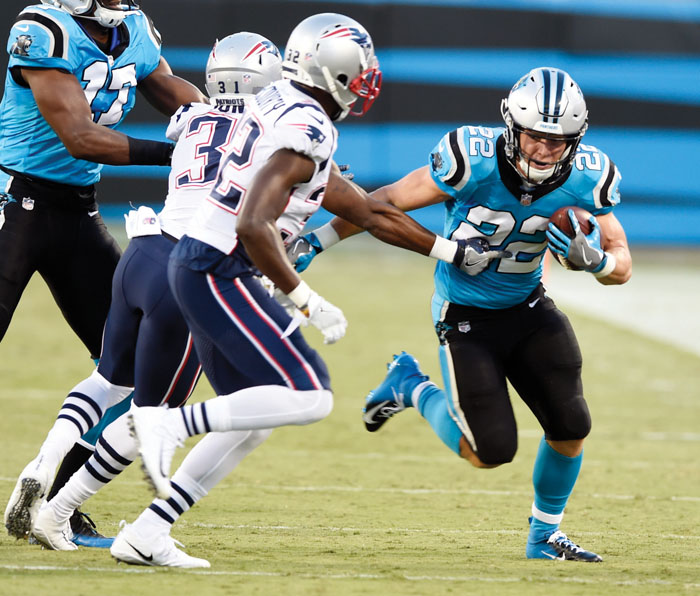 File- This Aug. 24, 2018, file photo shows Carolina Panthers' Christian McCaffrey (22) running as New England Patriots' Devin McCourty (32) defends during the first half of a preseason NFL football game in Charlotte, N.C. Coach Ron Rivera has made it clear McCaffrey will play a huge role for Carolina, saying that it would be “ideal” to get the second-year running back 25 to 30 touches per game. McCaffrey averaged less than half of that amount of touches last season and still managed 1,086 yards from scrimmage and seven total touchdowns, so there is a potential for him to have a big year. (AP Photo/Mike McCarn, File)

CHARLOTTE (AP) — Cam Newton is welcoming the idea of sharing the spotlight in Carolina.

Newton has been the focal point of the Panthers’ offense for the past seven seasons, but that’s about to change — at least to some degree.

Sure, Newton will still be running the show and remain a dual-threat QB, but coach Ron Rivera has made it clear Christian McCaffrey will play a much larger role this season, saying that it would be “ideal” to get the second-year running back 25 to 30 touches per game.

McCaffrey averaged less than half that amount of touches as a rookie and still managed 1,086 yards from scrimmage and seven total touchdowns, so there’s potential for him to have a big season.

Most of McCaffrey’s production came as a receiver in 2017, where he set a franchise rookie record with 80 receptions and five TD catches. But after releasing all-time leading rusher Jonathan Stewart, the Panthers are eager to feature McCaffrey more in the running game — similar to how new Panthers offensive coordinator Norv Turner used LaDainian Tomlinson in San Diego.

“I could see Christian, especially if he continues to develop the way we think he can, being a very integral part of what we want to do,” Rivera said.

And it’s all part of the overall design to take some of the pressure off Newton, who led the team in rushing as well as passing last season.

One of the reasons Turner was brought in was to find new and creative ways to get McCaffrey the ball, particularly in open space where he’s difficult to tackle because of his speed and shiftiness.

McCaffrey has been featured extensively in the preseason, touching the ball 10 times for 51 yards on Carolina’s opening 16-play drive against the New England Patriots in the third preseason game.

Here are some other things to know about the Panthers:

As for Newton, all eyes will be on how well he adapts to Turner’s offense.

Newton worked in a similar scheme with Turner understudy Rob Chudzinski early in his career, so there is some familiarity there.

Under Turner, Newton will be asked to look past his first and second options more often and take what the defense gives him, relying heavily on McCaffrey and new speedy receivers Jarius Wright, Torrey Smith and rookie D.J. Moore to make plays.

“That has to be my mentality,” Newton said. “We have a lot of guys who can take 2 yards and turn it into 20 yards, or more. But it starts with me and I have to trust those guys and get the ball to them.”

Rivera also wants to see Newton get back to doing the things that earned him the league MVP honor in 2015 and helped the Panthers reach the Super Bowl — spreading the ball around to his several different receivers.

He certainly has the options to do that with the additions at wide receiver and tight end Greg Olsen.

It is Shaq Thompson time in Carolina.

Thompson has been groomed for the past three seasons to take over for Thomas Davis at weakside linebacker. With Davis suspended four games to open the season for testing positive for a banned substance, Thompson gets his shot.

The Panthers will be counting on second-round pick Donte Jackson to step in and start right away at cornerback.

Jackson is not big, but he was one of the fastest players in college football last season. He still struggles at times taking the correct angle on tackles, but the Panthers love his swagger and playmaking ability.

Three starters on the offensive line went down with knee injuries during the preseason leaving the Panthers in a potentially precarious situation. Rivera said he’s not sure if 2017 All-Pro second-team right tackle Daryl Williams, left tackle Matt Kalil or left guard Amini Silatolu will be back on the field for Carolina’s Sept. 9 regular-season opener against Dallas.

CLEVELAND (AP) — Cleveland Browns linebacker Mychal Kendricks was released by the NFL team Wednesday night, hours after he was charged by federal prosecutors in Philadelphia with insider trading.

Kendricks, who signed a one-year contract with the Browns in June after winning a Super Bowl title last season with the Eagles, allegedly used tips from an acquaintance to make about $1.2 million in illegal profits on four major trading deals, federal prosecutors said.

The 27-year-old issued a statement earlier in the day admitting to his guilt and apologizing. He expressed regret and accepted “full responsibility” for his actions.

However, the Browns decided after learning more about the case that they couldn’t go forward with Kendricks, who was going to start for the team. The Browns issued a statement after traveling to Detroit for Thursday night’s exhibition finale against the Lions. Kendricks did not make the trip.

“Prior to signing Mychal, we were informed that there was a financial situation that he had been involved with in 2014,” Browns general manager John Dorsey said. “We were told Mychal had fully cooperated with investigators as a victim. From what was communicated at that time and based on the numerous questions we asked and further due diligence on our part, including checking with the league office, there was no information discovered that conveyed otherwise.

“Recently, we were provided an update on the matter and the circumstances have changed. We are now dealing with a different set of facts and the additional information we’ve gathered has led us to the decision to release Mychal from our team.”

Kendricks is facing possible prison time and further discipline from the NFL for violating its personal conduct policy.

Prosecutors allege his co-defendant, Damilare Sonoiki, was paid $10,000 in kickbacks in the scheme from 2014-2015, as well as perks like tickets to Eagles games and tagging along to a music video shoot or nightclub appearances, said U.S. Attorney William McSwain.

Sonoiki had been working as a junior analyst at an unnamed investment bank in New York, prosecutors said. An IMDB profile lists him as a former writer on the popular TV series “Black-ish” as well as other movies and TV shows.

In a statement released by his lawyer, Kendricks said he was sorry and takes full responsibility for his actions.

“While I didn’t fully understand all of the details of the illegal trades, I knew it was wrong, and I wholeheartedly regret my actions,” he said in the statement. He also claimed he didn’t take any of the profits for himself but didn’t elaborate on where the money went. I am committed to repaying all of the funds gained illegally and accept the consequences of my actions.”

Kendricks said he has been cooperating with authorities since the investigation began.

McSwain along with representatives from the FBI and the Securities Exchange Commission— which filed a separate complaint — said Kendricks and Sonoiki used coded language in messages to try to hide their actions. McSwain said Sonoiki, who had limited trading powers at the time, would gave non-public information to Kendricks about acquisitions and other deals that would affect the price of securities for at least four different companies.

Stephanie Avakian, co-director of the U.S. Securities and Exchange Commission’s Division of Enforcement, said in one message when Sonoiki was asking for payment, he told Kendricks that he liked Philadelphia bread used in cheesesteaks more than the bread in New York and asked that Kendricks bring him some.

They also had a conversation pretending to be talking about changing the number on Kendricks’ jersey to 80, meant to signify the amount of money that should be deposited into a new trading account, she said.

If the men are convicted, they could face up to 25 years in prison and a fine of up to $5.25 million as well as the seizure of any profits made from the insider trading.

The Browns signed Kendricks as a free agent, bringing him in to upgrade their linebacker corps following an 0-16 season. Kendricks spent six years with the Eagles, who drafted him in the second round in 2012 after he played at California.

The 5-foot-11, 240-pounder recorded a team-high eight tackles in last season’s NFC Championship against Minnesota and had four in Philadelphia’s Super Bowl win.