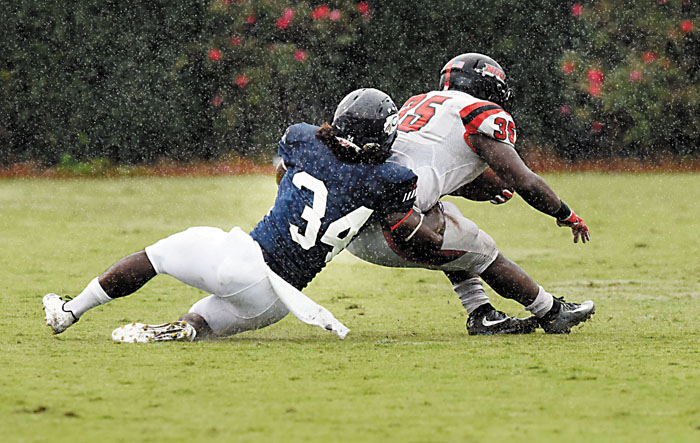 Carrolton, Ga., and the natural grass of University Stadium is where it all started at Catawba for linebacker Lamontico Mezzrow Melvin Jr., who fortunately answers to “L.J.”

Two years ago when Catawba played at the University of West Georgia, Melvin was making his debut as a true freshman. He met the return man on the second-half kickoff at the West Georgia 32. There was a collision that resulted in a fumble, and Melvin also had the presence of mind to make the recovery. That turnover led to Catawba’s only points in a 23-3 loss. Melvin will never forget it.

This time, as Catawba renews its struggle with the Wolves, Melvin will have a much larger role. He’s no longer that full-throttle kid recklessly flying around.  He still plays on the kickoff team, but he’s now the leader of a new linebacking corps that lost three of the best in school history — All-American Kyle Kitchens, Trey Evans and Michael Peppers. Catawba is committed to the 4-2-5 defense, so fewer linebackers (and more DBs) are needed. Melvin chairs the LB committee that includes North Rowan High product Eric Gibson, North Greenville transfer Jeremiah Ferguson and youngster Casey Hull.

“When we recruited L.J. (out of Fayetteville’s Jack Britt High), we brought him here with the idea that he would be filling some big shoes one day,” said Catawba head coach Curtis Walker, who is beginning his sixth season. “Throughout the preseason, he’s made us look like very good recruiters. He’s always been talented, the skill set has always been there, and now he’s playing like an athlete who has added knowledge and experience. We believe he’s going to make us proud of the linebacker position.”

Melvin’s uncle, exciting running back George Bell who transferred to Catawba from Virginia Tech during Chip Hester’s coaching tenure, paved the way for Melvin to come to Catawba.

“I’m excited about this season, and I know the team is relying on me,” Melvin said. “Those guys who were ahead of me last year, especially Trey Evans, I learned a lot from them, and now it’s time to show what I’ve learned.”

West Georgia, a contender in the high-powered Gulf South Conference, was 9-4 last year, which means it played two Division II playoff games. It won the first one, hammering Virginia State. The UWG offense was explosive a year ago, 31 points a game. The guys who did most of the exploding, quarterback Willie Candler (25 TD passes) and running back Devontae Jackson, are still in uniform, so Melvin and his teammates will have their work cut out.

Behind Melvin will be a DB crew that includes preseason All-South Atlantic Conference cornerback Cris Page. Jeremy Addison, a senior who has been a starter (when healthy) since his freshman year, is returning from a devastating ankle injury. He’ll be the “nickel.” He’ll make interceptions and he’s fearless and physical against the run. He made it back on the field for the Spring Game and says he feels 100 percent.

“Jeremy is the motor and the voice of the secondary,” Walker said. “He’ll get us lined up right.”

Caleb Allen is the other starting corner, with Chris Thompson and Mike Miller as the safeties. Trey Murray is experienced, and keep an eye on 6-foot-4 redshirt freshman Brenden Westbrook, the former Carson High whiz. Westbrook continues to progress as he makes the transition from high school cornerback to college safety.

On the defensive front, there’s a ton of experience, familiar names such as Jordan Hemingway, Ryan Watts, Cameron Davis and Omar Staley. Now add Josh “Smiles” Smith a transfer from The Citadel. Smith was recruited by Auburn as a running back a few years ago, which gives you an idea of the kind of athlete he is.

Hemingway and Staley were recognized as second team on the preseason All-SAC squad.  Walker has few concerns about this group. Former North Rowan High roadblock Steven Thurston, a redshirt freshman, is a second team tackle on the depth chart. Joshua Moses, the former East Rowan High standout who suffered a horrific injury on a kickoff last season, is back and is a second team defensive end.

Catawba’s kicking game should be a source of strength. Kicker Lee Brackman and punter Caleb Berry are All-SAC candidates. Brackman ended Monday’s practice by splitting the uprights  with a 52-yard field goal.

“We used to believe we needed to get to the 25 to try a field goal, but now if we can get to the 35, we know Brackman’s got a chance,”  Walker said.

Sophomore right guard Qua Harris and Austin Willmore, a 295-pound transfer from the junior college ranks in California, are the other starters.

“West Georgia will be great competition for us to start the season,” Norton said. “It will be good to find out early where we stand.”

Catawba’s base offense will include one back, three wideouts and a tight end. That back usually will be Kenyatta Greene, who figures to be one of the most explosive players in Division II. Greene averaged 6.3 yards per carry, 13.8 yards per reception and put the ball in the end zone 13 times to nip Brackman for team scoring honors.

Tight end Jourdan Osinskie joins Greene on the preseason All-SAC first team and provides a monstrous threat as a 6-foot-3, 230-pound athlete who can stretch the field. He had 30 catches last season and is a big play waiting to happen.

The top wideouts, Sam Mobley and Keyon West, are gone, so that’s going to be a green group except for Gavin Rose (18 receptions). Anthony Stanley, Devonte Tanksley and Will Sweeper are listed as the starters.

Throwing to them will be QB Reid Carlton, who is backed up by redshirt freshman Ken Avent III.

Carlton, who will turn 23 during the season, looks the part of a star at 6-3, 230, He appears indestructible, but he’s had no luck with health. He’s been at Catawba since 2014 and started most of the games in 2016. He was competing for the starting job with Patrick O’Brien in 2017 when he was injured in the second game at VMI. While he’s on track to graduate after this semester,  Carlton is still only a junior as far as eligibility. He endured a normal redshirt season, plus last year’s medical redshirt season.

“I’m healthy and ready to play some football,” Carlton said. “I’m one of the older guys now (along with Sands, Berry and Osinskie) and I want to provide some leadership.”

The Indians were still snubbed when it came time to set the regional playoff bracket. Gulf South Conference teams, including West Georgia, dominated that bracket and then proved their mettle in the playoffs, smashing SAC champ Wingate and the CIAA entries.

But it’s a new season. Catawba, which has been eager to punch someone since November, has a chance to make a statement right away at West Georgia.

Catawba beat West Georgia in a 2000 playoff game at Shuford Stadium, but the Wolves treated Catawba roughly in season openers in 2015 and 2016.

WSAT 1280 radio will bring the action back to Salisbury, along with WAXN Channel 64 on TV.

“We’re ready to get the ball rolling,” Carlton said.  “We’ve got a good team. It’s time to show it.”