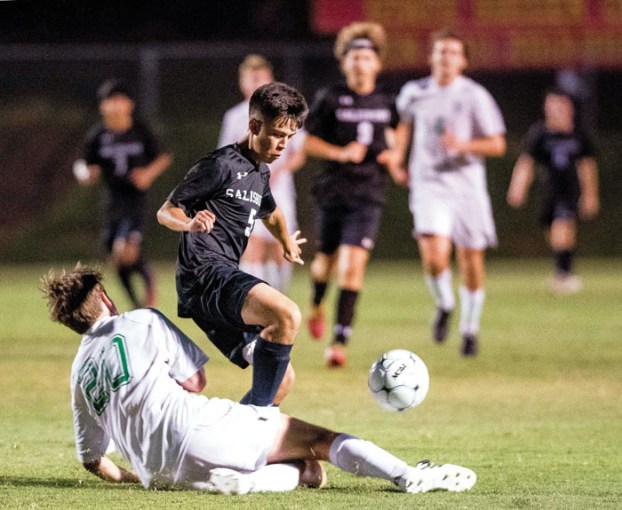 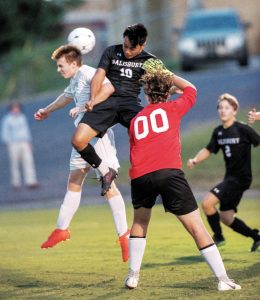 Then it went out and played that way.

“We were very angry,” eighth-year coach Matt Parrish explained, moments after the unbeaten Hornets rebounded from Monday’s subpar showing against Thomasville and gained a 3-1 CCC victory. “We were so far off track on Monday, as far as sticking to our game plan and playing with cohesiveness. I was so angry, I had to take a walk. Then tonight we had a near-perfect first half — and I don’t think I’ve ever been that pleased with a first half. The two were like polar opposites.”

Salisbury (6-0, 2-0) — still smarting from its 3-2 triumph just 48 hours earlier — responded with an 80-minute lecture on soccer passion. The Hornets were inspired from the start, peppering 13 shots at West Davidson’s net in the first half and 21 altogether.

“Against Thomasville, we had to squeeze it out,” senior defender Jack Fisher said. “Tonight was about learning from our mistakes, righting our wrongs from last season. We came back from (Monday’s match) and played a more-tactical game, midfield-wise. We started connecting balls everywhere.”

It started in the 22nd minute, when Fisher lofted a 20-yard throw-in from the left side that junior Hugo Trujillo caught on the fly and headed past West keeper Sebastian Horn for the game’s first goal.

“I felt the keeper come out and saw the ball go over him,” Trujillo said after netting his second goal of the season. “Right then, I pretty much knew it was my goal.”

West coach Joe Patterson felt the Dragons (2-4-1, 0-2) weren’t tight enough on defense. “They had a lot of opportunities on set pieces — throw-ins, free kicks,” he said. “And they’re very good at them. If you keep giving them chances, they’re gonna hit one or two.”

This time, Parrish stuck around for all of it.

“This was the first time that we executed a game plan,” he said. “And we looked great doing it. In the first half, we were dynamite. Were knocking the ball around and were absolutely stellar.”

Only 2:33 remained in the first half when Salisbury extended its lead to 2-0. Freshman Brayan “Pollo”Avilez advanced the ball down the right side and fought off a West defender before centering a pass to reserve forward Tony Figueroa, who ripped a 10-yard shot through a screen and into the net. It was the first goal of the year for Figueroa, a money-in-the-bank finisher who’d been limited to five minutes of play this year due to an injury.

“Tony’s one of the best shooters we have,” said midfielder Luke Holland. “That might have been the first shot he’s taken.”

It was actually the second, according to the coaching staff. Parrish was simply pleased to have Figueroa available. “Last year he scored four goals in our first game at East (Rowan),” he said. “He was our leading scorer but hasn’t been able to play, which is why we’re still looking for an identity. Everything filters down to newness, newness and newness.”

Holland, one of the team’s established staples, put everyone at ease when he converted another towering throw-in by Fisher for Salisbury’s third goal. With Fisher eyeing the field from the left side, Holland charged toward the cage and headed a 10-yarder past Horn. Another set piece, one drawn up by assistant coach Taylor Strode at halftime.

“He found some space for me and Jack put the ball right there,” said Holland, now a seven-goal scorer. “That’s pretty good when you can execute a play the first time you try it.”

Holland, who doubles as a safety for the SHS football team, came out of the game two minutes before West scored its goal. Senior midfielder Hugh Bennett used a bicycle kick to push a shot past Salisbury keeper Josh Faulkner with 19:07 remaining.

“We’re a work in progress,” said Parrish, who led the Hornets to a 1-5-1 start and a fourth-place finish in the CCC last year. “If we can go from 1-5-1 to 6-0 or 4-2, we’re not in fourth place at the end of the year. Maybe we even get a home playoff game. If we continue to play in this fashion, we can be successful going forward.”

NOTES: Salisbury plays a non-league match tonight against North Iredell at Ludwig Stadium. … This was Parrish’s 149th career victory as a Salisbury boys coach. His girls teams have won 227.

Prep Volleyball: West off to 7-0 start