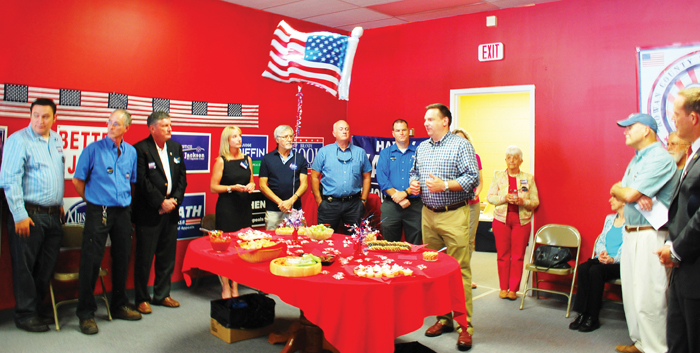 SALISBURY — U.S. Reps. Richard Hudson and Ted Budd spoke to supporters and volunteers and promised to continue working for Rowan County at the opening of the local Republican Party headquarters on Tuesday afternoon.

Hudson stressed how important supporters were in the 2016 election and the importance they will have in the November election.

Because Budd and Hudson each represents parts of Rowan County, they said it is important that they work together.

“This is a county that both Richard Hudson and I share,” said Budd, who represents the 13th District. “It’s important for people to make sure they know we are their representatives, depending on what street they live on. We’re honored to serve Rowan County.”

The two spoke about their continued focus on economic development and finding a solution to the opioid crisis. Budd talked about a conversation with a Rowan County business owner who was looking to hire workers but was struggling because applicants couldn’t pass a drug test.

“One of the challenges is to get people to pass a drug test,” he said. “We know we’ve had problems right here in Rowan County with stuff that devastates not just the economy, but it devastates our families and it devastates our friendships, and we’ve been to way too many funerals because of the opioids crisis.”

Budd, who is a member of the Financial Services Committee, said his re-election and the House remaining majority Republican is important for Rowan County’s economy.

“When I look over my shoulder, I have to make sure I don’t lose my seat, we don’t lose the House of Representatives,” Budd said. “I see other people in other parts of the country that their policies would destroy the momentum that we have in Rowan County. For instance, if we lose the House, the gavel would go to Maxine Waters. I do not think she has Rowan County’s best interests in mind, where I do.”

Hudson spoke about the importance of supporting the military and veterans. The 8th District stretches east to Fayetteville, home to Fort Bragg. He said he concentrates on being connected to the community to address each area’s concerns.

“I represent seven counties,” Hudson said. “They’re all very different, but they’re all very similar in some ways — a lot of common issues of concern, opioids being one. Economic development is a concern in some communities, like here.”

Hudson and Budd plan to spend the next couple of months working on voter engagement by knocking on doors, calling and taking part in volunteer events.

“There is no governor’s race,” Hudson said. “There is no Senate race. We’re the top of the ticket. Ted and I know that, and we’re taking that responsibility hard. We’re going to work with you to make sure we turn out our voters and get the message out there.”

The fall election may be affected by a federal court ruling on Monday that North Carolina’s congressional district map is unlawfully drawn to favor Republicans. The judges said they may direct the General Assembly to redraw the maps by mid-September, possibly delaying the November election.

As the Greensboro-based court decides how to proceed, Hudson and Budd said they are staying on the campaign trail. Budd and Mark Harris, who is running for Congress from the 9th District, will be joined by President Donald Trump at a luncheon at Carmel Country Club in Charlotte on Friday.

The Rowan County Republican headquarters is at 704-B Jake Alexander Blvd.