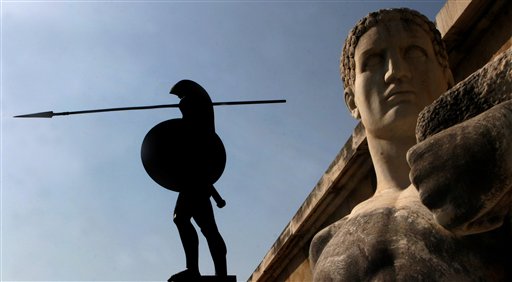 The bronze statue of Spartan King Leonidas, left, is seen at Thermopylae, which lies about 200 kilometers (125 miles) north of Athens marking the site where according to legend 300 Spartans held off hundreds of thousands of invading Persians in 480 BC. (AP Photo/Dimitri Messiniss)

“Go tell the Spartans, stranger passing by, that here obedient to their laws we lie.”

This immortal quote, attributed to the poet Simonides, is perhaps the most well-known and oft cited martial axiom in existence. Why? Because it captures the essence of selfless sacrifice against impossible odds, which is an idea that many people find compelling even today. As a graduate student at UNCC, I visited the site in Greece where the Battle of Thermopylae occurred, and it was there that my professor described the battle and interpreted the inscription (which was in Greek). Upon realizing what the poet was getting at, I was nearly moved to tears.

“Why tears?” you ask. Because along with being a student and now teacher of history, I have spent most of my life engaged in military service. Joining the Air Force in 1986, I spent decades preparing for and, on occasion, experiencing war from deployed and home station standpoints. Stories of suffering, sacrifice and death on the battlefield affect me on a highly personal level, and when I decided to attend college, it was only natural that I would be drawn to the study of military history.

Given that background, the Simonides quote was always going to resonate, and I am happy to report that I never tire of considering its meaning and discussing it with other people whenever I can.

Speaking of resonance, I must admit to being dismayed by and, yes, somewhat angered by the ongoing controversy over Confederate monuments, which culminated in the attack on the Silent Sam statue in Chapel Hill. While it serves no purpose to regurgitate arguments both for and against this particular statue, I will say that after considerable research into the matter (including visits to similar monuments across the Southeast), I discovered that people who wish to topple them are at best misguided, and at worst blatantly dishonest and irritatingly political in their motivations.

The question looms large: what are Confederate monuments, and what do they signify? Without getting too deep into the psychological weeds of why people erect monuments in the first place, these examples, which number in the hundreds and even thousands across the United States (yes, there are examples in Northern states), are essentially calls for the remembrance of soldiers who died in battle; often heroically and against impossible odds. Most Confederate monuments say as much on the associated inscriptions, which are in many cases poetically profound. In their way, they all say essentially the same thing: “Remember us.” “Remember us.”

My personal favorite is from the monument in Stanly County:

“THE TUMULT AND THE SHOUTING DIES.

THE CAPTAINS AND THE KINGS DEPART.

LORD GOD OF HOSTS BE WITH US YET.

In spite of mounds of explicit physical evidence such as this, some people persist in claiming that these monuments actually resulted from conscious (and sometimes subconscious) desires of disaffected whites to mark their territory and reestablish supremacy following the Civil War. Such people would do well to look into the history of military monuments the world over, and ask if anything that took place in the South (which had been bled white during the war) differed remarkably from examples elsewhere. Families and friends of soldiers who die in battle always want to honor — and especially remember — the fallen: much in the manner of Simonides those millennia ago.

In these politically charged times, all of us would do well to remember that some things transcend our pettiness, desires and momentary tics. A need to remember soldiers who die in battle is one of those things, and if we decide that doing so is no longer appropriate, culturally sensitive or politically expedient, we certainly have cause to question if, and to what extent, the word “civilized” still applies to us.

Kevin L. Wilson is a soon-to-be retired Air Force veteran and Adjunct Instructor of History and Humanities at Rowan-Cabarrus Community College. He lives in China Grove.