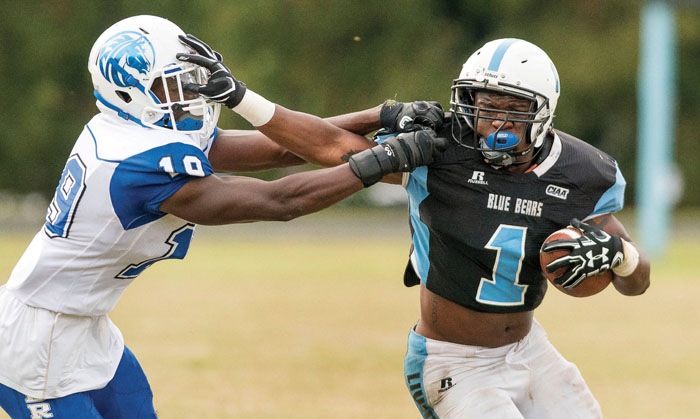 SALISBURY — Livingstone’s football team is traveling to Pikeville, Ky., in search of its first win since 2016.

After a winless 2017 campaign, the Blue Bears open the season on Thursday night, taking on another group of Bears at Howard Field. Kickoff is slated for 7 p.m.

Pikeville, an NAIA school in the Mid-South Conference, is already game-ready, having played its opener last Thursday at home against Keiser University, a first-year program in West Palm Beach, Fla. Keiser made the trip to Pikeville and beat the Bears in overtime, 24-17.

“I feel much better than I did at this point last year,” said Livingstone head coach Daryl Williams, back for his sixth season at the helm. “We’re ready to go up there and get a look at Pikeville, who lost a heart-breaker last week.”

Williams announced that true freshman Miles Hayes, a 6-1, 205-pounder, from Doral Academy in Port Charlotte, Fla., will start at quarterback for the Blue Bears. “He plays smart,” Williams said, of Hayes. “He has a decent arm and runs when he has to. He comes from an excellent high school program.”

Xavier Longerbeam, who started at quarterback the majority of the time in 2016 and 2017, also returns and could see action, as could former local star, Alexis Archie. Longerbeam is a redshirt junior from Panama City, Fla., who battled injuries last year and threw for just 668 yards and two TDs.

Another former local player, Justin Ruffin, who was outstanding at Salisbury High School, returns for his second season as a starting running back. Now a junior, Ruffin transferred from Applachian State in 2016 and had 438 yards rushing and two TDs last season for Livingstone.

Williams believes Ransom is poised for a big season at receiver. A senior and reigning “Mr. Livingstone,” Ransom, 6-2, 195-pounds, led the team with 34 catches last season for 428 yards and three scores.

Four-year starter Armond Cox returns to anchor the Livingstone defense, once again coordinated by Rodney Hughey (sixth year). A 6-3, 250-pound defensive tackle from Teaneck, N.J., Cox led the team with 54 tackles (12 for losses) in 2017 and has earned All-CIAA honors in some previous seasons.

Joining Cox on the defensive line are William Moore and DeAndre Moore, both 300-pounders, though not related. Anthony Mullis, son of Livingstone Hall of Famer Ben Coates, should also see action on the DL after transferring from Elon.

The Blue Bears will have some experience at linebacker — seniors Zachary Kupka and Raymond Basurto, along with junior Raheem Coxfield, a transfer from Savannah State.

The defensive backs are led by returning starter Gregory Hines, a senior cornerback, who has also returned kicks during his career. Joining Hines are Darrell Mathis, and safeties Dominic Alexander and Walter Watkins. Hines and Watkins each had two interceptions last year.

Williams, who serves as his own offensive coordinator, said his team has is ready to go.

“We came to camp earlier this year and those extra practices, I feel, will help us in this first game,” added Williams. “We’re healthy and the kids have really bought into what we’re trying to do. We just haven’t seen the blown assignments and turnovers in practices that we have seen in the past. And that kind of thing has a way of carrying over into the games.”