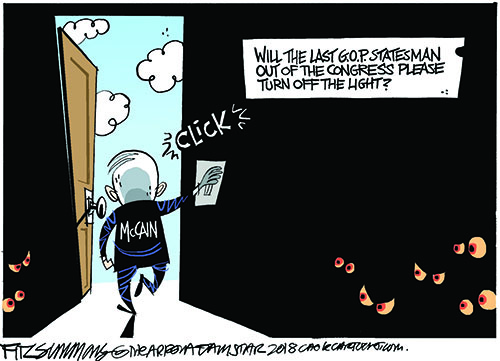 From the Vietnam combat of the Lyndon B. Johnson years to the political wars of the Donald J. Trump era, John S. McCain III — grandson, son and father of naval officers, Hanoi prisoner of war, lion of Capitol Hill, presidential nominee, keeper of the American flame and defender of the American faith — was at the center of the nation’s life.

And when he died Saturday at age 81, the country lost both a conservative and a radical, a public servant who was the servant of no discernible ideology, a principal of both the warrior class and the political class — and a pugnacious pugilist with the fiery temper of Ty Cobb (whom the journalist Bugs Baer once wrote would climb a mountain to punch an echo) and the iconoclastic temperament of Thomas Paine (who was both philosopher and revolutionary).

Fifth from the bottom of his class at Annapolis, McCain rose in the Navy and eventually in the nation’s estimation, and his route from solitary confinement to confinement for glioblastoma brain tumors, with stops along the way as reformer (on campaign finance) and rebel (against President Trump), is a peculiarly post-World War II story.

It was, to be sure, less a Horatio Alger tale of heroic striving than a heroic Horatio Hornblower tale of the naval arts. It was not an up-from-obscurity tale like that of his 2008 rival, Barack Obama, for the 44th president was a black man reared in Indonesia and Hawaii while McCain was descended from two admirals. But it was a comeback story nonetheless, for McCain was a serial recoverer, from near failure at the Naval Academy, from Vietnam captivity, from the Keating Five finance scandal, from repeated health challenges, and from defeat in the most visible, visceral competition in American life.

The sad coda to John McCain’s remarkable life was a remarkable Long Goodbye, first taking form in casting a thumbs-down vote that stopped the repeal of the health care plan that bears the name of his presidential-election rival; defying his party’s president and many of his Arizona constituents by disapproving of stern immigration restrictions, especially those aimed at the young Dreamers; calling on Trump to gain an “appreciation for the importance of our values to our security, and (to understand) that simple human decency is as essential to the souls of nations as it is to the souls of people”; and finally, this spring, opposing as a onetime victim of torture the confirmation of a CIA chief who was a onetime prosecutor of torture.

Then he published a 380-page Farewell Address bearing the title “The Restless Wave” and carrying an evocative subtitle that was a nine-word epitaph on a life fiercely lived: “Good Times, Just Causes, Great Fights and Other Appreciations.”

His reward in the days after his demise — a death not surprising but shocking nevertheless — will be to be recognized as one of the signature characters of his time, one of the signal spokesmen for the causes of campaign-finance reform and human rights, one of the great fighters of his era and, as this and scores of other pieces in news outlets across the country demonstrate, the subject of hurriedly crafted journalistic appreciations.

There was, to be sure, a touch of romance to McCain’s life, a romance rooted in his recovery from solitary confinement; in his stint as naval liaison to the Senate, a post his father once held and that introduced the young McCain to many of the lawmakers he eventually would join; in his early years in the House, where he stood out and stood fast; and in his time in the Senate, where his unpredictability was unappreciated by Republican leaders but embraced by Democrats and the press — two groups he would refer to, ruefully but not fully untruthfully, as his base.

Sen. John F. Kerry, the 2004 Democratic presidential nominee, considered his fellow Vietnam veteran as his running mate, just as McCain, when he won the GOP nomination four years later, considered Democratic Sen. Joseph I. Lieberman. Neither deal was consummated, but McCain, in “The Restless Wave,” regretted to the end that he let his advisers talk him out of selecting Lieberman and into inviting Gov. Sarah Palin onto the ticket.

“It was sound advice that I could reason for myself,” he wrote. “But my gut told me to ignore it, and I wish I had.”

The tragedy of McCain’s life may not be his wartime incarceration nor his repeated battles with cancer. It may be, instead, that his worldview, and his view of America’s role in the world — utterly conventional midcentury notions of national purpose melded with patriotism, the unremarkable cliches of American Legion beef-and-beer nights and of Rotary chicken barbecues — should have become remarkable statements of American identity and idealism.

Take this statement from his book:

“The moral values and integrity of our nation, and the long, difficult, fraught history of our efforts to uphold them at home and abroad, are the test of every American generation. Will we act in this world with respect for our founding conviction that all people have equal dignity in the eyes of God and should be accorded the same respect by the laws and governments of men? That is the most important question history ever asks of us. Answering in the affirmative by our actions is the highest form of patriotism, and we cannot do that without access to the truth.”

In another era, a passage like that would be considered colorless patriotic boilerplate rhetoric, the sort of Decoration Day pieties delivered by rote by House members home on congressional recess. In our era, it is a clarion call to turn to our better angels and to return to our founding values.

It was McCain’s role to remind us of that, and it was his resolve to continue, even in life-threatening circumstances, to repeat his call to arms, to dedicate himself to what he called, in his book, “something more profound and dearer than a politician’s campaign slogan.”

The best way to honor him and mark his death may be to give life to that passage, to remember that the man who hurled challenges like that paid a great price and emerged from his greatest test with the greatest faith, and with a selflessness that was invigorating to him and inspiring to his country.