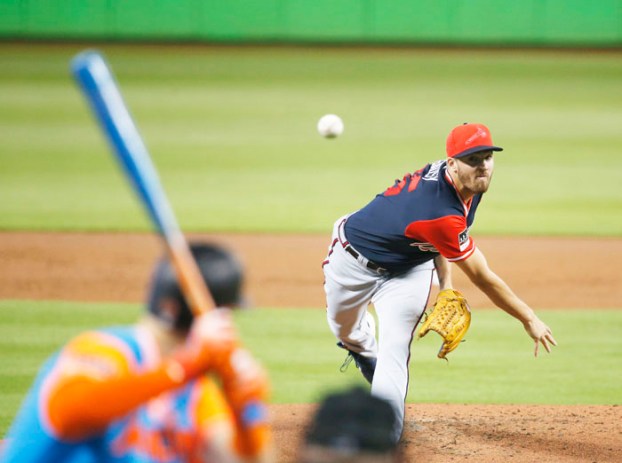 Atlanta Braves' Kevin Gausman delivers a pitch during the first inning of a baseball game against the Miami Marlins, Sunday, Aug. 26, 2018, in Miami. (AP Photo/Wilfredo Lee)

MIAMI (AP) — Nursing a lead in the game and in the NL East standings, the Atlanta Braves monitored the out-of-town scoreboard as they finished off the Miami Marlins.
“Absolutely,” manager Brian Snitker said. “We’ve been waiting four years to do this, check the out-of-town. So it’s nice.”
Although it has been awhile since Atlanta contended for the postseason, this year’s team shows no signs of fading. Kevin Gausman and four relievers combined on a two-hitter Sunday and the Braves won despite an ongoing offensive slump, 4-0.
Atlanta headed home after a 5-2 trip with a three-game lead over second-place Philadelphia, which notched a simultaneous win at Toronto.
The Braves earned a split at Miami even though they scored just seven earned runs in the four-game series.
“It’s nice to work it out that way,” catcher Tyler Flowers said. “If you’re going to struggle offensively, you hope that’s the time your pitching is on top of everything. We’ve kind of been able to do it that way.”
Gausman (4-1) threw 80 pitches in five innings before departing for a pinch hitter with the score 1-0.
“It looked like he had everything going,” Snitker said. “It was a shame we didn’t score many runs. It looked like he would have probably finished the game.”
Gausman won his fourth start in a row and has an ERA of 1.69 in five outings since Braves acquired him from the Baltimore Orioles on July 31.
“I’m feeling comfortable with everything I’m doing right now,” Gausman said.
Braves starters compiled an ERA of 0.63 for the week.
The Marlins’ first hit was a third-inning single by pitcher Pablo Lopez, and Derek Dietrich singled with two out in the ninth.
“Pitching was good,” manager Don Mattingly said. “We just weren’t able to get anything going offensively.”
It was a familiar refrain. Miami managed four runs and 16 hits in the series.
Atlanta wasn’t much more productive, totaling one run in a 27-inning stretch before scoring in the sixth against Lopez (2-4). Nick Markakis led off with a walk, advanced on a groundout and scored on a two-out single by Flowers .
The Braves added three unearned runs in the eighth. Two scored when first baseman Dietrich made an errant throw home after fielding a grounder with the bases loaded.
“He made the right play,” Mattingly said. “It’s not an easy play. He has to go to his left and throw back across his body. But it’s a play I think he’s capable of making.”
Atlanta went 1 for 11 with runners in scoring position and finished the week 5 for 47 (.106) in those situations. Freddie Freeman went 0 for 5 and finished 2 for 15 in the series, dropping his average to .313.
Ronald Acuna Jr. had two hits and made a diving catch in left field to rob Starlin Castro of a hit. Flowers added two hits for the Braves, who finished 14-5 against last-place Miami this year.

Before the game the Braves recalled INF Rio Ruiz from Triple-A Gwinnett and designated C Chris Stewart for assignment. Ruiz pinch-hit and walked in the sixth inning.

Braves: On Monday, the Braves have their first day off since Aug. 6. “Needless to say, Monday will be welcome,” Snitker said. Atlanta returns home to start a two-game series against Tampa Bay, with RHP Julio Teheran (9-7, 4.09) scheduled to pitch Tuesday.
Marlins: Following an off day, Miami begins a two-game series at the Red Sox on Tuesday, when RHP Jose Urena (4-12, 4.50) is scheduled to pitch. Urena will return from a six-game MLB suspension for hitting Acuna.

EAST RUTHERFORD, N.J. (AP) — Jonathan Stewart has been involved in 11 training camps during his NFL career, so the... read more