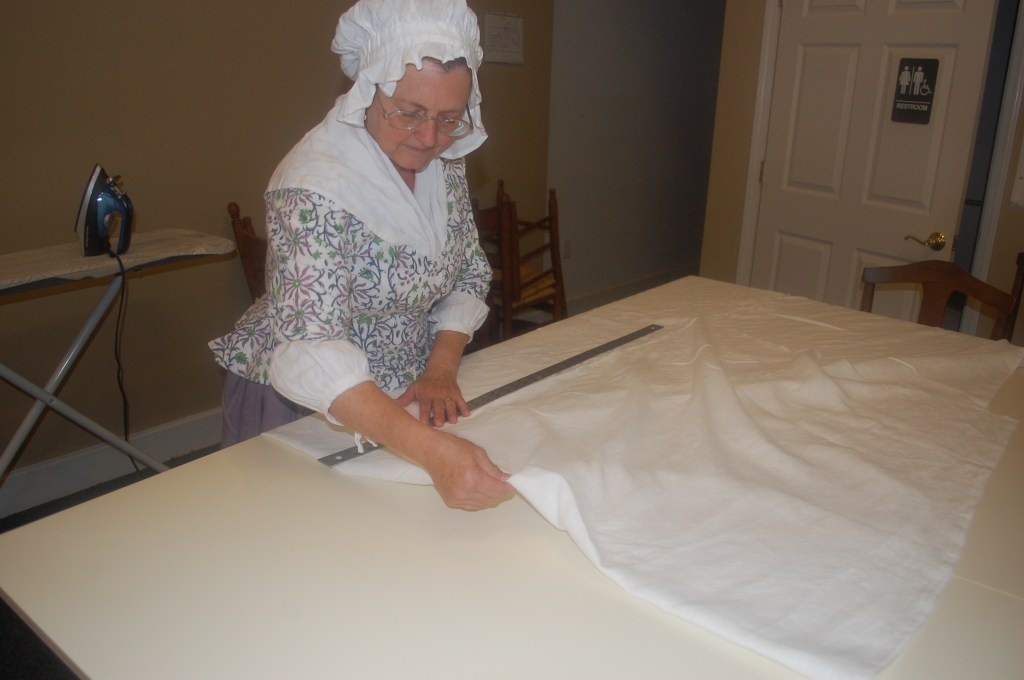 Janet Pyatt, the owner of The Backcountry Peddler, begins working on a custom order. She opened a living history mercantile store on Aug. 21.

SALISBURY — Janet Pyatt hopes to bring a blast from the past with her living history mercantile store, The Backcountry Peddler that opened on Main Street Tuesday.

History fans and historical reenactors can browse through clothes, books, toys and more from the Revolutionary War to the Civil War eras.

“I’m serving the general public — that section of the general public who happens to be interested in history and the more hardcore of that public that spends hours, time and money on historical reenacting as a hobby,” Pyatt said.

“This will be a great resource for the community,” Kaye Brown Hirst, the former executive director of Rowan Museum. “We’re at the crossroads of history where it all began in the back country.”

Pyatt began delving into the business world in 2008 with a home-based business named Pyatt’s Herbs and More. She soon moved to historical products after selling herbs at a farmer’s market and seeing a potential. She soon began going to historical reenactments and historic site festivals in Virginia and the Carolinas. The amount of festivals and inventory she had began to become overwhelming, so she decided it was time to open up a more permanent shop.

“The past few years I’ve done about 25 weekend events a year and it’s getting to be a little much, so I wanted to cut back on the weekend events and open this store,” Pyatt said. Also, my inventory kept growing and my tent is only 15 by 15 feet, and that’s about as much tent as I care to handle by myself.”

With a store, Pyatt already sees the advantages, like being able to showcase the various eras.

“Being in this building every day also allows me to have more than one period merchandise out at a time,” Pyatt said. “You go to a Revolutionary War event, you only put out your Revolutionary War material. You go to a Civil War event, you only put out what pertains to that time period, but here I can have any time period out every day if I want to.”

Pyatt admits she wasn’t always fascinated with history, but after visiting the backcountry section at the Schiele Museum in Gastonia, she became hooked after participating in sheep shearing. She soon began volunteering as a historical interpreter.

“I had this inkling, this realization of this is how my family lived,” she said. “I happened to know that my genealogy goes back to German immigrants in the 1750s to this area. Something clicked and I said yes this is how they lived. This is part of me. I was hooked from then on. Now that’s a common story that you’ll find among historical reenactors.”

Pyatt said she has put in a lot of effort to ensure the her inventory is historically accurate. She said she reads a lot — anything from history books to first-person accounts, looks at photos or painting and studies what other living history mercantile have.

Pyatt said understanding the way our ancestors live can give us clues of why we do things a certain way.

“Our history is with us,” she said. “Our ancestors are wth us whether we are aware of it or not. The way they live has something to do with the way that we live.”

The Backcountry Peddler is located at 123 N. Main Street and is open Tuesday-Saturday. For more information, visit www.thebackcountrypeddler.com or call 704-231-6588.

Answering an SOS on a coconut, he saved JFK:…