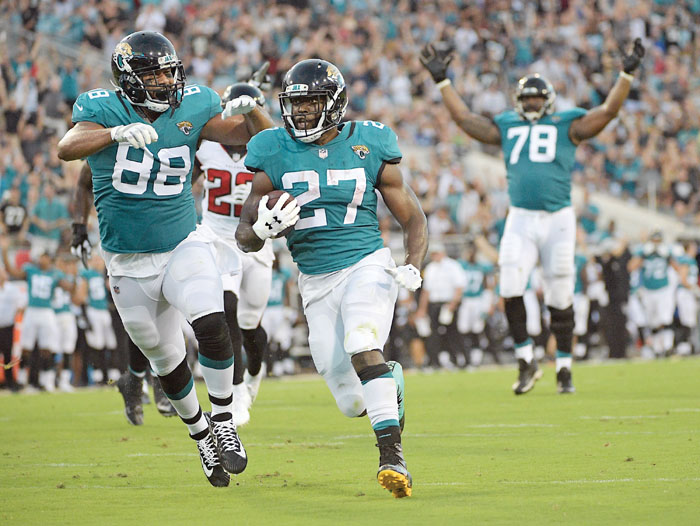 Jacksonville Jaguars running back Leonard Fournette (27) runs for a 21-yard touchdown against the Atlanta Falcons, next to tight end Austin Seferian-Jenkins (88), as offensive tackle Jermey Parnell (78) signals the score during the first half of an NFL preseason football game Saturday, Aug. 25, 2018, in Jacksonville, Fla. (AP Photo/Phelan M. Ebenhack)

JACKSONVILLE, Fla. (AP) — The Jacksonville Jaguars might have lost their No. 1 receiver for the season.

Marqise Lee, who led the team in receptions in 2017, injured his left knee in a 17-6 victory against Atlanta in the preseason Saturday night and could be out for the year.

Lee was carted off the field in the first quarter after Falcons cornerback Damontae Kazee twisted his leg making a tackle. Lee fumbled on the play, but it was overturned because Kazee was flagged for tackling with his helmet.

Teammates and coaches offered well-wishes to Lee as he left the field. Nonetheless, it was the kind of preseason injury that leaves players, coaches and fans shaking their heads.

Lee had 56 catches for 702 yards and three touchdowns last season. He signed a four-year, $34 million contract in March that included $16.5 million guaranteed.

A second-round draft pick from USC in 2014, Lee has 171 catches for 2,166 yards and eight touchdowns. He missed games because of various injuries in three of his four seasons.

CHICAGO (AP) — Bears coach Matt Nagy decided to rest starters for the next-to-last preseason game rather than use it as the customary regular-season tuneup.

And the backups proved that they’re also ready for the regular season as Chase Daniel directed touchdown drives on the first three possessions.

The Bears played in the Hall of Fame Game and have been practicing since July 20, and Nagy liked what he’d seen from the starters in practices. So he decided Friday to keep starters out of what normally would be a dress rehearsal for the regular-season opener at Green Bay.

Daniel replaced Mitchell Trubisky against his mentor, Andy Reid, and the Chiefs, the team Nagy last year served as the offensive coordinator.

Although the Rams rested 10 presumptive offensive starters for the third straight preseason game, the Los Angeles defense’s three big offseason acquisitions played at the Coliseum. Ndamukong Suh and cornerbacks Marcus Peters and Aqib Talib got some action early in the first quarter before sitting.

PITTSBURGH (AP) — Ben Roethlisberger made the most of his brief preseason cameo, throwing for 114 yards and a touchdown.

New Pittsburgh offensive coordinator Randy Fichtner didn’t let Roethlisberger’s lone scheduled exhibition appearance ahead of the Sept. 9 season opener at Cleveland go to waste. Roethlisberger completed 11 of 18 passes during his three drives, including a 32-yard rainbow to Justin Hunter for a score late in the first quarter.

Titans quarterback Marcus Mariota, meanwhile, struggled against Pittsburgh’s starting defense. Mariota completed 5 of 8 passes for 43 yards while playing most of the first half. He missed a wide-open Corey Davis for what would have been a long touchdown on Tennessee’s opening drive and his afternoon ended late in the second quarter when Steelers rookie safety Terrell Edmunds picked off a floater intended for Taywan Taylor.

INDIANAPOLIS (AP) — Andrew Luck threw a touchdown pass on what will probably be his last preseason drive, and Christine Michael scored on a 1-yard plunge late in the third quarter.

Luck looked much sharper than he did in Monday night’s loss to Baltimore. He wound up 8 of 10 with 90 yards and produced the only TD in the first half. He also had four carries for 27 yards before leaving midway through the second quarter.

Otherwise, it was a struggle for the Colts. They had trouble establishing the run — and stopping the run, too.

Jackson entered the game at the start of the second half and had his best performance yet for the Ravens. He went 7 for 10 for 98 yards and a touchdown, and ran for 39 yards on three carries, including a 19-yard scoring run.

Kenyan Drake sparked one scoring drive with a 30-yard run and another with a 36-yard reception for the Dolphins, whose starters reached the end zone for the first time this preseason.

Ryan Tannehill fumbled twice early, and the Dolphins drew boos from the small crowd when they went three-and-out on the first series. But the offense began to click in the second quarter against a mix of Ravens starters and reserves, and Tannehill finished 11 of 16 for 115 yards.

Danny Amendola made a nifty cutback to juke past two defensive backs and score on a 16-yard pass from Tannehill. It was the first touchdown by Miami’s starters during the preseason in 10 possessions.

On the next series, Tannehill hit Drake deep for a big gain to set up a field goal, and the Dolphins led 10-3 at halftime before both teams emptied their benches.

Saints quarterback Drew Brees was 7 of 9 for 59 yards with an interception in three series, while Philip Rivers was 5 of 7 for 29 yards in a brief tuneup appearance for the Chargers.

New Orleans did not get its initial first down until late in the first quarter when third-string quarterback and special teams contributor Taysom Hill moved the chains by running a direct snap on a fake punt around the left side. That helped set up Kamara’s short touchdown plunge seven plays later. The Saints took an 8-7 lead on a 2-point pass from Brees to Michael Thomas, the last throw Brees would make before giving way to Tom Savage.

Wil Lutz kicked field goals of 25 and 35 yards in the final two minutes of the first half, and Hill scrambled for an 11-yard touchdown run and a 2-point conversion on a keeper late in the third quarter. Cornerback Marcus Williams added a 59-yard interception return for a touchdown, which came seven plays after a pass interference penalty against Williams negated a ricochet TD return by linebacker Craig Robertson.