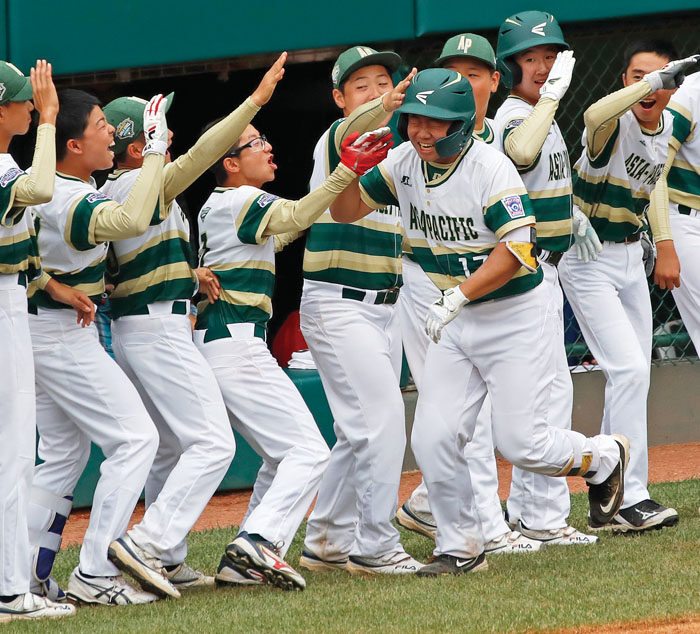 SOUTH WILLIAMSPORT, Pa. (AP) — After striking out his 15th batter to end the game, Hawaii’s Aukai Kea pumped his fists and let out a shout for all to hear.

Within seconds, Kea’s teammates sprinted to the pitcher’s mound to congratulate their team’s ace, hugging and pounding on him. Hawaii shut out Georgia 3-0 and Kea’s complete game sealed its berth in the Little League World Series championship.

About 60 feet away, the Hawaii faithful chanted “Hon-o-lulu!” in the stands over the first base dugout. As his home state deals with record rainfall from Tropical Storm Lane 4,000 miles away from South Williamsport, Kea took full note of the fans’ energy.

The U.S champions will take on South Korea in the tournament championship Sunday.

Even though Georgia never advanced a runner past first base, the game was scoreless until the bottom of the fourth inning, when a pair of pinch hitters provided the spark that Hawaii needed.

With two outs, Hunter Nishina hustled to turn an ordinary bloop hit to shallow left field into a double. One batter later, John De la Cruz picked up his first hit of the tournament, breaking the deadlock by knocking a single to right center.

“We always talk about how it’s ‘We over Me,’ and he did what we needed to score a run,” catcher Bruce Boucher said, referencing the slogan that appeared on the back of the Honolulu team’s jerseys during its run to South Williamsport.

Hawaii used another two-out rally to add the game’s final two runs in the fifth, on an RBI triple from Boucher, followed by Jace Souza’s run-scoring single.

While Georgia played Hawaii tighter than any other team in the tournament, it was held scoreless in all 17 innings played between the two teams at the double-elimination tournament. Much of that was due to Kea, who also hit a walk-off, two-run homer to end the teams’ 11-inning game last week.

“He was better than I’ve ever seen him,” Georgia manager Patrick Gloriod said. “The kid has a split-finger (pitch) that’s just nasty and he kept us off balance.”

With two singles in Saturday’s contest, Georgia shortstop Tai Peete was the only player who mustered any sort of success in either game the team from Peachtree City faced Kea. Peete, one of the standout players in the entire tournament, was hugged by members of Hawaii’s team during its celebration.

“He’s a cool guy,” Kea said. “We just tried to pick him up because that’s what friends do when others are down.”

Choi Ji-hyung blasted his third home run of the LLWS, then struck out seven over 4 2/3 innings Saturday, giving South Korea a spot in the tournament championship with a 2-1 win over Japan.

South Korea will play Hawaii, which shut out Georgia 3-0 to win the U.S. bracket, in the Little League World Series championship on Sunday.

With two outs and nobody on in the first inning, Choi’s homer reached fans camped out beyond the left-field fence. He raised his right index finger in the air as he rounded first and jumped up to high five his third-base coach with both hands on his way home.

Though new bats in use at this year’s LLWS have caused home runs to become scarce, it was Choi’s second homer against Japan at the double-elimination tournament. He also hit one in South Korea’s 10-0 victory on Wednesday, and finished 4-for-5 with three RBIs across the two Japan games, scoring four runs.

through a translator. “We didn’t think the two runs would be the final runs.”

Choi Ji-hyung also started on the mound for South Korea, keeping Japan scoreless on three hits while he was in. But was pulled in the top of the fifth with runners on the corners.

Kim Yeong-hyeon came in to pitch a four-out save and allowed Masaumi Ikeuchi to hit a high double that dropped into right field and scored Kai Nogami, who reached base to lead off the inning when he was hit on the left wrist.

Kim struck out the next batter, Yuya Ito, to end Japan’s threat.

Japan’s offense, which scored 45 runs in their four-game sweep of the Japanese regional tournament, only managed 17 across its five games in Williamsport.

“I thought, because it was the same team, we won’t lose twice,” said Japan’s manager, Hiroyuki Takahashi through a translator. “But Korea, they were strong.”

With one out and one on in the top of the sixth, Japan sent to Masato Igarashi to the plate — hoping the 5-foot-9, 217-pound first baseman could bring some power to the team, which had failed to find much throughout the tournament.

Igarashi lined the third pitch he saw right into Kim’s stomach. Somehow, Kim not only held on to the ball but had the awareness to throw on to first, where he caught pinch-runner Takumi Nakata off the bag.

“Of course, it’s the joy of the tears,” said Su. “But the Japanese players are crying, so it makes us sad, too.”