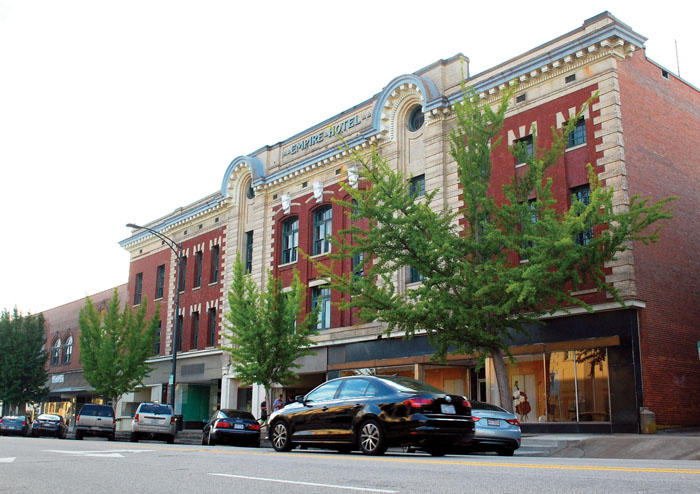 On Aug. 7, the City Council authorized the city entering a master lease for the Empire Hotel project and designating the hotel and the former Montgomery Ward department store as historic landmarks.

Janet Gapen, the city planning director, said then that if the council approved the master lease, the city would have to get approval from a state agency.

“There’s another subsequent step if the city does adopt the resolution to go into this master lease that also must receive approval by the state Local Government Commission,” Gapen said.

The Empire is scheduled to be discussed by the commission on Sept. 11.

Britt Weaver, developer of the Empire project, stayed until the end of the long Aug. 7 meeting, smiling as the council unanimously approved both items. But waiting for the Local Government Commission’s approval will delay the start of the renovation more.

“We’re stuck right now until we know that we have an official go,” Weaver said. “We’ve been stopped for five months.”

During the public-comment period, several downtown residents spoke about their excitement for the project and said they are hopeful it will be the face-lift that South Main Street needs.

“We have lived here in Salisbury for 32 years, and we’ve seen downtown go through a lot of transitions,” said Diane Young, who owns Downtown Graphics Network. “We have made a huge investment in this community. We’re thrilled to do so. The Empire Hotel has always been the white elephant holding downtown down. We have done everything that we can.

“We and other developers are taking care of the mom-and-pop buildings — if you will, the smaller structures,” Young said. “But this one, the numbers are impossible to make work. The numbers are very difficult. If it was easy, it would have been done by now.”

Steve Fisher, CEO and chairman of F&M Bank, agreed that the Empire Hotel block has been a white elephant and the renovation will give the area new life.

“We can continue to pay X and could continue to walk out this front door and stare at a bare old building that has never reached its potential or the economic potential that it has for downtown Salisbury,” Fisher said. “We will pay X tomorrow, the next day and the next day, potentially up to 10 years. Or we can choose tonight to continue to pay X for an $18 million (project), being able to walk out the front door and look across at a beautiful building that has reached its potential, hopefully full of residential spaces teeming and retail spaces teeming with new businesses.”

Weaver said he has noticed public support for the renovation, and that’s one reason Black Point Developers has continued to work through the challenges with the city.

“If we didn’t have public support, it would have been easy to go somewhere else,” Weaver said. “We’re always going to support Salisbury.”

Gus Andrews, a former Rowan County commissioner, said residents have concerns about the project and are scared it will be the next Fibrant, the city’s broadband service that is being leased to a private management company after years of falling short of revenue goals.

“The biggest concern is because of the Fibrant situation that we have and the taxes being paid that our citizens are scared to death over, that we might get involved in and have a responsibility down the road that if they go bankrupt or what have you, then all of a sudden we put another load on the citizens,” Andrews said. “I’m approaching that from all those people asking me to ask y’all to make sure that everything that we’re doing is a projection that we totally believe this will be totally successful.”

Another concern is parking for the apartments the Empire renovation will include. The city did a limited parking study, and a more comprehensive one is in the works.

Weaver said the lack of parking is a city issue and not a Black Point issue. But he said that isn’t necessarily a bad problem for the city to have because it means downtown is a desirable place to live and shop.

Gapen said with the City Council’s support of the Empire project, a final deal is closer as is the start of renovation.

“This project is so challenging,” Weaver said. “These things had to be accomplished. I’m glad it has been.”