Elizabeth Cook: Internet doesn’t have to be scary 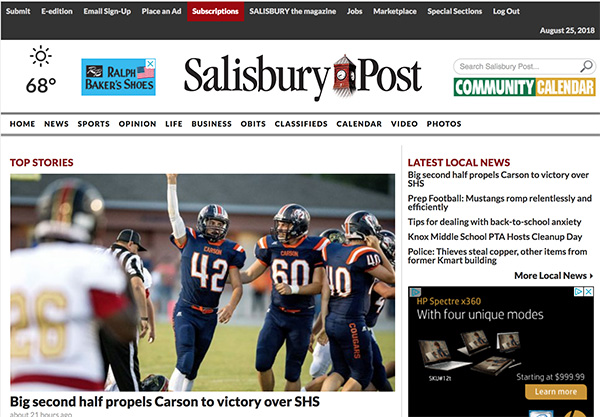 In the early days of the internet, I rationalized that online news could only go so far because newspapers were so much more portable than computers.

That obviously was before the days of laptops, tablets and smartphones, all of which allow you to carry the news with you anywhere and everywhere.

So much for foresight. The Salisbury Post has posted news online for years, and about half or more of the people who read our news online do so on their mobile phones. Reading on a phone was once a foreign concept. Am I the only one who remembers that?

Still, like many readers, I prefer to hold the paper in my hands. That, to me, is the best way to read it from front to back, be sure I’ve seen all the headlines — and work the crossword and Sudoku puzzles in the back.

The Post’s website has become even more important since we changed our publication schedule. On the days we don’t print the paper, Saturdays and Mondays, we encourage readers to turn to SalisburyPost.com.

Since making that change a couple of weeks ago, we’ve talked to subscribers who needed help registering for the site. Digital access is free to those who have a home subscription; you just need to register.

Some who signed up long ago have needed help recalling their username and password. We have people who can help with that.

The hard part is knowing loyal readers who just want the comfort of holding the paper in their hands every day, as they’ve done for decades. Older retirees who have never needed to use a computer are reluctant to start now, and they are frustrated with being forced in that direction in order to get their local news two days a week.

That resentment feels familiar. Last year my mother and I did battle with a couple of companies that had improperly billed her or sent products she didn’t want. The only way to contact customer service was online.

There ought to be a law against that, particularly among companies that market their goods and services to senior citizens.

Mom felt — rightly — that she was being discriminated against. She did not have internet service, a computer or a smartphone, and at 84 she did not want them.

She tried a computer course years ago at a community college, but it turned out to be aimed at programmers. She just wanted to learn to use the thing. It was like going in for driver’s ed and being told to rebuild the engine.

If Mom were still alive, I would nudge her toward getting an iPad or some other tablet, which is ideal if you’re primarily interested in reading and viewing, not “computing.” If she didn’t want an internet connection run to the house, she could have gotten a “hot spot” for connecting her device. That would have made her feel less left behind by the digital age.

She could have looked up questions herself, instead of calling and asking me to Google things for her. It’s amazing how much information is online. There’s an answer for everything out there, but you have to be careful about which ones to believe.

The online world is intimidating if you haven’t been a regular user. You hear the bad news about viruses, scams and hackers and are afraid to go anywhere near a computer. That’s OK. We all need to tread carefully and guard personal information, whether we’re talking to telemarketers on the phone or responding to an email online.

The thing is, you don’t need a computer course to learn to find websites you want to read. You just need a nonjudgmental person to explain the basics. There’s a job out there for some enterprising person who wants to take this on

What if we paired up seniors with young people and let them make a swap — wise advice for technical assistance?

I wonder whose eyes would glaze over first?