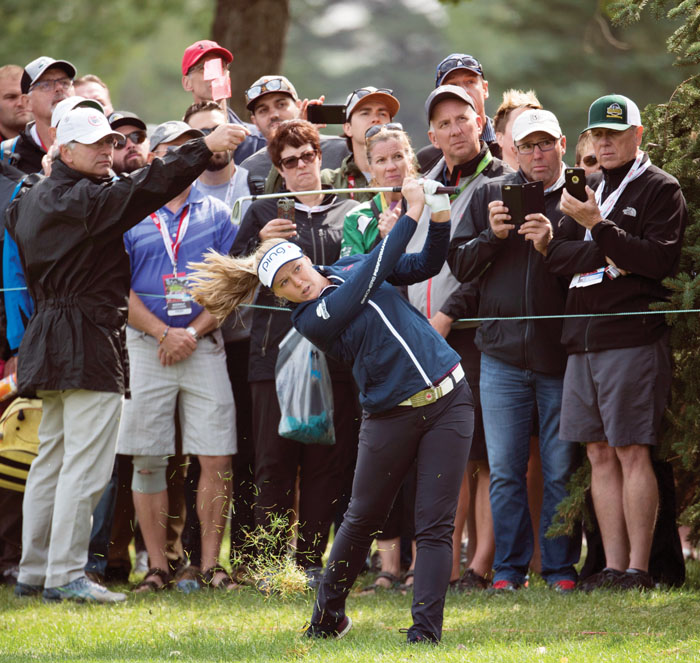 Brooke Henderson, of Smiths Falls, Ontario takes a shot out of the rough along the fifth fairway during the women's Canadian Open golf tournament in Regina, Saskatchewan, Saturday, Aug. 25, 2018. (Jonathan Hayward/The Canadian Press via AP)

REGINA, Saskatchewan (AP) — Brooke Henderson took the lead into the final round of the CP Women’s Open, fighting through gusting wind Saturday at Wascana Country Club in pursuit of a breakthrough home victory.

The 20-year-old Canadian star shot a 2-under 70 in clear and cool conditions to reach 14-under 202 and take a one-stroke lead.

“Very exciting,” Henderson said. “These crowds this week have been totally amazing, and I’ve been playing well for them, so I’m happy about that.”

Jocelyne Bourassa is the only Canadian to win the national championship, accomplishing the feat in 1973 at Montreal Municipal in the inaugural La Canadienne.

“I don’t know a ton, but she was an amazing golfer,” Henderson said. “To win the national championship at home, it’s truly amazing, especially in front of these crowds. I definitely will hope to be somewhat like her tomorrow and be able to finish the job.”

Henderson won the LOTTE Championship in April in Hawaii for her sixth LPGA Tour title. She again attracted a large gallery, with fans lining the fairways to watch her.

“It’s amazing to see all the little kids out here,” Henderson said. “If I high-five them or sign something for them, just their face kind of lights up, and it’s a really cool feeling for me. I remember being in their shoes, as well, and I know it’s really meaningful when somebody like myself spends that little bit extra with them.”

“The conditions have changed a lot over the course of the week and today it played really tough,” Henderson said. “I think you can see that on the leaderboard, as well. People were having some trouble with it. Hopefully, go out tomorrow, make a lot of birdies, and just kind of see what happens.”

Nasa Hataoka of Japan and American Angel Yin were a stroke back. Hataoka had a 69, and the long-hitting Yin shot 71, settling for par on par-5 18th after running an eagle putt long.

“Greens, obviously, got really fast,” Yin said. “I felt like I hit it pretty good at 17, but it flew past the hole. Then, wasn’t able to make the putt coming back. But overall my game was good. It was really cold. It was windy. The greens were extremely fast. I mean, I think I grinded it out pretty well today.”

Yin played alongside Henderson and Amy Yang in the final group.

“Of course they were cheering Brooke on,” Yin said. “I don’t want to get thrown out of the country for cheering for me. … It’s great to see all these people come out to support women’s golf.”

“It was definitely windy and it was very cold,” Hataoka said. “I’m playing better day by day, so I want to go out there with that confidence.”