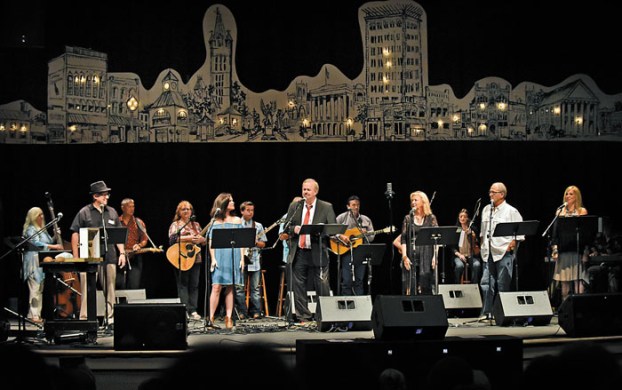 Kent Bernhardt, in the center, with The Moonglows and tje Vivian Pennington Hopkins & the Silver String Band in back on stage in the production of "Bury Home Companion." photo by Wayne Hinshaw, for the Salisbury Post

As the second production of the Salisbury Symphony’s “A ‘Bury  Home Companion,” drew to a close on Saturday, Kent Bernhardt said that Salisbury was a place of traditions.

Traditions like pulling over for funeral processions, he said, or the southern mother’s constant reminder that her children never leave home without a pair of clean underwear.

Or traditions like coming together to lift each other up when we’re down, of gathering around one another and making life better through support, said Bernhardt.

With a growing number of performances each year, the ‘Bury Home Companion show is certain to become one of these treasured, time-honored traditions for the Salisbury Symphony and its patrons alike.

A play on it’s namesake, “A Prairie Home Companion,” Bernhardt and his troupe of ‘Bury Home Companion Players did not disappoint. The performance harkened to that radio-style variety show feel of the once Garrison Keillor-hosted, public radio staple.

Original sketches and music were the products of Bernhardt and music director Kay Peeler.

Peeler and other creative minds saw that the show featured music of all genres: duo Sara Claire King and Eli Yacinthe returned this year, covering hits like James Taylor’s “Your Smiling Face” and Bobby Caldwell’s “What You Won’t Do for Love.”

Other performers took things out of the past and into the present, with gospel group Fortress and country star Rockie Lynne each performing original, emotional pieces that had audience members clapping along to the beats.

Gold Hill singer-songwriter Danny Basinger sang an original piece dedicated to a youth spent on the shores of High Rock Lake, one of many references to Salisburian gems throughout the night.

“Oh, I’m heading to the ‘Bury, strolling down the avenue,” sang Bernhardt. “I’ve got my Cheerwine. I look around for you.”

Sponsors Livingstone College, Catawba College, F&M Bank and Wallace and Graham each got their own jingles, with Kimberly Harrington from Livingstone and Brien Lewis from Catawba each providing vocals for their own.

A “Guy Noire” sketch began once again within the walls of College Barbecue, namedropping other staples along the way like Diversified Graphics, Salisbury the Magazine and Mean Mug Coffee.

Other sketches bemoaned certain Salisburian rights of passage. Characters Dusty and Ray commiserated over the never-ending construction of Interstate 85 in “The Lives of the Cowboys.”

“It’ll be so much easier for all of us when they finally get that part of the interstate complete,” said Ray, voiced by former symphony executive director Linda Jones. “We’ll all be dead then.”

“Salisburian Rhapsody,” a play on Queen’s “Bohemian Rhapsody,” shared the trials of a local woman as she attempted to ease her boredom during a Fibrant outage.

Rather poking fun or sharing in adoration, all of the show’s content was shared in good spirit and for the benefit of what symphony board member John Schaffer called “an amazing group of donors, sponsors, attendees, concert goers, musicians and administrative people that make the symphony what it is.”

“It’s been there for a half of a century,” he said. “We’re looking for another half a century. The reason it’s good and thriving and has continued this long is you.”

By Andie Foley andie.foley@salisburypost.com To the unsuspecting, the fellowship hall of St. Luke Missionary Baptist Church could have seemed unrecognizable... read more