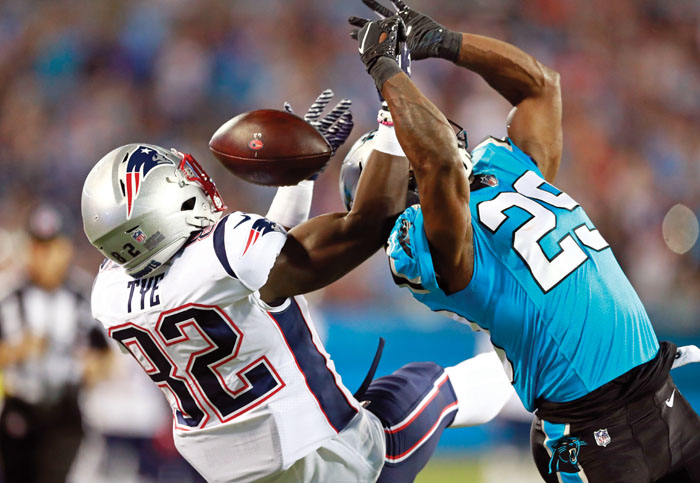 Carolina Panthers' Mike Adams (29) knocks a pass away from New England Patriots' Will Tye (82) during the first half of a preseason NFL football game in Charlotte, N.C., Friday, Aug. 24, 2018. (AP Photo/Jason E. Miczek)

By STEVE REED, AP Sports Writer
CHARLOTTE (AP) — Cam Newton walked into the interview room Friday night sporting a black eye and questioning his own judgment after an unexpected crash landing.
The Panthers’ eighth-year quarterback escaped a potentially serious injury when he scrambled out of the pocket and dove headfirst on a third-and-9 play in the first quarter, only to get upended by cornerback Jonathan Jones causing the 2015 MVP to land on his head.
Newton was forced to leave the game to be evaluated for a concussion, but returned four plays later and helped lead Carolina to a 25-14 win over the New England Patriots to remain unbeaten in the preseason.
“I was thinking to myself it’s the preseason, what do I do? What do I do?” Newton said while describing the run. “I was like I want to get a first down, but I want to bring this plane in as smoothly as possible.”
The landing was anything but smooth.
As Newton was contemplating how to avoid contact, Jones hit him low, flipping the QB off his legs and sending Newton spiraling into the air.
“There were a lot of malfunctions going on from the cockpit,” Newton said with a laugh. “Buttons were getting stuck. It was bad. It was real bad.”
Newton didn’t have a concussion, but said his noticeably swollen left eye was hurting. Newton said he received the black eye from his own helmet when he hit the ground.
He joked it was his first black eye since getting in a fight in middle school.
Newton finished 11 of 17 for 142 yards passing and led three scoring drives — all resulting in field goals — as the Panthers built a 9-3 lead at halftime.
“I always worry about him, but that’s him — he plays to win,” Panthers coach Ron Rivera said. “I would much rather he didn’t (do that), but he’s going to give us all he has because he wants to do the best he can out there.”
Tom Brady’s night wasn’t nearly as eventful for the Patriots (2-1).
It was a quiet game for the five-time Super Bowl champion, who completed 12 of 18 passes for 102 yards in the first half and got the Patriots in field goal range twice. But drops and costly mistakes proved pivotal for the Patriots, who were limited to 130 yards in the first half.
“Our execution needs to be better,” Brady said. “You look back at a lot of the things and it’s a lot of us. It’s not so much what the other team is doing.”
WHO’S THE GUY?
With Julian Edelman suspended for the first four games, Brady will be looking for a go-to guy. He hooked up four times with Phillip Dorsett for 36 yards and once each with Cordarrelle Patterson and Chris Hogan for 10 yards.
“We’re going to have to be on the same page and we have two weeks to figure out who is going to be out there doing it,” Brady said.
MCCAFFREY BUSY AGAIN
Panthers running back Christian McCaffrey continued to be a major player on offense, touching the ball 10 times for 51 yards on Carolina’s opening drive which lasted nearly 10 minutes.
OTHER SCORES
Backup quarterback Taylor Heinicke scored on a rollout in the second half and Garrett Gilbert connected on a TD pass to Mose Frazier for Carolina’s only touchdowns. New England’s only touchdown came with 2:51 left when Mike Gillislee scored on a 2-yard run. Rivera said both Heinicke and Gilbert are proving worthy of a roster spot as they battle for the No. 2 spot behind Newton.
NATIONAL ANTHEM
There were no on-field protests during the playing of the national anthem.
INJURIES
Patriots: Running back Jeremy Hill, who is battling for a roster spot, left the game in the fourth quarter with an ankle injury and didn’t return.
Panthers: Already without three starting offensive linemen, Carolina lost starting offensive tackle Jeremiah Sirles on the game’s opening drive to a hamstring injury. He did not return.
NEXT UP
Patriots: Visit Giants on Aug. 30.
Panthers: Visit Steelers on Aug. 30.
___
More AP NFL: http://pro32.ap.org/salisburypost/