Delicate as a Flower and Tough as Steel: An interview with the ‘Steel Magnolias’ director 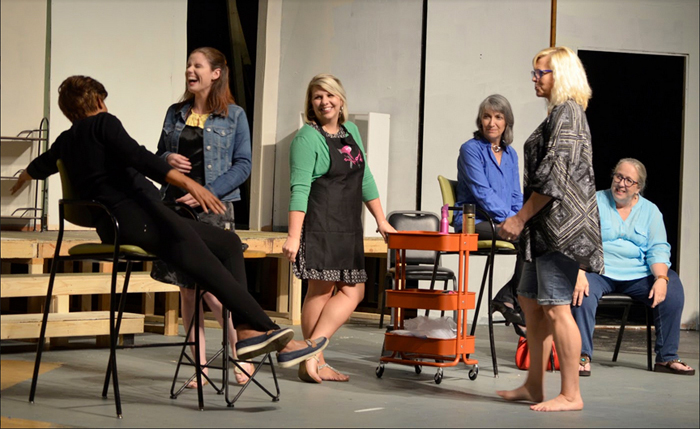 Lee Street theatre’s currently running southern comedy, “Steel Magnolias,” includes familiar faces and those new to the Lee Street stage. Directing the first show of the new season, that also happens to be a beloved classic, comes with high stakes and lots of excitement, so marketing director Caitlin Billings sat down with director Kindra Steenerson to discuss her directing process and how the devout fans of Steel Magnolias impact the show.

Steel Magnolias first premiered Off-Broadway at the WPA Theatre, in New York City, on March 28, 1987. What makes this play so relevant today, over 30 years later?

I think what makes the play so relevant today, and [what] sometimes gets lost in the 80s-ness of it, are the more universal themes inherent in the story. Women are strong, and stronger together, and have historically been the glue holding communities and families (of various types) intact. A mother’s love transcends pain and logic, and a daughter will take her mother for granted until she’s ready to understand the sacrifices that were made on her behalf. Of course, the major transcendent factor is that none of us will escape loss and grief in this life. And leaning into our relationships with others allows those of us who are left behind to carry on. It’s also a great reminder that humor is a powerful survival strategy!

Steel Magnolias, though a play first, is a beloved story due to the popularity of the 1989 film adaptation. How do you bring a fresh take to a show of such popularity?

That’s a tough question and one I’m still grappling with. There is so much nostalgia surrounding this play. And the fact that it’s a tribute to the playwright’s sister who passed in the 80s makes it feel transgressive to set it in any other time with more relatable pop culture references. On the other hand, it’s not a play about the 80s, it’s a play about those larger themes of sisterhood, communal stewardship, and survival. I like the idea of reminding ourselves of those things in this contemporary, and divisive, moment.

What was the number one quality you were looking for when casting Steel Magnolias?

I was looking first for what I always look for, which might surprise those expecting my answers to be skill or talent — although those are obviously things I’m looking for too, generosity. Especially for an ensemble piece like this one. I needed folks who were present and listening and enjoying each other.

Describe what the rehearsal process has been like directing a cast of six women. How does this process differ from others you’ve experienced?

I love working with actors in general, but there is a different vibe when it’s all women. All female casts, in my experience, have been exceptionally supportive of one another and the production team, in general. And their warmth and humor just emerge in a way that’s freer somehow.

The cast of Steel Magnolias includes actors of every experience level, newcomers to seasoned performers. How do you adjust your directing style to accommodate their skill sets?

I think it’s always a challenge when the cast has mixed experiences, but I never adjust my expectations for the work. What I do try to accomplish is a clarity surrounding both the expectations and the approach to the process, and let all involved know I’m open to any questions, challenges, ideas. Ultimately, what makes it work is the natural mentoring that emerges from the more experienced performers modeling a strong rehearsal work ethic and process.

You also directed Dixie Swim Club last season. How does that process compare to directing Steel Magnolias? How does it differ?

Working with both casts has been amazing. What the processes have in common is that each cast is comprised of smart, sassy, serious-minded, and often silly women who support one another and the process one hundred percent. Walking into rehearsal for each has felt joyful, not stressful. I would say the main difference is in regard to content. Steel Magnolias is pretty dense language-wise, and a bit more devastating emotionally.

Why do you think Steel Magnolias is a great fit to open Lee Street’s 11th season?

I think it has a distinctive regional flavor that Lee Street audiences will gravitate toward. It’s got humor and substance. We’re using that famous southern hospitality to open the door for a great season.

What can a person expect when they go to see Steel Magnolias? What is the vision?

They can expect us to honor the story, but not belabor the 80s excess. The vision was to give the appropriate nods without getting lost in shoulder pads and hairspray. We want the women and their relationships to be the heart and focus.

How would you describe Lee Street theatre to someone who has never heard of us before?

Scrappy and professional. Home. I credit Craig [Kolkebeck] with modeling a serious, yet supportive, approach to the work done at Lee Street.

How long have you been directing?

Who are some of your favorite directors? Who influences your work?

I had the amazing opportunity to study for a month this summer with Anne Bogart. She and her collaborators in the SITI Company have been major influences on how I conceive of a process, and the notion that the ensemble and each actor-creator is sacred. I tend to gravitate toward auteurs like Joanne Akalitis, Ariane Mnouchkine, and Julie Taymor.

What do you hope to take away from this experience?

One of the things I’m already taking away from it is the reminder that our time in the world, and with our people, has the potential to be brief, or painful, or sometimes disappointing. It’s important to keep things in perspective, cherish your friends and family, and work hard at being the kind of person to give in-kind all that you’re willing to take. I also hope it’s a roaring success and that the production team and cast have a positive experience!

Ticket sales are reaching unprecedented heights with the release of Steel Magnolias seats. We have already sold out our August 23rd-August 31st performance dates. The rest of our performance nights are well on their way to being filled as well. We have even added performances September 6th and 7th due to the high demand. You don’t want to miss this hysterical and touching play.

Riot at New Sarum: The Burger Bash at the…