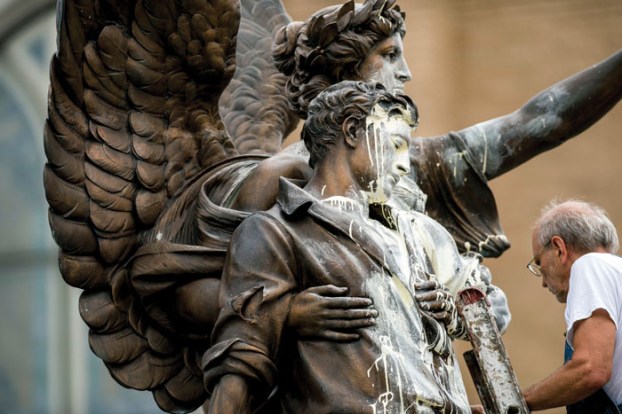 What online readers are saying about … Fame and reconciliation

… ‘Time to have cool heads,’ mayor says after vandalism of monument

The statue shouldn’t have been defaced but it also doesn’t belong in the middle of town on “private” land.

News flash: The Civil War wasn’t fought because of states’ rights, plural, it came down to one particular right which was the Southern states’ right to continue the slave trade.

Do some reading. I would suggest the articles of succession for each state and the cornerstone address by confederate VP Alexander Stephens. They didn’t try (at least not very hard) to hide it then; why are so many hell bent on hiding (or denying) it now?  — Jacob Parks

This is a veteran’s monument — Myra Kay Janke Moore

Thank you, Mayor Heggins, for your quick reaction and wise words. — Kathy Vestal

The owners could do the community a favor by re-christening the statue as a general war memorial statue, honoring all from Salisbury and Rowan County who have given their life for country. — James B. Carter

You cannot rewrite history to make it politically correct. Auschwitz was not torn down completely, so the world would look at it and not forget. We cannot erase the memories of war, nor should we. We don’t celebrate memorials of death; we need to remember so as not to repeat. — Linda Mundy White

White paint looks racist. The statue is a part of this town. More should be done to the person responsible. — Tika Ann Davis …

Whoever did this, black or white, needs to be brought to justice and punished not only for vandalism but also for trying to cause a separation of the races. We all must come together and work these things out before we become another Charlottesville, Virginia. — Michael Hawkins

There is a difference between remembering and celebrating. The people who did the lynching are the same ones who put up this memorial to traitors against the United States, as a symbol of Jim Crow. If you want to “work these things out” work to take the monstrosity down and replace it with a monument to the brave men from North Carolina who fought for their country instead of against it. — J. Edwin Ryan

If we love it, we will let it be put in a museum somewhere. If we really were ready to put the past behind us, we would replace it with a new monument dedicated to unity and progress. To do nothing is to watch it get destroyed, and that’s not fair to anyone, in my opinion. — C.J. Peters

We hear so often of the Jim Crow laws of the South, but we never hear of the Black Codes of the North, such as in Illinois, land of Lincoln, that essentially forbade blacks from being in the state for more than 10 days. — Bill & Jackie Starnes

Many of us who advocate for the removal of these monuments from public lands and prominent, conspicuous public view also recognize, and often point out, the systemic racism of the North, even during, and before, the outbreak of the Civil War. However, we also recognize that monuments honoring the “Lost Cause” are particularly painful to a significant portion of our population who are still suffering from the generational impacts of chattel slavery. — Mike-o Martelli

It is amazing that people would be so incredibly outraged over paint on a statue commemorating the worst time in our nation’s history, but could care less about paying homage to actual lynching victims. — Billie Cunningham It was only a matter of time — surprised it did not happen sooner. To whoever did this, you just united the right and the left. — Mark Lyerly

So in this vein of logic of moving something to protect the public from unnecessary safety risks, the element of convenience must be sacrificed and all of the Walmart parking lots should now be moved far away from their presently adjoining stores. For we know from a wealth of experience how dangerous the Walmart parking lot can be. — Mack Williams

Does anyone else find it illogical that many who responded to the resolution of reconciliation for healing regarding lynchings that took place here in Salisbury cried, “It’s in the past. Move on,” are also saying, “It’s our history. We must preserve it” regarding the Fame statue? So we only want to preserve and acknowledge selected parts of our history? If you stand for preserving history then you must support the resolution and also support the relocation of Fame so as to preserve it as well. … Healing and relocation for the future hope and prosperity of all our citizens is a very, very, very small request. — Renee Wimpish

Fame, in my humble opinion, can be viewed as a memorial to the poor noncommissioned Confederate soldier who fought and died for those who exempted themselves from serving the Lost Cause. The soldier with the broken gun being carried to glory by an angel is an allegory for the salvation of those who fought for slave holders to the detriment of their earthly well-being. Nothing should happen to Fame other than being moved to a more suitable place such as across from the historic National Cemetery or near the graves of the Confederate soldiers in the Old Lutheran Cemetery — Reginald Brown

Why are we judging the past by today’s standards? You cannot learn from that which you eradicate. While fools focus on an inanimate object being destroyed as a cure for racism, nothing is truly being done to help prevent or stamp out racism. — Melinda Swain

Why tear down? Why not work together to create another statue more reflective of where we are today and how far we’ve come? Find a nice home for it on Innes Street. “Where do you think all these appalling wars and quarrels come from? Do you think they just happen? Think again. They come about because you want your own way, and fight for it deep inside yourselves.” — James 4, The Message — Chris Shoaf

I am so tired of vandalism not only being accepted but being rewarded. Wrong is wrong, plain and simple. — Dennis Thomason

You, along with almost all the other media, are using an incorrect word. According to the Cambridge online dictionary, the definition of “protester” is:  1. someone who shows that they disagree with something by standing somewhere, shouting, carrying signs, etc.  2. someone who protests publicly about something, especially as part of a group:  3. someone who complains strongly about something: The correct word here is “vandal.” Definition: A person, often in a group, who intentionally damages public or private property. We allow and protect protesters. We arrest and prosecute vandals. (At least that’s the way it’s supposed to be.) Incidentally, thanks for using the correct word in describing the damage to the Salisbury monument. — Charles Baker

By Sharon Randall We celebrate some birthdays with a bounce house. Others we observe quietly in our heart. But every... read more