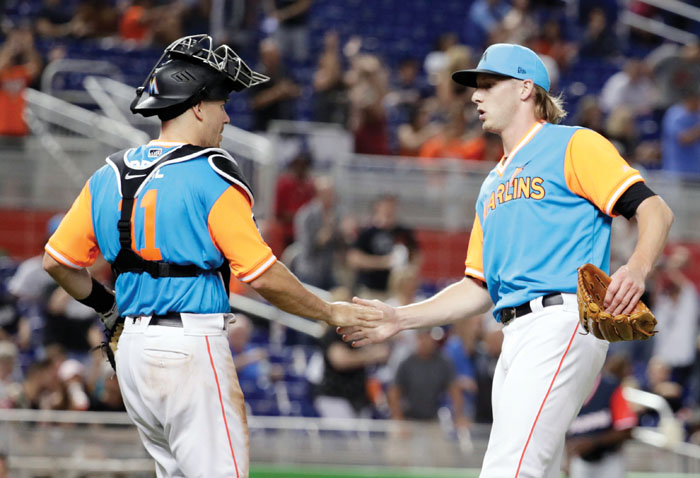 MIAMI (AP) — Dan Straily combined with three relievers on a three-hitter, and the Miami Marlins snapped a seven-game losing streak against the Atlanta Braves with a 1-0 victory Friday night.
Straily (5-6) allowed three hits, walked one and struck out four in six innings for his first win since June 20. He retired the final nine batters he faced after Freddie Freeman’s leadoff single in the third. That was Atlanta’s final hit of the game.
Dayron Guerrero and Drew Steckenrider worked the seventh and eighth, and Adam Conley pitched a perfect ninth for his first save in his second opportunity.
The win was Miami’s first over Atlanta since July 24, a span that included a rain-shortened two-game sweep and a four-game sweep by the Braves. Atlanta maintained a three-game lead over the Philadelphia Phillies in the NL East.
Mike Foltynewicz (10-8) retired the first 11 Marlins hitters until Brian Anderson’s double to left-center in the fourth. Derek Dietrich followed with an RBI single that gave Miami its only run.
Foltynewicz allowed two hits, walked two and struck out eight in six innings. The Marlins also got only three hits in the game.
The Braves threatened in the second, when Straily allowed a one-out double to Johan Camargo and walked Ozzie Albies. Straily induced an inning-ending double-play grounder from Tyler Flowers.
REALMUTO’S STRUGGLES
J.T. Realmuto went 0 for 3 and is now hitless in his last 16 at-bats. Realmuto’s last hit came in a 2-for-5 performance against Washington on Sunday. He remains one home run shy of tying his regular-season high of 17.
SLICK GLOVE WORK
Braves shortstop Dansby Swanson stretched and retrieved pinch-hitter Isaac Galloway’s grounder toward center field in the seventh. Swanson used his glove to flip the ball to second baseman Albies and retire Miguel Rojas on a forceout.
TRAINER’S ROOM
Braves: C Kurt Suzuki missed his third straight game because of bruised left triceps. Suzuki sustained the injury after he was hit by a pitch in the ninth inning of Atlanta’s game against Pittsburgh on Tuesday. Manager Brian Snitker said Suzuki was available to pinch-hit.
Marlins: As expected, LHP Jarlin Garcia was placed on the 10-day disabled list. Garcia was hit on the left leg by a line drive from Atlanta’s Nick Markakis in the fifth inning of Thursday’s series opener. To make room for Garcia, Miami reinstated RHP Kyle Barraclough from the DL. … The Marlins placed RHP Elieser Hernandez on the 10-day DL because of a blister on his pitching hand and recalled RHP Ben Meyer from Triple-A New Orleans.
UP NEXT
Braves RHP Anibal Sanchez (6-4, 3.13 ERA) will start the third game of the series on Saturday. LHP Wei-Yin Chen (4-9, 5.20) will start for Miami.
___
More AP MLB: https://apnews.com/tag/MLB and https://twitter.com/AP_Sports